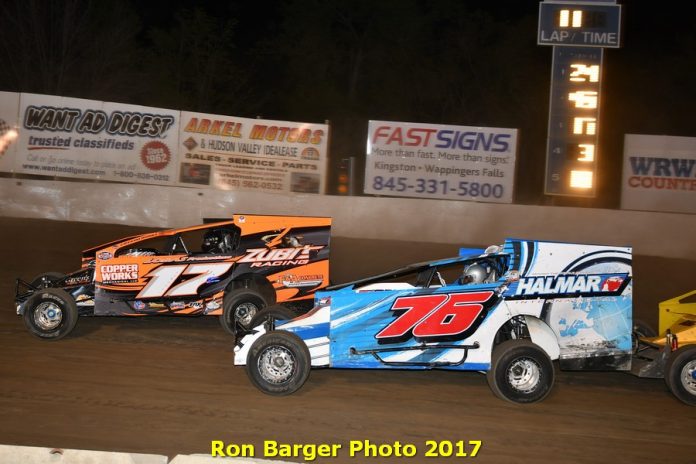 ACCORD, NY – You better hang on tight for this 12-second ride!

On Monday, July 3, the Bob Hilbert Sportswear Short Track Super Series (STSS) Fueled By VP makes its annual stop at Accord Speedway for a 50-lap, $5,000-to-win Modified clash at the Ulster County bullring.

Gary and Donna Palmer’s pristine quarter-mile oval plays host to Round No. 4 of the STSS Halmar International North Region with the ‘Battle of the Bullring 5’ on the eve of Independence Day.

Joining the STSS Modifieds on the docket are STSS Sportsman in a $1,000-to-win, $100-to-start event and Slingshots.

Entering the ‘Battle of the Bullring’ at Accord, there have been three winners in as many STSS North Region events. Andy Bachetti thrilled the crowd in April at the Orange County Fair Speedway (Middletown, N.Y.) ‘Hard Clay Open’ with a 20th-to-first drive.

At Thunder Mountain Speedway (Center Lisle, N.Y.) in May, Anthony Perrego struck gold with a ‘Lightning on the Mountain’ conquest.

The Afton score pressed Friesen into the series point lead with Accord’s tight confines on the horizon.

Updated point standings can be found at the following link:http://bdmotorsportsmedia.com/2017-halmar-north-region-standings/

The ‘Battle of the Bullring’ celebrates its fifth anniversary his year. Danny Creeden won the inaugural event in 2013. Perrego was the ’14 victor, while Jackie Brown Jr. drove to the ’15 score. Last year, Friesen broke into the Accord win column for the first time in his career after a battle with Erick Rudolph.

Complete information on the ‘Battle of the Bullring 5’ has been posted:http://bdmotorsportsmedia.com/battle-of-the-bullring-5-rules-prices-general-info/