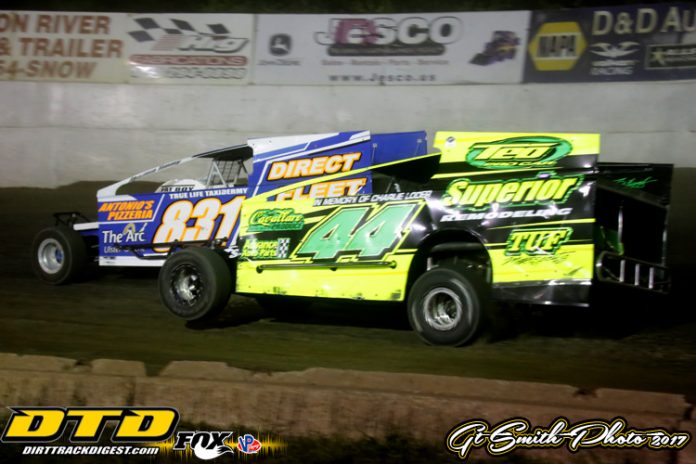 ACCORD, NY – On the first lap of Monday night’s ‘Battle of the Bullring 5’ at Accord Speedway, Anthony Perrego thought he gave away his chances at a victory.

On the last lap, he got those chances back.

Perrego, of Montgomery, N.Y., wheeled the Superior Remodeling No. 44 to a Bob Hilbert Sportswear Short Track Super Series (STSS) Fueled By VP big-block/small-block Modified triumph in the most spectacular fashion: with a last-lap, last-corner pass of Jimmy Wells to take home a $5,000 payday.

The win for Perrego was his second of the 2017 STSS season, having previously won on the eve of Memorial Day at Thunder Mountain Speedway in Center Lisle, N.Y.

It was also win No. 2 of the young driver’s career in the ‘Battle of the Bullring’ event. He also won in 2014.


The fifth ‘Battle of the Bullring’ edition literally packed the Accord pit area with 40 STSS Modifieds, 60 STSS Sportsman and 15 Slingshots on hand for a total of 115 race cars.

“I thought I gave it away on the first lap,” Perrego said after climbing to the roof of his Teo-Pro car on the frontstretch before a large crowd. “I got crossed up and gave away those spots and I had to work to get them back.”

Perrego started outside front row for the 50-lap main but got momentarily sideways in turns one and two at the outset, falling to fourth.

Pole starter Rob Rowe led the opening four laps around the tight quarter-mile before the race’s only caution flew. Jimmy Wells established himself as the new leader on the restart.

By the 14th circuit, slower traffic became a factor as the leaders caught the rear of the 27-car starting field. The veteran Ricci used the back-markers to his advantage, pulling even with the leader on several occasions.

However, Ricci’s bid for a win ended at lap 25 when the New Paltz, N.Y., driver pulled to the infield with fluid pouring from the car.

Perrego then inherited second and began a pursuit of Wells – a Modified rookie – that lasted some 24 laps.

Wells’ No. 831 led lap after lap around the Ulster County track. However, slower traffic allowed Perrego to pull to his bumper with parallel flags in the air from starter Jeff Merkel.

On the final tour, Perrego swung wide in turns one and two, getting a run on Wells who was hung behind slower cars. As Wells drifted wide in turn two, Perrego filled the gap.

The leaders raced side-by-side through turns three and four, with Perrego winning by a bumper at the line as sparks flew.

“I didn’t want to show myself too soon under him so he could protect,” Perrego said of Wells. “He spun his tires enough in (turn) two on the last lap and I had a run.”

Wells, of Rosendale, N.Y., fell just inches short of what could have been a huge upset. Still, he managed a smile afterward.

“This is my first year in a Modified,” he said. “I’m happy to finish second, but the lapped cars made it tough on me. They weren’t giving the room I needed.”

Billy Decker of Sidney, N.Y., made his first Accord start in four years and drove to a third-place result with the Jeremy Smith-owned No. 91.

“It took me about 20 laps to get my rhythm down out there,” said Decker, who has limited laps at the Big A. “Once the driver figured it out, we were fast.”

After a race-long battle with Decker, Walden, N.Y.’s Rob Rowe finished fourth, an outstanding run for the low-budget driver. Completing the front five was Jerry Higbie of Newburgh, N.Y., who started 12th, drove forward in the United Pump & Tank-owned No. 48.

Placing sixth through 10th, respectively, were J.R. Hurlburt of Otego, N.Y., in his Accord debut aboard the Jamie and Denise Page-owned No. 6H; Mike Ricci of Tillson, N.Y., who started 19th in the No. 76R and earned the New York Truck Parts $200 Hard Charger Award; speedway regular Joe Judge of New Paltz, N.Y.; Tommy Meier of Waldwick, N.J., driving the Jeff Behrent No. 3; and Scott Ferrier of Bloomingburg, N.Y.

The Modified feature was completed in just over 13 minutes.

Kyle Rohner of Bushkill, Pa., topped the 25-lap STSS Sportsman feature in impressive fashion. Rohner, who started fourth, lost his left-front shock in a restart tangle less than one-third into the event, and manhandled the car to the $1,000 payday.

Taylor Mills won a back-and-forth battle with Samantha Muller to annex the 20-lap Slingshot main and the accompanying $300 payday. Muller settled for second with Jake Mason, Jordan Lawrence and Ashton DeWitt in tow.

Racing resumes for the STSS on Sunday, July 16 with the ‘Anthracite Assault’ at Big Diamond Speedway in Minersville, Pa., featuring the Halmar International North Region and Velocita-USA South Region in a combination head-to-head battle plus STSS Sportsman and Roadrunners. The Big Diamond event had been postponed by rain in June.

BULLRING BITS: A very healthy pre Independence Day crowd congregated at the Ulster County facility, filling every inch of both the spectator parking lot and pit area. Despite the huge car count, racing was completed in its entirety by 10:45 p.m. with no downtime….

Perrego’s Accord conquest was the fourth of his STSS career: two at Accord, one at Thunder Mountain and another at Georgetown (Del.) Speedway….

Series regular Craig Hanson was done for the night with engine issues in hot laps….

The ‘Battle of the Bullring 5’ took place one day shy of 25 years since Accord Speedway reopened on July 4, 1992. The track had been dormant for several years before it was purchased by Dave Flach….

Did Not Start: Ashley Rogosich.