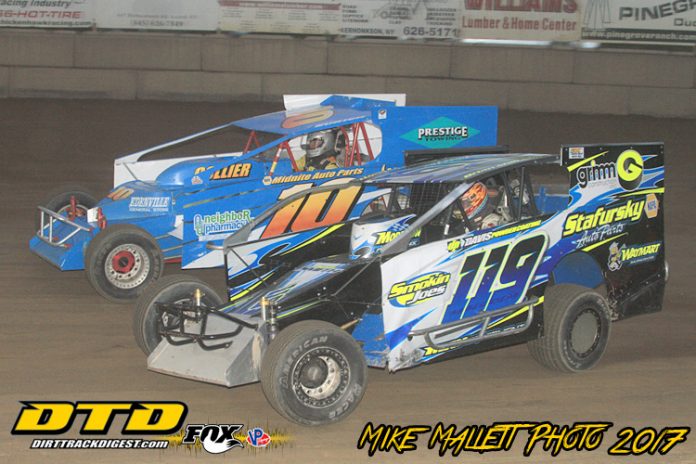 ACCORD, NY – Accord Speedway Promoters Gary and Donna Palmer will be hoping for some great weather this coming Friday evening, August 4th as the speedway pays tribute to local Modified legend Ernie Beesmer who passed away September 16th, 2016 at the age of 80. Beesmer was a fine racer and a feared competitor to all those who raced against him or from those who witnessed the exciting action from the grandstands. The Friday evening event will be sponsored by Emmanuel’s Marketplace located at 3853 Main Street at the Stone Ridge Towne Center on Stone Ridge, New York. (www.emmanuelsmarketplace.com)

The memorial event for Beesmer will pay the winner $2,888.00, in honor of the numbers frequently used by Beesmer during his racing career. The event is expected to bring out some additional invaders for the racing action and a strong field is expected in hopes of earning a big payday.

Ernie Beesmer began his racing career in 1957 at the former Rhinebeck Speedway, a fifth mile pavement track. He followed up by returning to the speedway in 1958 and enjoying good success. In 1959 Beesmer switched to dirt by competing at the Grahamsville Speedway. Beesmer stepped up his game in 1960 and 1961 by racing at both Grahamsville and the Lebanon Valley Speedways. Always seeking new avenues to excel, Beesmer raced Lebanon Valley, Middletown, Onterora and White Lake in 1962 and in 1963 dropped Middletown from his schedule. Adding Accord to his weekly agenda in 1964, Beesmer was the track champion. Remaining closer to home in 1965, Beesmer raced at Accord and Onteora and was second in points at Accord. The 1966 season found Beesmer returning to Lebanon Valley and also competing at Onteora in what would be his last season behind the wheel.

Beesmer had a unique gift in that he could drive well at any track, whether it be dirt or pavement or the length of the facility. Beesmer was quite adept at finding the fast lane. Beesmer helped build the Onteora Speedway (Olive Bridge) and he also knew the quick around the oval at that facility.


Beesmer was inducted into the Hudson Valley Historical Racing Hall of Fame in 2014 for his exploits on the raceway as well as his dedication to the growth and future of the sport. Three generations of Beesmers competed at Accord in the past with Ernie, his son Phil who raced Lightning Sprints and Grandson Matthew who raced the Four Wheel Quads.

August 4th is Emmanuel’s Marketplace Night at Accord Speedway with all divisions racing and highlighted by the Ernie Beesmer Memorial Modified event paying $2,888.00 to win.