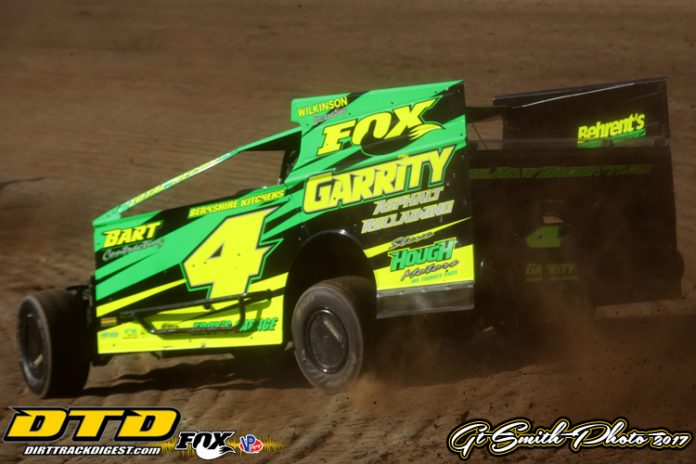 ACCORD, NY – On a hazy but warm summer day in the Catskill Mountains of New York State that threatened to rain but didn’t, the Accord Speedway swung back into race mode on Friday evening. With temperatures in the low 80’s and a warm gentle breeze blowing across the speedway grounds, Promoters Gary and Donna Palmer reeled off an outstanding racing card for the large crowd on hand that witnessed the excellent racing action. The superb evening of speed was sponsored by the good folks at Emmanuel’s Marketplace  (www.emmanuelsmarketplace.com) and was highlighted by the running of the Ernie Beesmer Memorial event for the Modified division. Even though the racing was held up and began later due to a faulty ambulance, all of the events were completed by 11PM.

The final outcome of the great evening of racing action found “The Wild Child” Andy Bachetti returning to the Accord Speedway in a one night flight from his regular track to steer his Garrity Asphalt Reclaiming sponsored hot rod to his first Accord Speedway win in quite some time. He chose the right time to return as he garnered in a whopping $2,888.00 for his win in the Ernie Beesmer Memorial in the United Pump & Tank Modified headliner.  Brandon “Juan Pablo” McGill nailed down his second win of the season in the Arkel Motors Sportsman finale.  “The Highside Hustler” Eric Jennings was spot on as he recorded his fifth win of the season in the WRWD Radio NEWS Sprint Car feature event.  Veteran campaigner Emerson Cargain Jr added his second win of the season as he raced to victory in the hotly contested Upstate Auto Pure Stock ranks. Ryan McCartney captured his second win of the season in the WRWD Radio Rookie Sportsman main event as he dominated the action in a wire to wire run. “The old Spring Kid” Jake Mason continues to excel at Accord as he wired the field for his seventh win at the speedway in the Want Ad Digest Junior Slingshot finale.

“The Concrete Kid” Kyle VanDuser used a front row start to kick off the United Pump and Tank Modified event and VanDuser would lead first nine laps of the 30-lap main event. “Primetime” Scott Ferrier stayed close as he quickly drove into the runner-up slot from his seventh starting position to tail VanDuser.  Ferrier drove by VanDuser on lap ten and brought with him a high flying Anthony Perrego. Perrego challenged Ferrier but coming into the fight would be Andy Bachetti as he moved into third from his twelfth starting position. Bachetti was on a mission and could place his car in any channel of the speedway and be fast. He moved to the topside of the speedway on lap fourteen and passed both VanDuser and Perrego to assume command of the lead.

A restart closed the field on lap-19 but on the restart Bachetti opened up a huge lead on the field. As Bachetti got into slower traffic, Perrego was able to close the gap and make it close but Bachetti flashed under the checkered flag at the end of the thirty lap event a much richer man. Perrego was the runner-up in a solid drive from 11th starting place, Jerry Higbie came on strong at the end to finish third with Scott Ferrier and Danny Creeden completing the top five. The second five in order were Rich Ricci Jr, current point leader Danny Tyler, Mike Ricci, Richard Smith and Kyle VanDuser.


The Arkel Motors Sportsman event proved to be a great race as Chris VanDuser found the fast line at the top of the raceway and powered into the lead. Rich Ricci III followed VanDuser and the two broke away from the field early on. Some skirmishes would slow the action down on a few occasions but Brandon McGill on each restart would begin to make subtle moves on the leaders. McGill went to work on Ricci and slipped past him and then went to work on VanDuser. McGill took over the lead on lap-13 and while leading had to fight off the advances of Ricci and Kyle Rohner.  The three way battle was exciting down to the last turn but McGill would not be denied on this night as he nabbed his second win of the season at Accord Speedway. Ricci III was second with a great performance while Rohner settled for third. Tony Kowlachuk and Tyler Johnston completed the top five. third. Following the top five were Corey Cormier, Dana Carey, Chris VanDuser, Shane Henion and Matt Shultz.

The WRWD Radio Rookie Sportsman feature attraction found Ryan McCartney with the hot hand as he powered into the lead at the drop of the green flag and he would open up some distance on the field with Michael Corbin in pursuit. Hunter Lapp would find his way to the front and moved past Corbin into second. McCartney would prove to be fast as he drove away from the field to secure his second win of the season. Lapp enjoyed a great run for second with Corbin third, Vinny Visconti fourth and Alex VanPelt fifth. The entire top five came through the ranks of Slingshot racing lending credence to the importance of starting out the drivers in a class where they can learn the ins and outs of racing and then be able to make a successful transition to the full-size cars. Kevin Stevens, Jeff Higham, John Miller, John Brown, John DeWitt and Keith Johannessen would complete the rest of the field.

Austin Smith grabbed the early lead in the Upstate Auto Pure Stock main event and would lead through the first three laps. Emerson Cargain Jr found the open channels of the speedway down low and powered into the lead. It proved to be the winning pass but behind Cargain four additional drivers were driving hard to find the winning move of their own. Travis Brockner pulled out all of the stops and pulled even on occasion but could not muster up a few more horsepower to unseat Cargain from the lead and he settled for second. Steve Williams was third with John Hechinger continuing to do great work with a fourth place finish while Chris Kanuk finished fifth. Austin Smith, Harry Bachman, Craig Cuneo and Ray Tarantino completed the field.

Bobby Tersillo grabbed the lead at the start of the WRWD Radio NEWS Sprint Car feature event. Tersillo was enjoying his best run of the season but jumped the cushion allowing Eric Jennings to make the winning move under him to take command of the lead. The move made the rest of the event purely academic as Jennings raced away from the field to gather in his fifth win of the season. Larry Ricci was a strong runner-up with Tersillo third, Larry McVay fourth, Andrew Davis Corey Wood, And newcomer Duane Nixon completing the field.

Jake Mason started from the inside pole position and quickly raced in to the lead at the start of the event. Mason opened up a big lead in the race and coasted to his seventh Accord Speedway win. Jaden Sleight was second with Ashton DeWitt third, Brock Pinkerous fourth and newcomer Kao DeWitt fifth.

The good friends from Emmanuel’s Marketplace were the headline sponsor for the evening.

New entries were arrived at the speedway as Tom Vasta and Anthony Recchio returned to action but both drivers stepping up to the Sportsman ranks.  Duane Nixon was on hand with his Northeast Wingless Sprint Car in his debut and ran strong in his first Accord start.  Kai DeWitt made his initial start in the Junior Slingshots with a K number reminiscent of a Karl Pittenger Modified.

A nice group of friends of Ernie Beesmer were on hand talking about Ernie and his exploits on the raceway. The photographs and trophies take one back to a more carefree time in life when things just seemed to go a lot easier than they do nowadays. Thank you to all of Ernie Beesmer’s friends for a great evening at Accord.

The Gary Phillips Crew drove up from New Jersey to cheer for Kyle Rohner. Rohner steered the Phillips 600 Sprint at Hamlin a couple of seasons ago and Rohner has a lock on the one lap track record at Hamlin for the division. The car was sold by Phillips to graphic design man Adam Huff who now has placed Billy Pauch Jr in the machine at Kutztown

Best wishes go out to all of the Accord Speedway Junior Slingshot and All Star Slingshot drivers who will be taking part in the Slingshot Speedweeks racing at the various speedways on the tour schedule. The racing began this evening at Linda’s Speedway and next Saturday’sracing will be at the Hamlin Speedway with the final leg being hosted at Kutztown.

August 11th is Kenco Outfitters Night at Accord Speedway with all divisions racing long with the Northeast Vintage Modifieds and the first ever Accord Speedway Drivers Reunion with many of the former driving stars from the speedway expected to be on hand. Much thanks to Frank Bush and Jim Douglas for their hard work in putting this event together.

For further updates and information regarding all of the news and additions to the Accord Speedway, log on to their well documented website at: http://www.accordspeedway.com or call the speedway hotline at:845 626 3478.