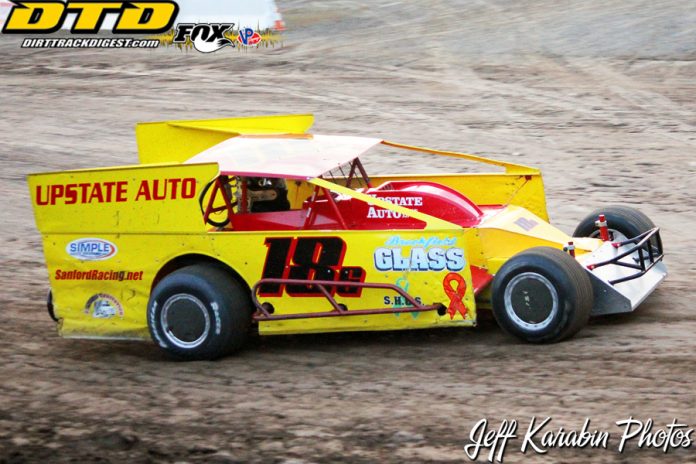 ACCORD, NY – The Accord Speedway has suffered through the 2017 with rainout after rainout and most recently two consecutive postponements. With a mixture of sun and clouds on Friday night and offering a great day in the Catskills, the speedway swung back into racing action on as promoters Gary and Donna Palmer were able to produce a great night of racing at the speedway. The talented roster of drivers were more than anxious to set their wheels in motion on the speedway after two weeks of sitting out race events. Despite the constant interference from the weather, Promoter Gary Palmer had the speedway in great shape and racing trim as the captivating racing action spread across the speedway with at least four distinct racing channels for the drivers to work their magic. The racing action was excellent in the eight divisions offered and he evening of speed was sponsored by the good folks at Tom’s Repair Shop located in New Paltz, New York.

Ed Dachenhausen and Mike Ricci brought the United Pump and Tank Modified field down for the start of the 30-lap headliner. Dachenhausen was a man possessed as he jumped out front and distanced himself quickly from the competition. A couple of skirmishes slowed the pace a bit but Dachenhausen was clicking off steady 13.3 second laps and with each restart left the remainder of the field in his wake. Brad Rothaupt broke into second place early on and took up the chase. When the leaders hit slower traffic, Dachenhausen moved through them faster than Rothaupt and built up a bigger lead and crossed under Rich Roosa’s checkered flag for his first career Modified win at the speedway. Rothaupt was a strong runner-up with Richard Smith continuing to do great work at the speedway with a third place at the end. Rich Ricci Jr was fourth and point leader Danny Tyler rounded out the top five. Mike Ricci steered the second VanDuser racer to sixth place with Scott Ferrier, Danny Creeden, the returning Tommy Johnson and Ken Ferrier completing the top ten.

The Arkel Motors Sportsman headliner found Tony Kowalchuk with the hot foot as he grabbed the lead quickly with Tyler Johnston applying the pressure. Kowalchuk found a home at the top of the speedway and rim-rode his way off the cushion to lead all laps on his way to victory even though Johnston kept the pressure on throughout the event. Johnston would finish second with Rich Ricci III in third, Nick Johnson fourth and the returning Jamie Yannone nailing down fifth place. Robbie Knipe, Cole Hentschel, Greg McCloskey, Matt Shultz and the returning Rafael Carson completed the top ten.


The WRWD Radio Rookie Sportsman feature main event found Vinny Visconti leading the first three laps until a spin slowed the action. On the restart Jeff Higham grabbed the lead and would lead a lap before a strong move by Visconti placed him back at the top of the heap. From then on Visconti found clear sailing throughout the remainder of the race to go on and claim his second feature win of the season at the Accord Speedway. Hunter Lapp continues to impress with a strong runner-up finish while the Jeff Higham was third, John Brown fourth and Ryan McCartney finishing fifth. Jared Miller headed up the second five with Alex VanPelt, Kevin Stevens, Michael Corbin and John DeWitt making up the remainder of the field.

The WRWD Radio NEWS Sprint Car main found Corey Wood getting upside down on the first lap. Wood walked away unhurt but severe damage was done to the race car. On the restart Jeremy Quick hustled to the top reaches of the speedway and grabbed the lead and found it an easy ride from there as he raced to his second win of the season. Larry Ricci finished second with Bobby Tersillo and Andrew Davis completing the field.

The Want Ad Digest Junior Slingshot main event was all Brock Pinkerous as the young speedster fought off early challenges from Jaden Sleight and Jake Mason to cruise to his second win of the season. Jake Mason hustled to a fine runner-up run with newcomer Amber Baccglini third.

The Upstate Auto Pure Stock feature kicked off with Steve Williams getting the drop on the field at the start of the event. Ray Tarantino grabbed up the runner-up slot early on and began to stick the nose of his race car under Williams letting him know he was there. Tarantino made the winning move off of turn two to take command of the lead and would lead the remaining laps to claim his fourth win of the season. Williams would finish second with John Hechinger third while Travis Brockner and Emerson Cargain Jr would complete the top five. Bob Sleight headed up the second five with the returning Jay Smalley, Steven Kanuk, the returning Shawn Maloney and Craig Cuneo finishing out the top ten.

The Empire Lightning Sprint feature found former three time track champion Clint Roehrs in the drivers seat for the first ten laps before another former champion Peter Dance drove his Pat Potter owned hot rod around him on the outside to take command of the lead. Dance would go on to capture the win with the hard charging Rich Wood finishing second. If Wood could have claimed the win there was a bounty waiting for him by he fell one short of the mark. Roehrs was third with Canadian Tony Moreau finishing fourth and Justin Phillips rounding out the top five.

The Emmanuel’s Marketplace 4 Cylinder Enduro event closed out the show with Scott Gumaer leading the first six laps before yielding to the high flying Dave Donovan. Donovan was leading but a trio of racers were chasing him with each passing lap. Lap-29 would find Dan Curry taking over the and quickly stretched it out until lap-33 when he abruptly spun out and was out of the event. Donovan inherited the lead and would lead the remainder of the way to claim his fourth straight at the speedway. Gene Helms was the runner-up and contended throughout the event. Joe Rotella made it to the podium in third place.

Tom’s Repair Shop located in New Paltz, New York was the headline sponsor for the evening and supported the speedway with three cars competing in three divisions at the speedway. “Tommy Gun” Tommy Johnson competes in the Modifieds, Nick Johnson in the Sportsman and Livy Johnson has been a fixture in the Pure Stocks. Many thanks to the Johnson Family for their support of the racing at Accord.

New cars and drivers that arrived for action last night included Austin Helmich and Robbie Colburn in the Rookie Sportsmen. Howard Jarvis, a strong contender for years at Accord, took a ride in the Plumstead owned Sportsman car. Joey Bruning broke in hot laps in the New York Truck Parts entry and Kyle VanDuser was sidelined early on with mechanical problems. The Pure Stock ranks were bolstered by Shawn Maloney and Shawny Hazel. Amber Baccaglini was a new addition to the Junior Slingshot ranks.

Speedway regular Heidi Hedin was missing in action as she took a hard tumble in the catch fence at the New Egypt Speedway last Saturday night. Heidi will return to action at Accord soon. Brian Malcolm had rough night at the speedway as through no fault of his own was involved in two incidents with heavy damage to the County Waste/Stafursky NAPA/Sharkey’s Fuel sponsored hot rod. Eric Jennings also had some problems as his sprinter suffered heavy damage in his heat event, and Larry McVay and Corey Wood encountered problems in the Sprint feature

The Enduro event was exciting The drivers were quick as they raced through the disabled cars and really put on a super show for the fans.

With only a few weeks left in the regular season, it is imperative those seeking a point championship be at their very best in the last remaining events to be able to be in a position to make a run for the title. These are the championship weeks as the racing intensifies and leads to the “Night of Champions” on September 8th, which will be presented by Upstate Auto as a special tribute night for first responders.

Uncle Mike Hansen was back in the booth for the racing action and talked about the upcoming first responders event that is growing in leaps and bounds.

Special thanks to Visconti Racing for the cap donation for the 50/50.

The next event at Accord will be September 1st with all divisions in action. Emmanuel’s Marketplace will headline the sponsorship of the amazing Fireworks extravaganza from Santore’s Famous Fireworks. Additional events will be sponsored by Taylor Rental and the Orange County Fair Speedway. The qualifying event for the Eastern States 200 will be in place for the United Pump & Tank Modified Division.