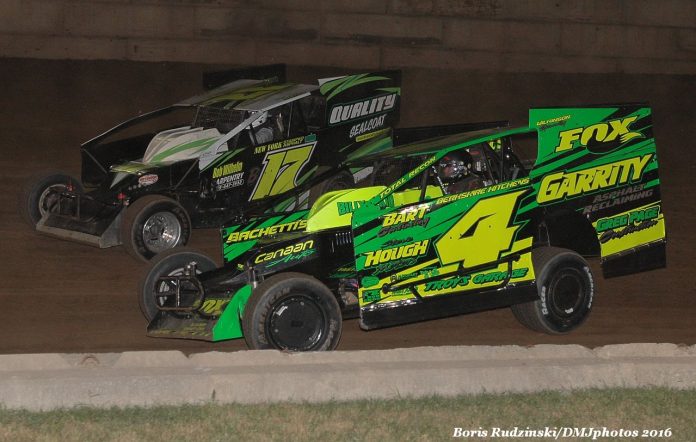 ACCORD, NY – Accord Speedway is coming off a very successful last weekend in which five division champions were named for the 2017 racing season and a spectacular patriotic intermission tribute to 911 absolutely rocked the house. The Accord Speedway management team has the “House in Order” in preparing for the biggest event of the season at the speedway. Promoters Gary and Donna Palmer and staff have burned the midnight oil and have been working non-stop to greet the fans and the participants who will be working their magic on the Accord clay. The highly anticipated evening of racing excitement and the expected huge crowd will have the opportunity to see many of their favorite stars in action on the pristine, semi-banked quarter mile speedplant on September 15th. Gary Palmer will attend to his duties with an all-out effort in giving the combatants a moist and tacky track surface they can race from wall to wall throughout the evening. The action on the speedway will be brisk and it will be thrill a second when the King of the Catskills event is unleashed. Donna Palmer and her staff will work their magic with great attention to detail from ticket sales to the food concessions as the well noted kitchen at Accord has been serving up great cuisine all season long. The weekend of racing excitement is sponsored by Bruce Insinger and his Insinger Fuel and Performance Team.

The evening of speed will bring out the United Pump and Tank sponsored mighty modifieds in a sixty lap excursion as the hometown aces of the Accord Speedway will defend the home turf against the anticipated invaders of the Northeastern Modified world. The evening will bring in the King of the Catskills 60 lap event Modified event that will pay $5,000.00 to the first driver under the checkered flag at the end of 60 laps of the hard driving excitement. “The Chairman of the Board” Rich Ricci Jr captured the 2016 event with a wire to wire triumph to earn his fourth King of the Catskills victory. Ricci took some time off during the 2017 racing season but when the big money is on the line Ricci can always be counted on to be at the finish.

The opposition will be equally as strong as from Sheffield, Massachusetts, “The Wild Child” Andy Bachetti is coming off a superb season in which he captured the 2017 Afton Speedway track championship and will be making a return to the speedway for the event. Bachetti is a two-time track champion at Accord, a past winner of the King of the Catskills and in a couple of appearances at Accord in 2017 came away with a win and a runner-up finish.

“The Marksman” Jesse Marks was sixth in points while “Gentleman” Ed Dachenhausen captured one win and finished seventh in points. “Double J” Joe Judge had a fast hot rod during the last half of the season and vaulted into eighth place in points. “The Legend” Richie Eurich finished ninth in points even though he missed a few weeks and has continuously shown he still has plenty of moxie and talent to win races. Rounding out the top ten in points was the “KF Flier” Kenny Ferrier as even though he suffered through some tough luck during the season he still managed to finish in the top ten.
.
“Iron” Mike Ricci also took some time off in 2017 to assist his Nephew Jimmy Wells. Mike is a master of the short track real estate and will be well prepared for the King of the Catskills headliner, an event he has captured twice in the past.

Brian Krummel captured the opening night victory at Accord and is expected to return for the event. “The Statesman” Jerry Higbie also picked up a win in limited appearances and is a three time champion at Accord and former winner of the KotC event and has signed on for the event and will be steering his own Handsome Devil BBQ sponsored hot rod.. The 2016 Modified Speedway Champion, “The Montgomery Missile” Anthony Perrego picked up a win in limited appearances at Accord this season and will be returning for the event in the Superior Remodeling speed chariot.

The Arkel Motors Sportsman will be in action and pointing towards a $1,500.00 prize as the speedway offers a memorial event to one of the truly good guys in racing, Joe Giachinta. Joe lost his life two years ago in an industrial accident after the season ended but was instrumental in assisting the Accord Speedway with his innovative Redi Rock International concrete blocks that make up the speedway’s retaining barriers from turn three all of the way into turn one. Joe began competing at Accord in 2003 and his missing name on the driving roster is heart breaking to everyone who knew him and cheered for him on the speedway. Joe assisted with the career of “Jumpin” John McGill and followed up by helping Sportsman racer Brandon McGill and Junior Slingshot racer Jake Mason, who earned a championship this year in his division.
.
The new crowned 2017 Sportsman track champion “The Bushkill Bullet” Kyle Rohner will head up a top flight contingent of drivers seeking to pull off the big win. Rohner earned four wins during the season in his Advanced Concrete sponsored racer to earn his third track title at Accord. Plenty of competition will arrive to try to work their magic out on the speedway as runner-up in the points chase Tony Kowalchuk earned two wins during the season and was in contention for the title until the final event. Former National Junior Slingshot Champion, “The Tornado” Tyler Johnston, has been strong all season long and an emerging star at the speedway. “Kid Ice” Cole Hentschel earned a win late in the season and has really stepped up his game and will be a contender on Friday. “The Otisville Outlaw” Corey Cormier captured two wins during the season and a threat to win at any event. Additional drivers looking to climb the pedestal on Friday include Matt Shultz, Jimmy Johnson, Nick Johnson, Nick Plumstead, Brandon McGill, Rich Ricci III, Dave Demorest, Jamie Yannone, Leo Fotopolous, Mike Senecal, Anthony Recchio and the recent return of “The Kingston Cruiser” Greg McCloskey.

The thrill a second Emmanuel’s Marketplace Four Cylinder Enduro gang will also be a part of the race card. One hundred laps of racing on the Accord clay will determine the winner of the $2,000.00 prize offered up by the speedway. There have been five events in 2017 with Johnny Bankich winning the opener and then Dave Donovan captured the next four events. Gene Helms has been a steady runner all season long and just may be the spoiler in the long distance event.