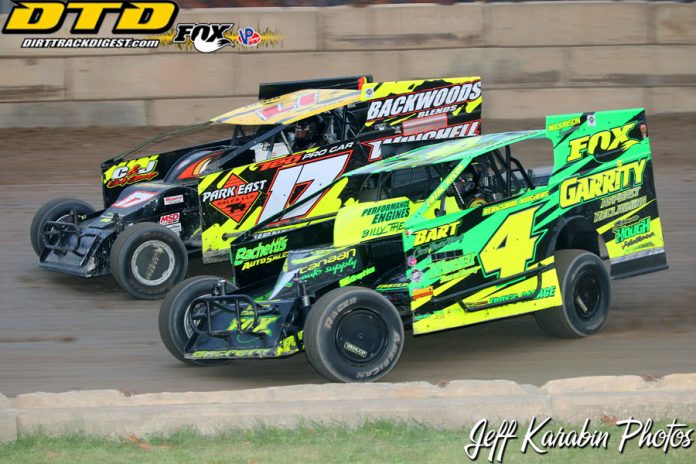 ACCORD, NY – Andy Bachetti outdueled Mike Ricci in a crowd-pleasing, back-and-forth battle to close out the 2017 Northeast outdoor dirt-track season Saturday at Accord Speedway.

Bachetti, of Sheffield, Mass., took over the lead for the final time with 13 circuits remaining in the 50-lap big-block/small-block Modified main and raced to a $5,700 payday for his first-ever ‘Gobbler’ victory in the event’s fifth running. Bachetti received $5,000 from the posted purse, $500 from Upstate Automotive and an additional $200 Halfway Leader bonus from Land Hoe Maintenance LLC.

Run on an unseasonably warm late-November day, the ‘Gobbler’ filled the Accord facility to overflow with jam-packed grandstands and a pit-bulging 177 race cars on hand.

The day’s events were presented by Superior Remodeling and Upstate Automotive.

“What an awesome day,” Bachetti, a two-time Short Track Super Series (STSS) champion, said after climbing from his black and fluorescent green No. 4. “It was hard racing there with Mike (Ricci). He’d get me, I’d get him. It was tough with the restarts and lapped cars thrown in.”


After their on-track combat, Bachetti and Ricci shook hands with huge smiles in Victory Lane.

Bachetti led the ‘Mashed Potato’ Modified field to the green flag, but it was Ricci – a master of the Accord bullring – who was able to wrestle the lead away at the outset. Ricci set the pace, with Bachetti in tow, for the race’s first 12 laps.

Mired in lapped traffic, Bachetti and Ricci slapped rubrails with Bachetti emerging out front for the first time on lap 13.

Ricci never let Bachetti out of his grasp.

On a 26th-lap restart – in a wild exchange – Ricci regained command of the lead. During an ensuing stretch of green-flag racing Ricci put some distance between his No. 17 and Bachetti.

However, a final restart on lap 37 changed the complexion of the race.

With sparks flying on the frontstretch, Bachetti squeezed past Ricci. For the remainder of the race, the two ran nose-to-tail with Ricci working to the inside.

Bachetti held on for the win by less than a car-length.

“I think Mike might have been a little better than us,” Bachetti said. “It was about track position there at the end and that (last) restart worked out in our favor.”

Two-time ‘Gobbler’ winner Anthony Perrego of Montgomery, N.Y., settled for third, lurking just behind the leaders for the entire distance in Brian Smith’s No. 44. Perrego thrilled the crowd earlier in the day coming from the final row of his heat race to pick up the win.

Joe Judge of Highland, N.Y., used the outside lane to climb to fourth late in the going, nosing out Ryan Godown of Ringoes, N.J., in the Lincoln Auto Body No. 5 owned by Dieter Schmidt.

Utilizing the low line to rebound from a mid-race tangle, Mike Gular of Boyertown, Pa., turned his second career Accord start into a sixth-place finish, with Jerry Higbie of Newburgh, N.Y., Tyler Siri of Horseheads, N.Y., 23rd-starter Brian Malcolm of Lake Ariel, Pa., and Jimmy Wells of Rosendale, N.Y., completing the top-10.

Bushkill, Pa.’s Kyle Rohner continued his outstanding season with a $1,150 payday in the ‘Sweet Potato’ Sportsman 25-lap main. Rohner worked the extreme low line on the quarter-mile oval for his winning drive. The ‘Bushkill Bullet’ worked past Kevin Stevens and was never headed.

Rohner received a $150 bonus as the first Crate 602 Sportsman driver across the line.

Corey Cormier sliced through the field late in the going to finish second. Cormier, the ’17 STSS Sportsman title winner, was the second Crate 602 car in the order, receiving $125.

The ‘Whipped Cream’ Wingless Sprint Cars were a first-time attraction on the ‘Gobbler’ docket. Ringoes, N.J.’s Ryan Godown pulled double-duty on the day and drove to a $1,100 payday in the 20-lap event after leading from start-to-finish and winning his heat race earlier in the day.

After pitting to change a flat tire, Greg Sleight marched back through the field to win the 20-lap ‘Pumpkin Pie’ Pure Stock Ron Wright Memorial. Sleight took command late in the rough-and-tumble feature and narrowly held off the advances of Travis Brockner, who like Sleight had to recover from earlier misfortune.

Brandon Conklin received $2,000 for his efforts in the ‘dessert’ of the day: Enduro pudding. Conklin scored ahead of Dave Donovan, early leader Jeff DeGroat, Johnny Bankich and George Zeininger.

GOBBLER LEFTOVERS: Pits were pushed to the point of overflow with 39 Modifieds, 48 Sportsman, 30 Pure Stocks, eight Wingless Sprints and 51 Four Cylinder Enduro cars signing in to compete as the ‘Gobbler’ celebrated its fifth anniversary….

The fifth-place Modified finish for Ryan Godown came with a left-front flat tire for the second half of the feature event….

Mike Gular’s only previous Accord appearance was in the summer of 2013 when the speedway hosted its first ‘Battle of the Bullring’ midweek special….

Santa Claus made an appearance during the program riding on a newly purchased Accord Speedway fire truck….

The day featured non-stop on-track action with little downtime. Only a brief pause was taken prior to the Modified main….