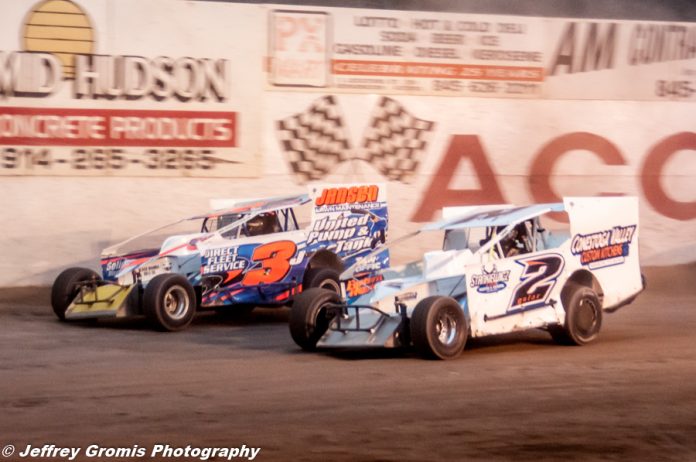 ACCORD, NY – Last week the Accord Speedway hosted what would be their lone test and tune session with close to ninety cars signing in to dial in their racing equipment and prepare for the 2018 racing season. Promoters Gary and Donna Palmer deemed the test and tune to be quite a successful evening and will now focus their attention to opening night at their pristine quarter mile speedway this coming Friday evening, April 20th with seven divisions of racing slated to go to the post. The exciting evening of speed will be sponsored by Fast Signs from Kingston, New York www.fastsigns.com

The crazy weather pattern of late has had the speedway staff logging in some extra long hours in preparation to meet and the greet the drivers, sponsors and fans who will see the first glimpse of the race cars in actual racing competition as the speedway opens it’s gates officially for the first time in 2018, the eighteenth season of ownership and promotional reigns at the speedway for the Palmer Family.

The Accord facility was built back in 1962 in the area that at one time was dubbed the “Borscht Belt” by the many vacationers who traveled into the Catskills Mountains from New York City and New Jersey. Such grand resorts as Grossingers, The Concord, Kutshers and Brown’s Hotel were famous for the great entertainers of the golden era of entertainment such as Milton Berle, Martin and Lewis, Rodney Dangerfield, Henny Youngman and Jayne Mansfield entertained their audiences to always sell-out crowds. With the quick-start of the transportation and hotel industry gaining momentum into the seventies, those famous resorts died off one by one but the Accord Speedway remains a solid focal point for the area for fans seeking to enjoy a weekend of affordable entertainemt and good fun. The 2018 racing season is destined to be another great season at the “Gem in the Catskills” facility.

The Palmer Family is coming off an excellent 2017 racing season despite a ton of rainouts and is looking forward to another successful season at Accord. Seven divisions of racing will greet the fans on Friday evening with the Insinger Fuels sponsored Modifieds, Arkel Motors Sportsman, Upstate Auto Pure Stocks, WRWD Radio Rookie Sportsman and WRWD Northeast Wingless Sprint Cars and the Emmanuel’s Marketplace Fireball and Jr Fireball Four Cylinder divisions. Much interest has centered around the fledgling sprint car series as the division was introduced three seasons ago and has gained considerable attention for drivers who are seeking their entry into open wheel competition but doing so in an affordable manner.


Drivers will utilize the division as a stepping stone into their racing future and one such driver is “The Traveling Man” Mick D’Agostino as the young man from Taunton, Massachusetts comes off a stellar season in which he captured the JPA Masonry sponsored 600 Sprint championship at the Hamlin Speedway. He will deal with “The High Side Hustler” Eric Jennings who reigns as the current champion of the division as well as Doylestown, Pennsylvania hot shoe Heidi Hedin. “White Lightning” Larry McVay from Bordentown, New Jersey, “Captain Quick” Jeremy Quick, Rookie of the year Bobby Tersillo and many more who are joining the open wheel ranks.

The all-important task of manicuring and grooming of the raceway track surface and grounds falls into the very capable hands of Promoter Gary Palmer. Palmer spent a tremendous amount of time over the winter months to improve the facility and basically balance the speedway surface all around to give all of the competitors an equal surface to race on. Fresh paint and newly landscaped parking areas will greet the drivers and fans as they make their way onto the speedway grounds. New lights have been added to the pit area and new lighting in on the list of new things slated for the speedway.

The 2018 Memberships, Parking Permits and Season and Indoor Seating Tickets are available. The culinary talents of the Accord Speedway Chefs will once again be offering some relishing new entrees to the menu as specialty items for the fans as the speedway concession staff offers up an abundant variety of hand-crafted sandwiches and some of the finest race track cuisine in the entire country.

With all of the division champions returning to defend their crowns, the action will be hot and heavy as soon as the first green flag drops.

For further updates and information regarding all of the news and additions to the Accord Speedway, log on to their very well documented website at: http://www.accordspeedway.com or call the speedway hotline at: 845 626 3478. At the Accord Speedway.