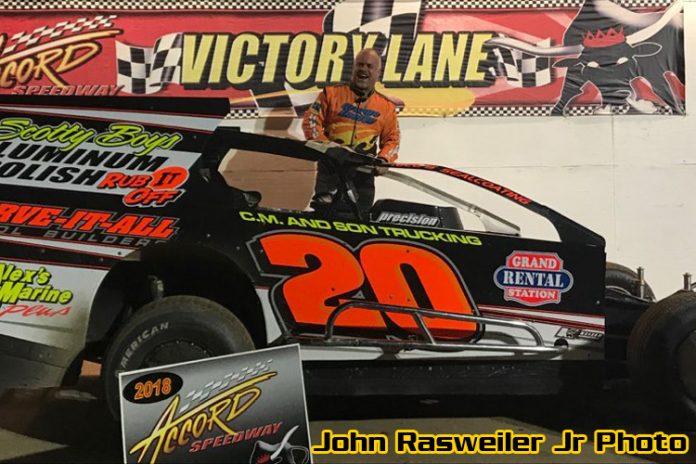 ACCORD, NY – The Catskills Mountains of New York State sprung back to life Friday evening as the the high pitched sounds of race cars and the mighty cheering from a grandstand full of happy fans opened up the Accord Speedway for the 2018 racing season. Promoters Gary and Donna Palmer ushered in the long-awaited season opener at their pristine racing facility located in the area once known as the “Borscht Belt.” The speedway opened last evening to a great cast of familiar and new driving stars and they offered high speed action with daredevil skills on a race track like no other found on the entire East Coast today. The great opening night crowd witnessed six race divisions on a day that found the weather somewhat warm in the afternoon and quickly going frigid as the evening progressed. The racing action was sponsored by Fast Signs of Kingston, New York: www.fastsigns.com

Joey Grammes and Danny Creeden brought the 23-car starting field to the green flag for the start of the 30-lap Modified headliner. Creeden wasted no time in blasting to the front of the pack with Joey Grammes and Scott Ferrier in hot pursuit. A restart found Scott Ferrier blasting off of the top of the raceway like a man possessed as he quickly scampered away from the field. With Ferrier putting on a clinic, the racing action was hot and heavy behind him as the quality field of talent jockeyed for their own slice of real estate. Anthony Perrego moved through the pack in a challenging position only to find his hot rod catch on fire and he quickly shut down the racer.

On the restart, Ferrier once again showed his tail pipes to the rest of the field only to seemingly slow a bit during the final ten laps allowing Creeden, Rich Ricci Jr, Jerry Higbie and Mike Ricci to close the distance but would cross the finish line in that order. Local ace “Little Richard” Smith was sixth from 15th, and the remainder of the top ten included Jimmy Wells, invader Andy Bachetti, reigning champion Danny Tyler and Brian Malcolm.


The Arkel Motors Sportsman feature headliner found a very quick Tony Kowalchuk establishing the point for the first 13-laps. A restart brought the field together and on the restart Kyle Rohner drove by Kowalchuk from the top of the raceway. A lap-20 caution placed Kowalchuk back to the front as officials decided Rohner had jumped the prior start. On the ensuing restart, Rohner went to work and grabbed the lead as the two combatants hit turn three. Rohner led the remainder of the way to grab the win with Kowalchuk in the runner-up role. Leo Fotopolous was third in a great run with Tyler Johnston and Hunter Lapp completing the top five as the pair battled throughout the event. Daniel Morgiewicz headed up the second five with Mike Senecal, Kevin Stevens, Cole Hentschel and Nick Plumstead completing the top ten.

Emerson Cargain Jr led all laps to triumph in the Upstate Auto Pure Stock feature race. While Sleight led all of the laps, Steve Williams kept it interesting throughout the event as he challenged for most of the event along with former track champion Bob Sleight. Williams was the runner-up with Sleight third, Livy Johnson fourth and John Hechinger fifth.

The WRWD Radio NEWS Sprint Cars found Bobby Tersillo leading all of the way to capture the win. Newcomer Mick D’Agostino pushed Tersillo the entire distance but couldn’t find the sweet spot of the raceway to get by.
Keystone State star Heidi Hedin finished third while another newcomer Dan Malley was fourth.

The WRWD Rookie Sportsman field was a good one and even though the attrition rate was a bit high at the opening night event, there is a good deal of talented future stars within the group. The night belonged Kenny Ryder as he led all laps to capture his first ever win at Accord. Travis Green was in for the runner-up slot while Samantha Muller was third in her debut into the full size car ranks. John Brown and Fred Smith completed the top five. Erin Paulison, Michael Corbin, Joseph Coppola, Cole Stangle and Brian Durbin completed the top ten.

The start of the event was delayed for a few minutes to allow the crowd a chance to find their way to their seats in a solid opening night event for the speedway and the Palmer Family. The Palmer Family is celebrating their eighteenth anniversary as the owners and promoters of the Accord facility.

The Accord concession stands were at full tilt as the hardworking staff busted their humps to cover the hungry racing crowd that came out to support the speedway.

The speedway itself was in spectacular condition as Promoter Gary Palmer spent the entire week in working his magic on the multi-channeled raceway that saw three and four wide action throughout the evening of events. All of the drivers offered their praises for the well groomed facility.

Many new cars and paint schemes were the order of the day for the pit area that bustled all evening long. “Jammin” Jimmy Wells opened his season sporting new sponsorship from Upstate Auto and celebrating a birthday. Joey Grammes, Butch Getz and Tyler Boniface were new additions to the Modified field. D’Agostino, Dan Malley, Jordan Lawrence and Mark Connoly were new faces for the sprint division.

The new Town Supervisor in Rochester Mike Baden was on hand for the action, interviewed with Steve Pados and truly enjoyed his night at the speedway. Uncle Mike Hansen from WRWD Radio was on hand and had the decked out WRWD Truck taking a few laps. The Upstate Auto pace truck had Randy Filipowski at the controls

Ronda and Gary Phillips, who play such an important part in the success of the Dirt Track Heroes Show, came up from Phillipsburg, New Jersey to cheer on their favorite driver Kyle Rohner.

April 27th has all regular divisions at the speedway in action. Mombaccus Excavating and Stone is the headline sponsor for the evening of speed.