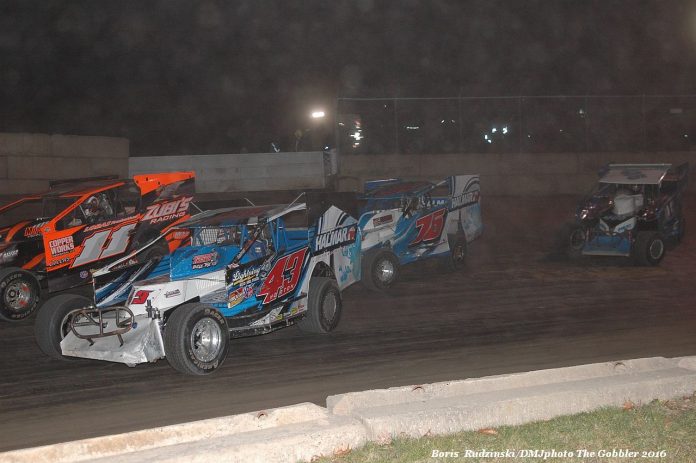 ACCORD, NY – Accord Speedway Promoters Gary and Donna Palmer have been stymied the past two weeks with rain-outs at their speedway but will be hoping to right the ship on Friday Night, August 10th when Kenco Outfitters hosts the speedway racing card and the second annual Accord Speedway Racers Reunion takes place on the speedway grounds. Last year the attendance was overwhelming as the many stars from the past glories at the speedway came out in full support of such a memorable event. Even though the racing had to be cancelled due to the heavy rainfall, the drivers, the fans and announcers Tim Adams and Steve Pados carried out their mission and between 30 and 40 interviews took place. The Palmer Family will be hoping for some relief from Mother Nature as they prepare for this years edition of the event as the reunion organizers Frank Bush and Jim Douglas have worked overtime and then double-time to produce an even greater reunion this time around. Kenco Outfitters is the headline sponsor for the event as they “Outfit Your Life” in taking care of just about any application possible in the way of camping, hiking, fishing, boating and clothing needs. Their website is: www.atkenco.com.

Seven divisions of racing will go to the post on Friday night with the six regular divisions of racing and the Northeast Vintage Modifieds have been added for their fourth appearance of the season. The racing at the speedway has been excellent all season long with some new additions to the rosters increasing the top level of competition at Accord. Nine different winner have graced the WRWD Radio Victory Lane thus far in the Insinger Fuel Modifieds with “Jammin” Jimmy Wells leading the way with three wins. “The Wild Child” Andy Bachetti is the only other driver with multiple wins and he gas scored two wins thus far. Seven different winners have found pay-dirt in the Arkel Motors Sportsman with “The Bushkill Bullet” Kyle Rohner leading the way with five wins. “The Jersey Force” Anthony Recchio has found his way to victory lane twice. Five different winners are in the Upstate Auto Pure Stock division with Emerson Cargain Jr leading the way with five wins. “The Travelin Man” Mick D’Agostino has scored six wins thus far in the WRWD Sprint ranks with Bob Tersillo and Jeremy Quick each scoring three wins. Charles Loiodice and Cole Stangle have each scored thee wins in the WRWD Rookie Sportsman while five additional drivers have gone to victory lane. Five drivers have been credited with wins in the Emmanuel’s Marketplace Fireball Four Cylinder division with Jerry Kingeter leading the way with four wins thus far.

Some of the interviews done last season included such Accord greats as Ray Anderson, Russ Meyer, Jimmy Banks, Donnie Beesmer, Steve Conklin, Barry Davis, Bert Irwin Jr, Hank Goranson, Wayne Gundburg, Howard Osterhout, Elwood Hewitt, Tom Matthews, Bruce Carman, Bill Judge, Doug Tyler Sr and Jr, Brian Lynch, John Markle, Rich Ricci Sr and John VanLeuven. With many of those drivers attending and many more to come out this year, this edition of the event will long be remembered by those who still bask in the glory of the “Golden Era of Racing.”

August 17th is Escape RV Night at Accord Speedway with all divisions racing and highlighted by the Emmanuel’s Marketplace sponsored Four Cylinder Enduro race. A strong series of events heading down the final stretch of the season will find exciting racing for all fans to enjoy with many special attractions to complete your evening out to the races.