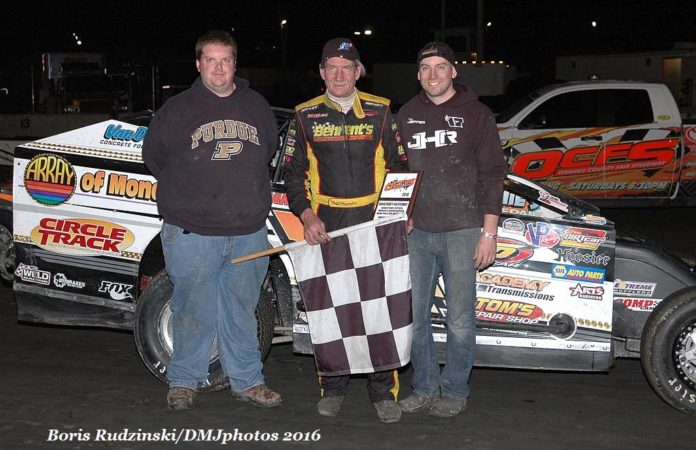 ACCORD, NY – Accord Speedway Promoters Gary and Donna Palmer continue to have a constant disagreement with Mother Nature on the days it is acceptable to rain and to be honest Mother Nature is missing the memos. Last Friday evening the speedway was all set to go with a seven division show plus the second annual Accord Speedway Reunion honoring the legends of the speedway who helped carve out the rich tradition of competing at Accord. Yes, Mother Nature stepped in and doused the speedway grounds with more of the rain that forced the cancellation of the racing activity at the speedway. However, the reunion did take place among the raindrops and for the nice crowd of loyal fans that stayed for the show were treated to a great gathering of the Accord Speedway legends.

Even though the racing had to be cancelled due to the rainfall, the drivers, the fans and announcers Tim Adams and Steve Pados carried out their mission and between 50 and 60 interviews took place. The reunion organizers Frank Bush and Jim Douglas worked overtime to produce an even greater reunion this time around. Stories from the past glories of the speedway were abundant throughout the two hour show and it was a joyous occasion as the drivers swapped stories back and forth about wins, track incidents, the beginning of the racing at Accord and some good old bs stories that had the fans wanting more with each interview.

Plans are already being formulated for 2019 and the only thing that is hoped will not show up is the forces of Mother Nature. Kenco Outfitters was the headline sponsor the track event and for the second straight year their parade was rained on as well. Please check out their website at: www.atkenco.com for all of your outfitting needs. Assisting the organizers for the event included, Woodstock Harley Davidson, Gene’s Tire Service, Al’s Garage, Denise Markle at Healthcare Relationship Solutions, Beesmer’s Home Furnishings, Jim Glass Corvewtte, TTI Luxury Motorcoach Transportation, Jim’s Auto Body, the Markle Family and the Larry Ricci Family.


Seven divisions of racing will go to the post on Friday night with the six regular divisions of racing and the Emmanuel’s Marketplace Four Cylinder Enduros also added. The racing at the speedway has been excellent all season long with some new additions to the rosters increasing the top level of competition at Accord. Nine different winners have graced the WRWD Radio Victory Lane thus far in the Insinger Fuel Modifieds with “Jammin” Jimmy Wells leading the way with three wins. “The Wild Child” Andy Bachetti is the only other driver with multiple wins and he has scored two wins thus far. Seven different winners have found pay-dirt in the Arkel Motors Sportsman with “The Bushkill Bullet” Kyle Rohner leading the way with five wins. “The Jersey Force” Anthony Recchio has found his way to victory lane twice. Five different winners are in the Upstate Auto Pure Stock division with Emerson Cargain Jr leading the way with five wins. “The Travelin Man” Mick D’Agostino has scored six wins thus far in the WRWD Sprint ranks with Bob Tersillo and Jeremy Quick each scoring three wins. Charles Loiodice and Cole Stangle have each scored thee wins in the WRWD Rookie Sportsman while five additional drivers have found their way to victory lane. Five drivers have been credited with wins in the Emmanuel’s Marketplace Fireball Four Cylinder division with Jerry Kingeter leading the way with four wins thus far.

August 17th is Escape RV at Accord Speedway with all divisions racing and highlighted by the Emmanuel’s Marketplace sponsored Four Cylinder Enduro race. A strong series of events heading down the final stretch of the season will find exciting racing for all fans to enjoy with many special attractions to complete your evening out to the races. The run to the championship will also be the focus down the stretch of the season with many of points chases heading down to the wire.