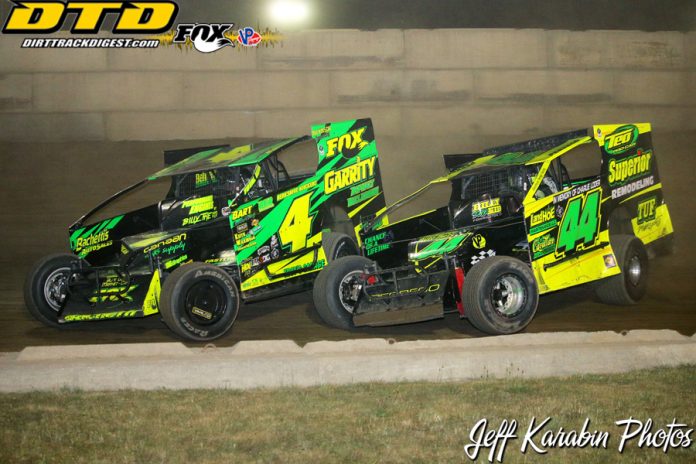 ACCORD, NY – Accord Speedway Promoters Gary and Donna Palmer completed their thirteenth Friday night show of the season last evening after being bombarded with four consecutive rainouts. Mother Nature has been extremely unkind for the past two months to speedway promoters and the overall population in the tri-state area. The crazy weather weather pattern in the Northeast in 2018 has proved to be a nightmare for speedways, amusement parks and resort areas with flooding, storm damage, closed roadways and to the farmers and their crops. Undaunted, the Palmer Family carried on and an exciting seven division show Friday night brought out the largest crowd of the season to not only enjoy the thrill of witnessing the hot racing action but to also see the mighty stars at Accord with the annual Camera and Autograph night.  The event was a resounding success as a large crowd went track side to be among their racing idols. For the great roster of drivers who compete at Accord the joy of making the special trip to the WRWD Radio Victory Lane is a highlight for each driver who has done his or her homework to enjoy the sweet celebration that follows. The weather fully cooperated and the enthusiastic crowd came out to the speedway to enjoy a superb evening of speed. The evening was sponsored by the good folks at Shackelton Auto and Mid Hudson Concrete. Their websites are as follows: www.shackeltonauto.com and www.midhudsonconcrete.com

When the final tallies were recorded, “The Montgomery Missile” Anthony Perrego had the hot ticket and went on to capture his second win of the season at Accord in the Insinger Fuel Modifieds.  “The Bushkill Bullet” Kyle Rohner hung tough all night long and struck late with a hard charge towards the end to capture the Arkel Motors Sportsman “Joe Giachinta Memorial” main event for his sixth win of the season.  Steve Williams was on point and scored his third win of the season in the Upstate Auto Pure Stock feature attraction. “The Captain” Jeremy Quick had a super fast hot rod as he overcame huge early lead by Mick D’Agostino to score his fourth win of the season in the WRWD Radio NEWS Sprint Car feature.  Robbie Colbyrn’s misfortune turned into a windfall for Michael Corbin as Colbyrn’s car failed him on on a restart and Corbin raced to his second win of the season in the WRWD Radio Rookie Sportsman feature. The Emmanuel’s Marketplace Fireball 4-Cylinder feature was captured by Richard Smith as he scored his fourth win of the season.  Smith came back for the Enduro event and captured the win in a race shortened by a gas spill after 22-laps were recorded in the books.

Mark Pullen and Nick Johnston brought the field down for the start of the thirty lap Insinger Fuels 30-lap headliner for the Modifieds.  Pullen led the first two laps and then spun on lap three triggering a massive front stretch pile-up that eliminated a few cars from the event. On the restart Joe Judge flexed his right foot and grabbed up the lead with immediate pressure coming from Anthony Perrego, Danny Tyler and Andy Bachetti.  Judge would lead until lap twelve when Perrego pulled a slider and took over control of the event. Perrego would lead but now would receive heavy pressure from Judge and Andy Bachetti. Bachetti would slip past Judge and chase Perrego but a collapsed front end put him into the concrete on lap-29. Perrego would prevail for his second win of the season. Joe Judge, who admitted had been struggling with set-ups during the season, found the correct dial as he stayed in the hunt for a runner-up finish, his best finish of the season. Danny Creeden rallied to claim third place while Mike Ricci and Rich Ricci Jr completed the top five. Allison Ricci headed up the second five with a great run after starting in 20th position. Jesse Marks, Rich Ricci III, Rich Eurich and newcomer Rich Coons completed the top ten.

The Arkel Motors Sportsman event pole sitter RJ Smith sprinting into the lead at the drop of the green flag as he out raced Daniel Morgiewicz for the early lead. Smith threatened to runaway and hide early on but a caution for the slowing Tyler Johnston brought out the caution. On the restart, Smith would lead but Kyle Rohner was on the march and began to size up the landscape as he pulled into the runner-up slot. Rohner tried the lowside at different ends of the speedway but Smith held tough and continued to lead. Rohner made the winning move on lap-22 as he got a great run off of the backstretch to push the nose of his race car into the lead. Once in front Rohner sped to the checkered flag and earned a $1,000.00 prize for his efforts. Smith was a strong runner-up with Cole Hentschel finishing third making it a 1-2-3 sweep for the Smith Team. Charlie Loiodice was fourth in a great run and his best finish since transitioning over from the Rookie ranks. Matt Shultz completed the top five after starting from twelfth position. Daniel Morgiewicz headed up the second five with Alex VanPelt, Leo Fotopoulos, Anthony Recchio and Chris VanDuser completing the top ten.


Robbie Colbyrn would lead from the first lap in the WRWD Rookie Sportsman headliner. Michael Corbin and Travis Green kept the pressure on but Colbyrn began stretching the lead until newcomer Zackery Murray spun in turn two. On the restart Colbyrn’s car would not respond and Michael Corbin jumped into the lead. Travis Green came up quickly to challenge and the pair waged a war until the checkered flag with Corbin scoring the win with Green in second. John Brown raced to third with Brian Durbin fourth and Travis Cogswell finishing fifth. Zackery Murray and Erin Paulison completed the field.

In the Upstate Auto Pure Stock event, Steve Williams was textbook all of the way as he wired the field on his way to his third win of the season. Bob Sleight would score runner-up honors and Travis Brockner, John Hechinger and the returning Kevin Skelly completing the top five. Jay Samlley, Emerson Cargain, Rich Scott and Ray Tarantino completed the field.

A green flag scramble at the start allowed Mick D’Agostino to bust out to a huge lead early in the encounter. Jeremy Quick would go to work and would begin to shrink the margin. Quick hustled and closed in when D’Agostino got into slower traffic and Quick would take over the point on lap twelve. Once in front, Quick stepped away from the field to go and capture his fourth win of the season.  D’Agostino was second with Andrew Davis, Jordan Lawrence, Gary Huston, Mike Traver, Mark Connolly and Kyle Pugliese completing the field.

In the Fireballers feature, Nicole Nelson grabbed the lead at the start and would lead the first four laps before Richard Smith found room at the top to slip past her.  Once in front the show belonged to Smith as he led the rest of the way in the lap shortened event for his fourth win of the season. Brandon Conklin was the runner-up in a strong run while Jeff Degroat was third, Nicole Nelson fourth and Jerry Kingeter rounding out the top five in the 22-car field.  Ed King headed up the second five with Jesse Torrens, Ryan Heady, Robert Phillips and Ken Barringer completing the top ten.

In the Enduro finale, Dave Donovan led the first lap before limping into the infield. Brandon Conklin took over the lead and would lead until lap number eleven when Richard Smith slipped past for the lead. Smith would carve out a big lead and would be declared the winner when one of the competitors encountered a leaky gas tank necessitating a long clean-up. Jeff Degroat was second with Matt Guadagno, Dave Bendell and Cody Helms completing the top five.

The track was in impeccable condition from top to bottom as Promoter Gary Palmer had a perfectly manicured speedway. Many favorable comments came from the drivers during the interview sessions at trackside during the camera and autograph time allotment.

The Camera and Autograph sessions are always a big hit for the fans at the speedway. Many of the drivers offered up profile cards and candy to their fans in a span of about 45 minutes.

Grandma Anne’s Pies were distributed to the feature winners while two additional pies were handed out during the 50/50 raffle.