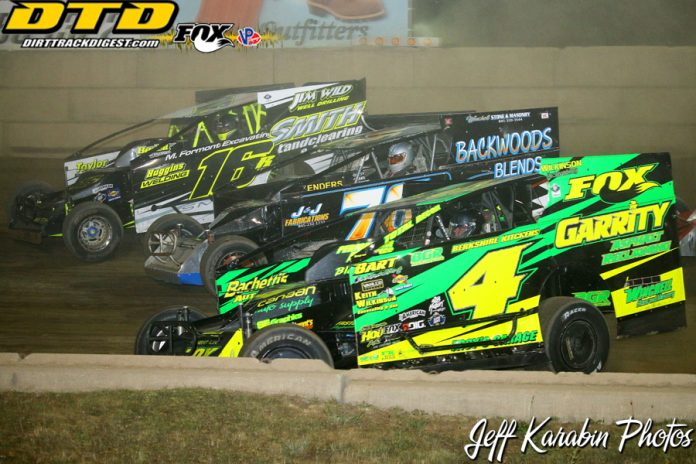 ACCORD, NY – Accord Speedway Promoters Gary and Donna Palmer ushered in the start of Labor Day weekend on Friday evening and completed their fourteenth show of the season with a great seven division show and the special eliminator event for Sportsman racers sponsored by Race Director Dave Rocket and racer Jamie Yannone from Yannone Enterprises. While Mister Sun stayed away and a cloud cover remained over the speedway, the great crowd on hand enjoyed an excellent night of racing. The evening of speed was sponsored by long-time speedway supporters Tom’s Repair Shop located in New Paltz, New York.

Ed Burgess and Nick Johnson brought the field down for the start of the thirty lap Insinger Fuels 30-lap headliner for the Modifieds.  Burgess would lead for a lap and he would fall to the high flying Andy Bachetti as Bachetti took control of the event early on. A massive four car pile-up on the homestretch brought a halt to the action as the crash eliminated a three cars from the event. On the restart it was all Bachetti as a couple of laps later would find him riding the crest with a six car length lead. Danny Tyler broke free and began to drive away from the field with Rich Ricci Jr in a solid third. As the laps clicked off Bachetti remained in command and things behind him began to take on a new look as Anthony Perrego, riding a hot streak of late, found the line he was seeking and began to pick off cars in his march to the front.  Perrego would race to third place late in the event but this night belonged to Bachetti as he dominated the action and scored his third win of the season at Accord. Danny Tyler was steady throughout the event and would settle for runner-up honors while Perrego was third. Rich Ricci Jr was fourth and the birthday boy Jimmy Wells would complete the top five. Mike Ricci would head up the second five with Danny Creeden seventh, Steve Davis raced back through the field to garner eighth place, Kyle VanDuser was ninth and Jesse Marks completed the top ten.

The Arkel Motors Sportsman event pole sitter Nick Plumstead jumped out into the lead in a new ride. Plumstead would lead until lap eight when Tyler Johnston, running third, would find a sweet spot between turns one and two to drive underneath Plumstead and second place man Charles Loiodice to take command of the lead. Once in front Johnston slipped away from the field while Cole Hentschel broke away and would race in second place.  Two cars began to make their way forward through the very tough field as Kyle Rohner from eleventh and newcomer Alex Yankowski from fifteenth were taking no prisoners on their way forward. Tyler Johnston owned the event on this night as he sped to his first win of the season. Hentschel was the runner-up with Rohner in third place, Yankowski was fourth and Charles Loiodice, who continues to impress, was fifth. The second five found Nick Plumstead, RJ Smith, the returning Corey Cormier, Mike Senecal and Matt Shultz completing the top ten.


John Brown would lead from the first lap in the WRWD Rookie Sportsman headliner. Robbie Colburn and Travis Green kept the pressure on and Green would slip past Colburn and begin to reel in Brown.  With five laps remaining Green had closed the gap to where the drivers were nose to tail. With two laps to go Green made a bid that fell short but after the white flag fell the pair raced into turn one when Brown slid high and Green dove to the bottom to stick the nose of his racer into the lead when Brown came off of the turn and connected with Green. Heads up by driving by both drivers allowed them to regain control of their cars and Green would race to the checkered flag for the win. Colburn slipped past Brown to gather in second place while Brown settled for third. Brian Durbin, Kyle Swart Erin Paulison and newcomer Dan Knoth would complete the field.

In the Upstate Auto Pure Stock event, Emerson Cargain would lead the initial lap before Bob Sleight took over the point. Steve Williams quickly made his bid for the lead and he and Sleight would race together for a couple of laps before Sleight gained the advantage. Sleight would race away to a six car advantage that remained throughout the remainder of the event. Sleight would score win number two for the season while Williams would settle for second. Cargain was third while Jay Smalley had a stout run in fourth and Steve Kanuk was fifth. Live Johnson headed up the second five with Travis Brockner, Rich Scott, the returning Mike DuBois Jr, newcomer Codi Clark, Tim Southard and John Hechinger.

Dan Malley would lead the first three laps of the Sprint feature event. Jeremy Quick would go to work and would begin to close in on Malley and would hustle into the lead on lap four. Quick had a fast hot rod and would distance himself from the field. A late scramble would bring the field together. Quick just had too much for the field and would score his fifth win of the season. D’Agostino secured runner-up honors and Jordan Lawrence, Mike Traver, Dan Malley, Mark Connoly and Andrew Davis would complete the field.

In the Fireballers feature, Brandon Conklin grabbed the lead at the start and would lead through the first three laps before yielding to Willie DeGraw. DeGraw did just enough to keep his racer in front while fending off challenges from Conklin, Jerry Kingeter and Richard Smith. Some slugging and slamming took place in the late stages that found DeGraw racing to his first ever win at Accord. Point leader Jerry Kingeter was second with Brandon Conklin third, Bill Rion fourth and Dave Bendell completing the top five.

The Northeast Vintage Modified event found Jimmy Halpin with a fast Dodge Coupe as he raced to the lead for the first five laps. Darryl Hulbert would do a slide job to take command of the event on lap six and a few laps later Mike Houghtaling slid into the rear of the Halpin machine and the action caught Ray See Sr with heavy front end damage. Houghtaling was disqualified from the event. On the restart, Hulbert had the speed and style to go on a capture his first ever win at Accord. Charlie Houghtaling was second with Bob Schmidt third, Bill Judge fourth and Jimmy Halpin recovering to claim fifth. Bill Leise headed up the second five with Doug Atkins, Mike Cole and John Atkins following.

The track was in impeccable condition from top to bottom as Promoter Gary Palmer had a perfectly manicured speedway. Andy Bachetti had the fast time of the night in the Modifieds with a 13.5 second time with Rich Ricci Jr turning in second fat time with a 13.724 time..

A big thank you goes out to Tom’s Repair Shop located in New Paltz, New York for their long commitment to the speedway and their three drivers Tommy, Nick and Livy Johnson.

New faces found Ray See Jr and Steve Davis returning to competition. Davis had an early skirmish that sent him to the back of the field but he ran steady and smooth and wound up with an eighth place run. “The Gunslinger” Jesse Leiby found his way to Accord and was 14th in his initial outing. Leiby is a former four time champion at the speedway in the Slingshot divisions. Barry White made the long haul from Berks County to put in his first race at Accord in some time. John Lutes Jr also joined the field but was unfortunately caught up in the front stretch melee.

In the Sportsman, Alex Yankowski joined the field. The young charger will be crowned the Five Mile Point Sportsman champion and another title is looming at the Big Diamond Speedway. Alex is another of the fine driving talents that cut his teeth in the Slingshot divisions of racing. Mike Bull, Jimmy Leiby and Ryan McCartney also returned to the speedway. Dan Knoth, a former Pure Stock racer, raced with the rookies for the first time. Mike DuBois Jr, Codi Clark and Tim Southard also made appearances at Accord in the Pure Stock division.

Bob Harless escaped injury when his vintage coupe climbed the inside barrier on the homestretch.

The Speedway announced throughout the evening the New York State Auto Racing Network Statement regarding Alcoholism and Substance Abuse Services. In New York, there are over 900 certified treatment and support program to assist anyone who has an ongoing problem with alcohol or substance abuse. To learn more about it. contact: 1-877-8HOPENY or visit their website at: www.combataddiction.ny.gov