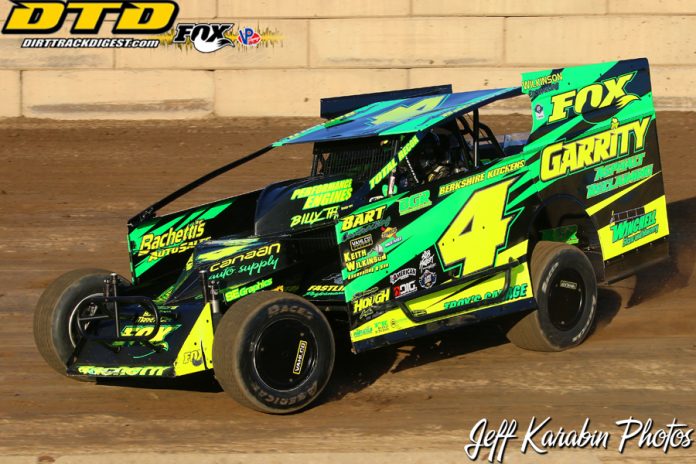 ACCORD, NY – The Catskills Mountains of New York State provided the backdrop for a spectacular Friday evening as the Accord Speedway presented the annual First Responders tribute for the greater Hudson Valley area. The over the top event was sponsored by the good folks from  Upstate Auto (www.upstateautoinc.com) and Ulster Firearms and featured a sensational tribute to all First Responders. The event portion for the First Responders was headed up by Jim Slinsky and the Ulster County Sheriff’s Office K9 Team. An over the top presentation featuring music, bag pipes, 21 gun salute, narration with video, echoing bugles and a tremendous number of fire trucks and emergency equipment filled the speedway. The show was brought to a climactic close with an another fireworks/skyworks extravaganza from Santore’s Famous Fireworks. DJ Tim Adams provided the music during the celebration.

While the evening had a bit of everything going on, the racing action at track-side was once again superb from all angles. Picking up wins were “The Wild Child” Andy Bachetti as he sailed to victory in the Insinger Fuels Modifieds with a dominating wire to wire triumph to pick up his fourth win of the season at Accord. In the Arkel Motors Sportsman division, Kevin Stevens flexed his muscles as he steered his Frank Stevens Roofing sponsored hot rod to his first ever win at Accord. Not to be outdone, Dan Malley hustled his Malley Pool Water entry to the front and led all of the way to capture his first ever Accord win in the WRWD NEWS Sprint Car division. Showing that his trusty Camaro still had what it takes, Bob Sleight grabbed the lead at the halfway point and raced to his third win of the season in the Upstate Auto Pure Stock division feature.

Nick Johnson and Kyle VanDuser brought the Modifieds down for the start of the thirty lap feature attraction and the event began on an even keel as the field raced through turns one and two. Bachetti, who started from fourth slid to the inside heading down the backstretch and passed by both Johnson and VanDuser to take control of the event. Once in front, Bachetti ate up real estate and built up a huge lead that would evaporate on lap thirteen when Ed Burgess came to a halt in turn two. On the restart Bachetti powered away but by this time Tyler Boniface and Danny Creeden were having a dogfight for the runner-up role. Boniface, who had only competed in a handful events at Accord in 2018, proved he had himself a stout piece of equipment to battle with Creeden and the pair put on some excellent racing for the fans. Joe Judge encountered problems on lap-25 and the field went to caution for the final time. On the restart, Bachetti again controlled the point and would go on to record his foruth win of the season at Accord. Creeden was second with Boniface third, Anthony Perrego drove to fourth place and Nick Johnson was fifth in a stellar run for the rookie Modified talent. Heading up the second five was Rich Ricci Jr with Jimmy Wells, Danny Tyler, Jesse Marks and Ray See Jr completing the top ten finishers.

In the Arkel Motors Sportsman battle, Harry Baldwin would lead the first two laps until he spun in front of the storming traffic in turn four. On the restart, Kevin Stevens lined up from the outside and grabbed the lead out of turn four. Stevens was consistent with some 13.9 second lap times and would have a good lead until lap nine when Nick Plumstead suffered mechanical problems in his borrowed ride. On the restart, Stevens again showed he had the power but Tyler Johnston came quickly onto the scene after he slipped past hard running Danny Morgiewicz. Another restart was needed on lap-17 when Anthony Recchio spun and on the restart Stevens and Johnston were nose to tail and would remain that way with the checkered flag falling on lap twenty with Stevens winning his first feature at Accord and Johnston finishing second. Morgiewicz was third with Leo Fotopoulos and Cole Hentschel completing the top five. The second five found Charles Loiodice, Alex VanPelt, Travis Green, in his first run in Sportsman, Ryan McCartney and Kyle Rohner completing the top ten.

The WRWD Radio Rookie Sportsman feature found Brian Durbin with a fast hot rod as he led all of the way to claim his second win of the season. Robbie Colburn gave Durbin plenty of chase to finish as the runner-up while John Brown would be third, Jason Armstrong Fourth and Kyle Swart fifth.

Dan Malley was all business as he took the lead at the drop of the green flag and would lead the first two laps until newcomer Kyle Pugliese got upside down and back on his wheels in turn two. On the restart, Malley would race away to a huge advantage and now had Andrew Davis and Jeremy Quick staying with him. Davis and Quick would race nose to tail as they closed in on Malley. The battle ended with Malley crossing the line to capture his first win at Accord, while Davis would jump the cushion and the move allowed Quick to slide into second with Davis recovering and finishing third. Mick D’Agostino, Mike Traver, Jordan Lawrence, Mark Connolly and Gary Huston completed the field of sprinters.

The close competition of the Upstate Auto Pure Stock division makes for great racing action and the night would prove to be no exception. John Hechinger took the lead at the start and would lead through four laps until a faulty tires put him on the sidelines. The reigning track champion Travis Brockner would inherit the lead and the wind as he would lead through lap seven. Bob Sleight found the inside of the speedway to his liking and was able to pull even with Brockner and slip past him to gain control of the point.  Once in front, Sleight would lead while behind a four car battle was going on and would remain that way until the checkered flag fell ending the event with Sleight winning his third feature of the season.  Brockner would finish second with Livy Johnson, Emerson Cargain Jr and Steve Williams completing the top five. Following would be Johnny Miracle, Tom Cilurso Jr, Rich Scott, Chris Kanuk and Tim Southard to complete the top ten.

The Emmanuel’s Marketplace Fireball feature was postponed until next week.

Despite the fact it rained until noon, Promoter Gary Palmer worked right up until race time to give the racers an excellent speedway top to bottom and it showed with many three and four wide racing taking place throughout the evening. After the all of the First REsponders equipment left the speedway, Palmer gave the track the once over and all of the features were fabulous.  Andy Bachetti had the fast time of the evening with some quick 13.4 second lap times while more than a half dozen drivers were clocking in the 13.6 to 13.9 range.

The talented roster of drivers tested the many racing channels of the speedway throughout the evening in preparation for the blockbuster “King of the Catskills” spectacular coming up on September 29th and sponsored by Insinger Fuels.

The speedway took an extended intermission period to pay tribute to all of the First Responders who work so diligently to keep our home security safe. Headed up by Jim Slinsky and the Ulster County Sheriff’s Office K9 Team, many pieces of equipment came out onto the speedway in darkness and hoisted a 70 foot US Flag through the use of ladder trucks and at the designated moment all lights came on and put up an amazing display that covered the speedway and the entire infield area. Many thanks are in order to all of those who played a part in putting the spectacular event together. Santore’s Famous Fireworks once again lit up the sky with their over the top fireworks extravaganza. DVD Copies of the entire salute to the First Responders are available through Videographer Tom Czaban and can be ordered  by phone at: 518-250-0001. Taking part in the ceremony were: Accord, Ellenville, Tillson, Sawkill, Hurley, Kerhonkson, Rosendale, Stone Ridge, Craigsmoor, Napanoch and Saxton Fire Departments, Ulster County Fire Coordinator, Kerhonkson-Accord First Aid, Ellenville Rescue Squad, Esopus EMS, Kingston Nissan and Ulster County Sheriff’s Office.

“Uncle Mike” Hansen from WRWD Radio was back on board last evening with the WRWD Radio show truck and once again joined announcers Steve Pados and Tim Adams in the tower. Mike thanked promoters Gary and Donna Palmer for their hospitality as he thoroughly enjoyed the great racing action taking place on the speedway and the great spirit of the First Responders presentation..

Happy birthday wishes go out to Hailey Markle and Randy Anderson. The newly married Mr and Mrs Roger Lebron spent part of their honeymoon at the Accord Speedway. Congratulations folks!

Grandma Anne’s Pies were distributed to all feature winners

Special Thanks go out to Clayton McCartney and Benny Campbell for assisting the speedway when a meter box blew out and rendering a portion of the speedway semi-dark. Thanks guys for being there for us.

Next Friday, September 14th brings the fine folks from the Orange County Fair Speedway and Taylor Rental to the Accord Speedway with all divisions in action. The event will serve at the “Night of Champions” as all of the division champions will be named and interviewed in the WRWD Radio Victory Lane after the events are completed. The night will also serve as the Big Block Qualifier for the the annual Eastern States Weekend to be held at Orange County in October.