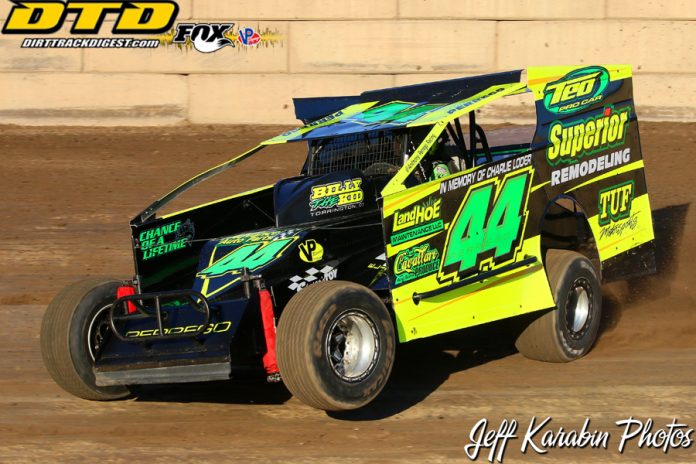 ACCORD, NY – The final days of the summer acts as the informant to alert fans the 2018 racing season is heading into the final stages of the season.  Accord Speedway’s final regular season points battles came to a conclusion on Friday evening as damp but muggy weather arrived to the Catskill Mountains of New York state. The Friday evening of events brought out a nice sized crowd to the speedway as the Accord Speedway presented it’s “Night of Champions” to the “Gem in the Catskills” facility.  All track champions were crowned in the final evening of points at the speedway for the 2018 racing season. The over the top event was sponsored by Orange County Fair Speedway and Taylor Rental. Their websites are: www.orangecountyfairspeedway.net and www.taylorrental.com

With some of the divisions at the speedway beyond tight in the point chases, all drivers with aspirations for a track title had to be at their very best to land in the WRWD Radio victory lane when the racing was completed. Heading up the list of 2018 track champions is “The Montgomery Missile” Anthony Perrego who enjoyed a great 2018 season and finished strongly to capture the Insinger Fuels Modified division title and in doing so captured his second Modified title at the track as he also was champion in 2016.  “The Bushkill Bullet” Kyle Rohner was dominant all season and captured six wins during the season on his way to his fourth Accord Speedway title in the Arkel Motors Sportsmen division. “The Traveling Man” Mick D’Agostino spent the first few weeks learning a new division but quickly learned the short way around Accord as he scored six wins and remained consistent all season long to place his stamp onto the speedway title in the WRWD Radio NEWS Sprint Car division. The Upstate Auto Pure Stock racers had three drivers vying for the title but when the final tally rang down it would be Steve Williams winning the title in the hotly contested Upstate Auto Pure Stock division to earn his second driving title at Accord. The Emmanuel’s Marketplace Fireball 4-Cylinder title found Jerry Kingeter the most consistent of a great group of competitors as he waltzed to title in the first year racing division.

The event brought out a nice field of drivers and racing equipment as the event served a dual purpose for the drivers who will be entering the spectacular “King of the Catskills” events scheduled for Saturday night, September 29th. The racing action during the evening was hot, heavy and hectic on the speedway with a few of the track titles still on the line.  Anthony Perrego was fast and furious as he captured his third win of the season in the Insinger Fuel Modifieds.  Chris VanDuser had a fast set of wheels under him as he claimed his first ever Accord win in the Arkel Motors Sportsman finale. John Hechinger captured his first ever Accord Speedway after a couple of competitors in front of him were found illegal and Hechinger was credited with the win in the Upstate Auto Pure Stock headliner. “Captain Quick” Jeremy Quick dominated the action to win his sixth feature of the season in WRWD Sprint Car action.  John Brown took over the lead on lap five and went on to capture his first ever win at Accord in the Rookie Sportsman finale. Two features for the Emmanuel’s Marketplace would prove to scramble the Fireballer’s point battle with Richard Smith capturing the held-over feature event while Mike Travis had more than enough ammo to shoot down the rest of the field in capturing his first feature win at Accord in the night-cap.

The Insinger Fuels Modified division found the veteran Ken Ferrier jumping out front at the start and setting a torrid pace in the event. Kyle VanDuser, Rich Ricci III and Nick Johnson took up the chase but seventh starting Anthony Perrego was making big waves while charging forward. By lap four Perrego had moved into fourth and one by one those in front of him fell prey to the fast running Perrego hot rod. Moving into the runner-up slot by lap seven Perrego tried a couple of different lines but Ferrier hung tough and continued to dice it out with the newly crowned champion. Perrego cleared Ferrier to take over the lead on lap ten and Perrego was rocking the house with some 13 second lap times to leave the rest of the field in his wake. Perrego would capture his third Accord Speedway win of the season with Ferrier a solid second place finish. Jimmy Wells would hustle to third place while, Mike Ricci and Danny Creeden would complete the top five. Kyle VanDuser would head up the second five with Rich Ricci III, the returning Michael Storms, Jesse Marks and Rich Eurich finishing up the top ten. With the win Perrego also won the qualified spot for the big Eastern States 200 to be held at the Orange County Fair Speedway in October.


The WRWD Radio NEWS Sprint Car feature found Jeremy Quick  an absolute rocket as he grabbed the lead from fourth starting place on lap one and he would the control the point the entire twenty laps to capture his sixth feature win of the season. MIck D’Agostino claimed runner-up honors and along with it, capturing his first Accord Speedway championship in the process.  The Malley Boys, Jordan Lawrence and Dan Malley followed with Gary Huston completing the top five.

The Upstate Auto Pure Stock finale proved to be an exciting as well as entertaining event as Jay Smalley jumped into the early lead with Travis Brockner taking up the chase. Smalley led until lap twelve when he drifted high in turn two and Brockner seized the opportunity to blast into the lead. Brockner would cross the line as the winner with Smalley in second but post race infractions found both cars disqualified and placed to the rear. John Hechinger, who had never won at the speedway in the past, was credited with the win with Steve Williams in second place. The finish would vault Williams to the championship. Emerson Cargain Jr was third while Livy Johnson, Mike DuBois, Chris Kanuk, Tim Southard and Rich Scott following.

Chris VanDuser got off to a phenomenal start in the Arkel Motors Sportsman feature headliner. VanDuser would receive a heap of pressure coming from Leo Fotopoulos, as the young driving star was competing in his final sportsman event before stepping into the Modified ranks. With the top four cars clicking off lap times in the 13.7 to 13.8 second mark, the racing was tight and calculating. VanDuser would never waiver in his quest to capture the win and fought off the advances of Fotopoulos time and time again. VanDuser would cross the line first for his first ever win at Accord while Fotopoulos was the runner-up. The newly crowned champion Kyle Rohner raced from tenth to take over third in the waning laps from the veteran Harry Baldwin who would earn a fourth place finish and Ryan McCartney completed the top five. Corey Cormier, in a second McCartney entry was sixth with Tyler Johnston, Alex VanPelt, Travis Green and Mike Senecal completing the top ten.

Robbie Colburn used his outside pole position start to grab the lead at the start of the WRWD Rookie Sportsman feature. Colburn was on his way to a huge lead but a caution brought the field to a halt. When racing resumed John Brown began to pressure Colburn and would take over the lead on lap six.  Brown was fast but Colburn remained behind him throughout the remainder of the event with Brown winning his first main event at the speedway. Colburn would be the runner-up with Brian Durbin, Jeff Higham, Michael Corbin, Erin Paulison and Samantha Muller completing the field.

The Fireballer’s held-over feature found Ken Barringer jumping out front early on and holding onto it despite constant pressure from a trio of hot rods. Barringer would lead until lap twelve when tenth starting Richard Smith pulled even with Barringer as they raced out of turn four. As they crossed the starting stripe Smith nosed his way into the lead and took over the lead for good in turn one. Smith would race to his fifth win of the season with Barringer second in what may have been his best finish of the season. Ed King, Brandon Conklin and Jeff DeGroat rounded out the top five while Willie DeGraw, Dave Bendell, Mike Travis, Jerry Kingster and Bob Clarke completed the top ten.

The second event for the Fireballer’s, Ryan Heady jumped out front and led for two laps before Mike Travis found the baseline to his liking and he took control of the lead. From then on it would Travis separating himself from the field as he cake-walked into victory lane for his first win in 2018. Jeff DeGroat, Richard Smith, Ed King, George Barringer, Brandon Conklin, Brent Shaddock, Ken Barringer, Bob Clarke and Nicole Nelson complted the top ten.

Despite the weather, Promoter Gary Palmer, gave the competitors a great track to race on resulting in some of the fastest times of the season in most divisions.  The talented roster of drivers tested the many racing channels of the speedway throughout the evening in preparation for the blockbuster “King of the Catskills” spectacular coming up on September 29th and sponsored by Insinger Fuels.

A moment of silence was observed for long time Accord and Orange County racer Craig Barringer who passed away last week. After his racing days he was a frequent visitor to the Accord Speedway. May he rest in peace.

There is a special benefit for the Al Mitchell Family on Sunday, September 16th starting with a car cruise from Ulster County (Old Office Depot) to Mariner’s Harbor in Kingston. Following will be Food, music, raffles, silent auction and much more for $20.00 with all proceeds going to the Al Mitchell Family to assist in offsetting his rising medical expenses.