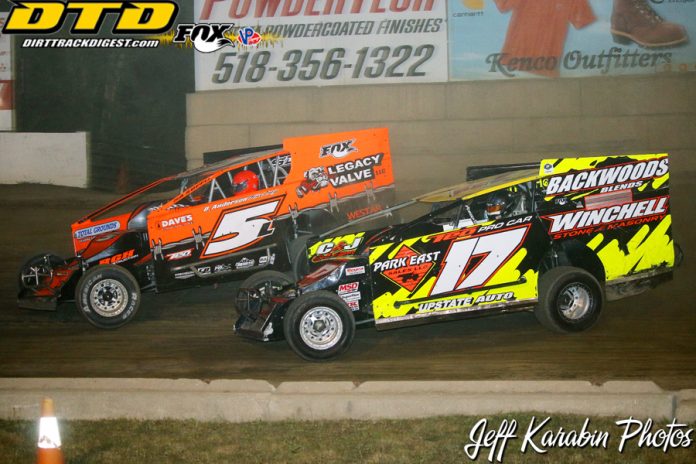 ACCORD, NY – Working rigorously under the quickly turning to fall skies settling over the Catskill Mountains, Accord Speedway Promoter Gary Palmer is putting the finishes touches the Palmer Family’s pristine quarter mile hot spot in preparation for the Grand-Daddy of all Accord Speedway events, “The King of the Catskills” premier battle at their Ulster County speedplant. Coming off a solid sixteen race schedule featuring nine different winners in the Insinger Fuels Modified division, the downside was frustrating as well with six cancellations, including a span of four straight weeks hindering the momentum the drivers reached in the early to mid-season portions of the season. Nevertheless, the regular season finished in a flourish with five champions crowned for the 2018 racing season and all champions earning their track titles with outstanding performances along the way. All indications will have the 2018 KOTC event on par with all of the great races that have taken place at “The Gem in the Catskills” events of the past. Saturday night, September 29th is the date on the calendar that marks the return of the prestigious King of the Catskills showcase event at the Accord Speedway. The sponsor for the $5,000.00 to win Modified feature will be Insinger Fuels located in Dushore, Pennsylvania.

Three supporting divisions will add to the luster of the high profile event with the Arkel Motors Sportsman division going head to head in a 602 Crate headliner that will pay $2,500.00 to the winner of the event. Yannone Enterprises and Superior Landscaping have come on board to boost the prize to the aforementioned winner’s share of the purse. The Emmanuel’s Marketplace Fireball 4-Cylinders will bring their bump and run hard racing efforts to the speedway with $500.00 going to the winner of the event based on at least twenty entries. The show will close out with the wild and zany Emmanuel’s Marketplace Four Cylinder Enduros chasing a $750.00 pay day based on fifty entries for the 50-lap excursion.

Coming off of the “Night of Champions” event last week to close out the regular season, some of the divisions at the speedway were tight in the point chases. When all was settled, heading up the list of 2018 track champions was “The Montgomery Missile” Anthony Perrego who enjoyed a great 2018 season and finished strongly to capture the Insinger Fuels Modified division title and in doing so captured his second Modified title at the track as he also was champion in 2016. “The Bushkill Bullet” Kyle Rohner was dominant all season and captured six wins during the season on his way to his fourth Accord Speedway title in the Arkel Motors Sportsmen division. “The Traveling Man” Mick D’Agostino spent the first few weeks transitioning into a new division but quickly learned the short way around Accord as he captured six wins and remained consistent all season long to place his stamp onto the speedway title in the WRWD Radio NEWS Sprint Car division. D’Agostino was a busy but happy young man last week as he also captured his second consecutive Hamlin Speedway Wingless 600 Sprint title. The Upstate Auto Pure Stock racers had three drivers vying for the title but when the final tally rang down it would be Steve Williams winning the title in the hotly contested Upstate Auto Pure Stock division to earn his second driving title at Accord. The Emmanuel’s Marketplace Fireball 4-Cylinder title found Jerry Kingeter the most consistent of a great group of competitors as he waltzed to title in the first year racing division.

Additional information regarding the “King of the Catskills” spectacular will be forthcoming as the days click off leading up the September 29th race date. Make your plans now for what will be a great outing in the rolling hills of Ulster County.