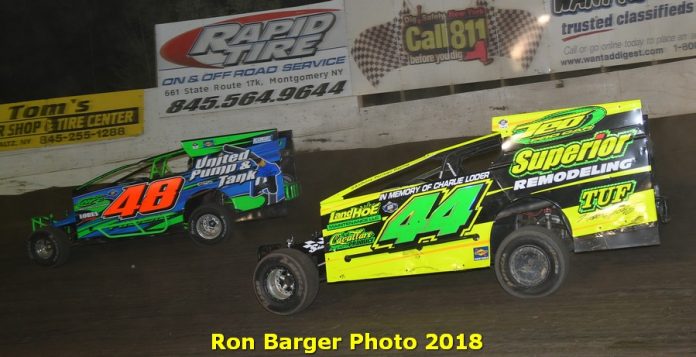 ACCORD, NY – The always popular King of the Catskills event at the Accord Speedway will be a great way for the Insinger Fuels Modifieds to cap off a solid year of racing events in the Catskill Mountains as the speedway prepares for it’s biggest Modified event of the season. Some of the big names in the Northeastern Modified ranks are set to converge on the tiny village of Accord, New York this coming Saturday night, September 29th to go head to head in a sixty lap battle royal and be named King of the event and along with it a big $5,000.00 payday offered up by Accord Speedway Promoters Gary and Donna Palmer. The expected huge crowd will have the opportunity to witness many of their favorite stars in action on the always pristine, semi-banked and very racy quarter mile speedplant as four divisions of racing have been selected to work their special magic out on the raceway. As always, the hard working Accord Promoter Gary Palmer has been feverishly at task to attend to his duties to give the the talented combatants a moist and tacky track surface they can race from wall to wall throughout the evening. The event is sponsored by Insinger Performance and Sunoco Race Fuels located in Dushore, Pennsylvania.

The evening of speed will bring out the Insinger Fuels sponsored ground pounding mighty modifieds in a sixty lap excursion as the hometown aces of the Accord Speedway will defend their home turf against the anticipated invaders of the Northeastern Modified world. The evening will bring in the King of the Catskills 60 lap event Modified event that will pay $5,000.00 to the first driver under the checkered flag at the end of 60 laps of the hard driving excitement. The Accord Speedway offers up some great in-house driving talent as the newly crowned modified track champion, “The Montgomery Missile” Anthony Perrego will be out to defend his turf as the 2018 speedway champion. Anthony enjoyed a great season in 2018 with three wins behind the wheel of the potent Superior Remodeling owned hot rod. Perrego, who earned his second modified title with the initial title coming in 2016, has been unbelievable in his treks up and down the Eastern Seaboard in 2018 with close to twenty wins on his racing resume.

The supporting cast at the speedway is diverse and solid with a mix of veteran campaigners to go along with the new breed of stars that has transitioned into the modified ranks in recent years. Heading up the veteran talent is “Iron” Mike Ricci, who scored the initial win in the King of the Catskills back in 2005 and won again in 2014. Ricci was leading the 2018 points until the last few weeks of the season when a series of malfunctions cancelled his efforts to earn another track title. His brother Rich is “The Chairman of the Board” at Accord with eleven track titles on his racing resume and four KOTC wins to his credit. Although held win-less in 2018, he enjoyed many great runs during the season and is always poised and ready to pull off another big win. The defending winner of the event, “Showtime” Danny Tyler took some time off of his racing efforts in 2018, but make no mistake about it Tyler can win from any angle of the speedway with his all out style style of driving. The 2011 winner of the event, “The Wild Child” Andy Bachetti captured one win early in 2018 at Accord as an invader and then returned to the fold as an Accord regular and captured three additional wins to claim the honors to be the driver with the most wins at the speedway in 2018. Bachetti brings a realm of racing excitement to any speedway where he competes.

The Modified roster at Accord is diverse with lots of talent throughout the ranks with names such as the “DC Express” Danny Creeden who enjoyed one win at the speedway in 2018 and is heading into Accord coming off a big win over the weekend at another speedway. Another multiple winner at Accord in 2018 was “Jammin” Jimmy Wells as he was able to stamp his tag on three wins during the season in his Upstate Auto wagon. Wells has reached start status at Accord with his always on the gas racing credentials. Another former winner of the event, “The Statesman” Jerry Higbie, captured one win at the speedway in 2018 and is always a threat at Accord no matter what race car he is steering.


Additional winners at Accord in 2018 include, “The Concrete Kid” Kyle VanDuser, “The Rhinebeck Rocket” Brad Rothaupt, “The KF Flyer” Kenny Ferrier and “Primetime” Scott Ferrier. Adding to the solid roster of talent includes, “The Marksman” Jesse Marks, “Double J” Joe Judge, “Little” Richard Smith, “Tommy Gun” Tommy Johnson, Nick Johnson, “The Lightning Bolt” Rich Ricci III, “Fast” Eddie Burgess, Alyssa Cody and Mark Pullen. Recent weeks have found “The Legend” Richie Eurich back in action and New Jersey’s Steve Davis, who in limited appearances, scored a runner-up finish and is coming a third place finish at another speedway over the weekend. Ray See Jr has also returned to competition and another driver who impressed in just a few starts is “The Twister” Tyler Boniface in his Halmar sponsored ride. “Kid Lightning” Michael Storms has put in a couple of runs at Accord during the season as has “The Dirt Diva” Allison Ricci in another Halmar sponsored racer. Many others will be showcased as they do their best to earn their way into the starting feature line-up and looking for the $5,000.00 pot of gold in the WRWD Radio Victory Lane.

A look back over the years at the prestigious event have shown a dominance of Accord regulars in being able to more than hold their own against the outside invaders. The event began in 2005 and has shown a great history of tremendous battles between both outside competition and the track regulars. “Showtime” Danny Tyler is the defending champion of the event and the following results range from 2015 to 2007, showing the many great names that have been victorious or have enjoyed great runs at the “Gem in the Catskills” facility.

History of the King of the Catskills