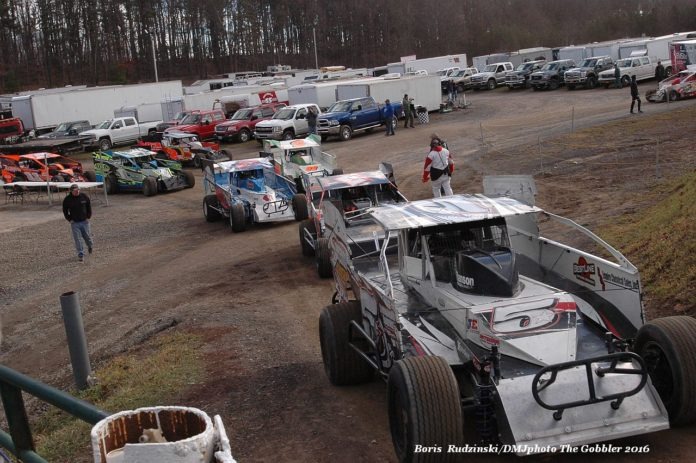 ACCORD, NY – The always popular King of the Catskills event at the Accord Speedway will be a great way for the Insinger Fuels Modifieds to cap off a solid year of racing events in the Catskill Mountains as the speedway prepares for it’s biggest Modified event of the season. Some of the big names in the Northeastern Modified ranks are set to converge on the tiny village of Accord, New York this coming Saturday night, September 29th to go head to head in a sixty lap battle royal and be named King of the event and along with it a big $5,000.00 payday offered up by Accord Speedway Promoters Gary and Donna Palmer. The expected huge crowd will have the opportunity to witness many of their favorite stars in action on the always pristine, semi-banked and very racy quarter mile speedplant as four divisions of racing have been selected to work their special magic out on the raceway. As always, the hard working Accord Promoter Gary Palmer has been feverishly at task to attend to his duties to give the the talented combatants a moist and tacky track surface they can race from wall to wall throughout the evening. The event is sponsored by Insinger Performance and Sunoco Race Fuels located in Dushore, Pennsylvania.

The evening of speed will bring out the Insinger Fuels sponsored ground pounding mighty modifieds in a sixty lap excursion as the hometown aces of the Accord Speedway will defend their home turf against the anticipated invaders of the Northeastern Modified world. The evening will bring in the King of the Catskills 60 lap event Modified event that will pay $5,000.00 to the first driver under the checkered flag at the end of 60 laps of the hard driving excitement. The history of the event regarding the Modifieds was dispersed yesterday and the today news will focus on the additional three divisions competing at the event. The Arkel Motors Sportsman will go to war in an event that will pay $2,500.00 to the winner of the sportsman edition of the King of the Catskills with the recent addition of added purse money being offered from Yannone Enterprises and Superior Landscaping.

The Arkel Sportsman Division at Accord has been a great mix of veteran campaigners and an influx of young talent, most of them transitioning from the Slingshot ranks of racing. The division is led by four-time track champion, “The Bushkill Bullet” Kyle Rohner. Rohner, who got his start in the Slingshot ranks, latched on to six wins during the season to handily capture the track title. Rohner has owned the baseline of the speedway and has shown the capacity to move around the speedway to find the quickest way to the front of the pack. “The Tornado” Tyler Johnston is a former National Junior Slingshot champion and has learned his lessons well as he scored one win and finished in the runner-up position in the 2018 points chase. “The Architect” Leo Fotopoulos, a one time winner in 2018, is another former Slingshot ace who was third in points in 2018 but has already announced his plans to step up into the Modified ranks in his NPS/Upstate Auto sponsored hot rod. “Kid Ice” Cole Hentschel was fourth in points and captured one win during the season and brings a ton of talent into the KOTC event. “The Big D” Daniel Morgiewicz, yet another former Slingshot star, really came into his own in 2018 as he earned top five honors and one win in the very tough racing division. “The Junior Rock” Matt Shultz picked up a win during the season and always brings his A-game to the arena. Nick Plumstead is a veteran of many trips around the Accord Speedway and is expected in for the event. Veteran campaigner Mike Senecal enjoyed a solid year of competition at the speedway and picked up a win along the way. Alex VanPelt is another of the up and coming driving stars who has transitioned out of Slingshot racing and has done great work in 2018. “The Jersey Force” Anthony Recchio is another former Slingshot star who has transitioned into Sportsman racing and has done well working within a limited budget but was able to steer the family owned 18-year old Bicknell race car to two wins in 2018.

Others expected in for the event include “The Chief” Harry Baldwin who has returned to the speedway in 2018 after a twelve year hiatus from the sport. Baldwin became quicker as the year progressed and is a solid racer at accord. Three time rookie winner, Charles Loiodice made his transition into the regulars look easy and has been fast all season in his 5L Enterprises machine. Another former Slingshot star, Chris VanDuser picked up a win late in the season as he continues to step up his racing resume. Travis Green is another of the three time Rookie winners who easily made the jump into the Sportsman ranks. New Jersey star, “The Angle” Cole Stangle was another three time Rookie winner who has transitioned into the Sportsman ranks with ease. Kevin Stevens picked up a win late in the season and a threat to win the event as his Dad did a couple of seasons ago. “The Cyclone” Jamie Yannone has been a part time campaigner at Accord in 2018 but always does a good job at any event he enters. Ryan McCartney returned to the speedway late in the season and has done good work since his return to action. Veteran RJ Smith, Dave Demorest, Mike Murphy, Shane Henion, Joe Coppola, and many others are expected in to vie for the big $2,500.00 prize offered for the win.

The Emmanuel’s Marketplace Enduro gang will be racing for $750.00 based on a fifty car entry list. In the past, names like George Zeininger, Johnny Bankich, Jeff DeGroat, Dave Donovan and Gene Helms have ruled the roost but the roster is deep in competition and no one ever knows who will rise to the occasion to earn KOTC honors.

Billy Liggan from Liggan Insurance Agency and the guru of the famous “Grandma Ann’s” pies in the WRWD Radio Victory Lane, has added an incentive for the ladies taking part in the King of the Catskills event. Billy is adding $200.00 for the first lady in the Modified division across the line. He has also added $150.00 for the first lady across the line in the Sportsman division, $50.00 for the first lady in the Fireballers and $75.00 for the Enduro ladies. Additional information regarding the “King of the Catskills” spectacular will be forthcoming as the days click off leading up the September 29th race date. Make your plans now for what will be a great outing in the rolling hills of Ulster County.

The 2017 results of the Sportsman and Enduro events:

Come out early and enjoy the great food, fun and above all the great racing.