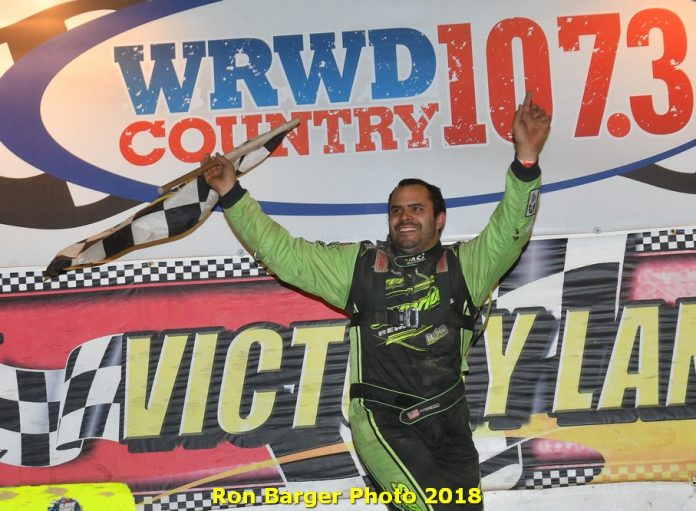 ACCORD, NY – Accord Speedway Promoters Gary and Donna Palmer welcomed in a crowd of 250 members of the racing fraternity on Sunday evening as they hosted their eighteenth annual Accord Speedway Banquet and Awards ceremony. The banquet took place at The Chateau Restaurant, just a few miles away from the speedway in Kingston, New York. The Palmer family completed another successful racing season at their pristine and exciting quarter mile speedplant nestled within the valleys of the Catskill Mountains. Although Mother Nature presented some problems along the way in 2018, the racing season proved to be both exciting and intense as a few of the championship titles came down to the final night of points at the speedway.

After a joyous and fun-filled cocktail hour, sumptuous dinner and dessert, the evening’s emcee and track announcer Steve Pados and his assistant Tim Adams took to the stage to begin the awards presentations. Division by division was announced as spectacular hardware and awards were handed out to all of the speedway’s champions and attending place finishers. The Champions also received championship jackets.

The Friday night Awards began with the Fireball Four Cylinders. Jerry Kingeter, on the basis of four wins took the title award for the Fireballers with Richard Smith, Jeff DeGroat, Willie DeGraw, Ed King, Anthony Taratino, and Nicole Nelson grabbing up the hardware that went with the spot in the hotly contested fender smacking division. In the over the top contested Upstate Auto sponsored Pure Stock division, Steve Williams captured the championship title highlighted by a five win season and capturing the title on the final night of
the season in the highly competitive affordable division at the speedway. Also honored were high place winners Emerson Cargain, John Hechinger, Bob Sleight Jr, Ray Tarantino, Livy Johnson, Chris Kanuk, James Goetchius and Rickey Scott.

The Arkel Motors Sportsman title found “The Bushkill Bullet” Kyle Rohner returning to the speedway and capturing his fourth championship at the Accord facility and led the division with six wins. Leo Fotopolous Cole Hentschel, Matt Shultz and Matt Senecal also picked up their hardware for a season well done. In the Rookie Class, only three were named and they were Travis Green, Charles Loiodice and Cole Stangle with each driver winning three events before moving to the regular Sportsman divisions.


In the Insinger Fuels Modified division, “The Montgomery Missile” Anthony Perrego emerged as the champion, his first ever Modified title at the speedway. Perrego was a four time winner during the season which included capturing his ever “King of the Catskills” victory. “Iron” Mike Ricci, “The DC Express” Danny Creeden, “Jammin” Jimmy Wells, “Double J” Joe Judge and “The Lighning Bolt” Rich Ricci III were recognized as place winners in the division.

“The Travelin Man” Mick D’Augustino became the third champion in the still relatively new WRWD Radio Sprint Car division at the speedway. D’Augustino scored six wins during the season. Mike Connelly and Jason Quick were also honored for their heroics on the speedway.

Many special honors were also handed out during the evening. The top Crew Chiefs were honored and the winners included Walt Howe in the Modifieds, Bobby Hentschel in the Sportsman and Tony Garaguso in the Pure Stocks, George D’Augstino in the Sprints and Nicole Nelson in the Fireballers. The top family in racing award at the speedway was bestowed upon the Rusty Creeden Family. The Grass Roots of racing awards went to the Green Family and Mike Ricci and Jimmy Wells. Joe Judge in the Modifieds, Danny Morgiewicz in the Sportsman and James Goetchius in the Pro Stocks were named the Most Improved drivers at the speedway.

Early practice sessions will open the speedway in 2019 with April 5th and April 12th practice time on tap for the drivers in all divisions to prepare for the 2019 season. April 20st will find the Palmer Family opening the speedway gates for their 19th season at Accord. For further updates and information regarding all of the news and additions to the Accord Speedway, log-on to the their well documented website at: http://www.accordspeedway.com or call the speedway hotline at: 845 626 3478.

Don’t forget the “Monsters in the Catskills” event for Monster Trucks, Saturday, August 10th at the Accord Speedway with Enduro cars as the added attraction. Pit Party begins at 3:30/truck racing begins at 7:30/ at a\Accord Speedway, 299 Whifield Road in Accord ,NY