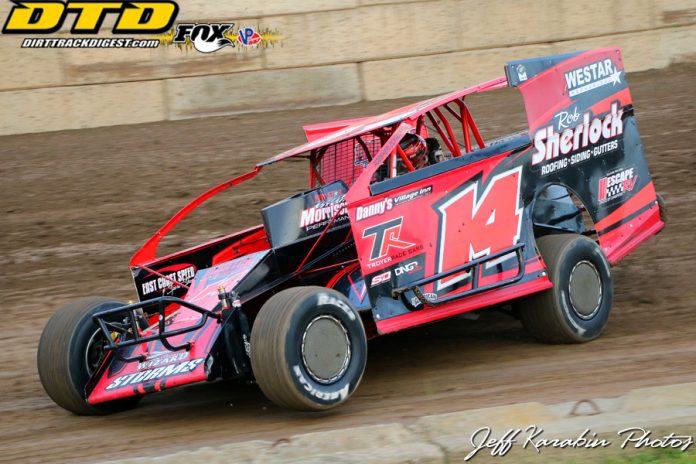 ACCORD, NY – Accord Speedway Promoters Gary and Donna Palmer presented an eight division show on Friday evening that went off without a hitch. The racing was sponsored by the good folks at Arkel Motors located in New Windsor, New York.

Michael Storms and Jesse Marks brought the field down for the start of the Arkel Motors 30-lap headliner for the Modifieds. Storms jumped into the lead from his front row starting spot and immediately found the center lane of the speedway much to his liking as he was able to control the top spot easily though the early laps until a restart slowed the action. On the restart Storms took off and would be challenged by Danny Creeden who came charging forward from fifth starting position. Creeden would make quick work of those in front of him and moved behind Storms for the chase. Andy Bachetti would move up by using all the lanes of the raceway and would move along side third place Jimmy Wells and the pair squared off in a heated dual and it would be Bachetti winning the battle off turn two to take command of third place. Jimmy Wells took over fourth and Randy Green rounded out the top five.

The Mid Hudson Concrete Sportsman event found Travis Green in the lead at the drop of the green flag getting some challenges along the way from Kevin Stevens. Green kept his hot rod at the top of the staircase in this run for the roses with constant laps of 13.570 to hold off all competition for the win. Stevens was the runner-up in this one while Matt Shultz and Corey Cormier kept trading places with Shultz winning the battle over Cormier. Hunter Lapp rounded out the top five.

Brian Durbin raced into the lead at the start of the WRWD Radio Rookie Sportsman feature attraction. Durbin had a fast car and enjoyed a quick breakaway from the field. Only in the latter stages of the event did former Pro Stock Champion Steve Williams get close. Durbin would go on to capture the event. Willams was second in a great showing, with newcomer Patrick Dempsey in third, John Velde IV was fourth and Billy Fiske rounded out the top five.

In the Upstate Auto Pure Stock event John Drake seized the moment and would lead all the way for the win. Jay Smalley remained close and would race to second with John Hechinger third, Codi Clark fourth and Chris Kanuck fifth.

“The Traveling Man” Mick D’Agostino would jump into the lead off turn four at the start in the WRWD Radio NEWS Sprint feature. D’Agostino would lead all the way as he withstood many challenges from “The Captain” Jeremy Quick to go on and secure his first win of the season. Quick would finish second with Dan Malley in third, Steve Kyzer fourth and Corey Wood in fifth place.

The hotly contested racing action was completed at 10:38 PM. Kudos again to Gary Palmer for working through the theatrics of Mother Nature to give the competitors an excellent racetrack.

A special thanks goes out to our friends at Arkel Motors.

Thanks to Joel Murns who assisted Steve Pados in the tower. 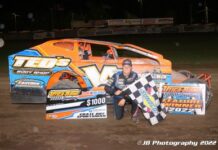