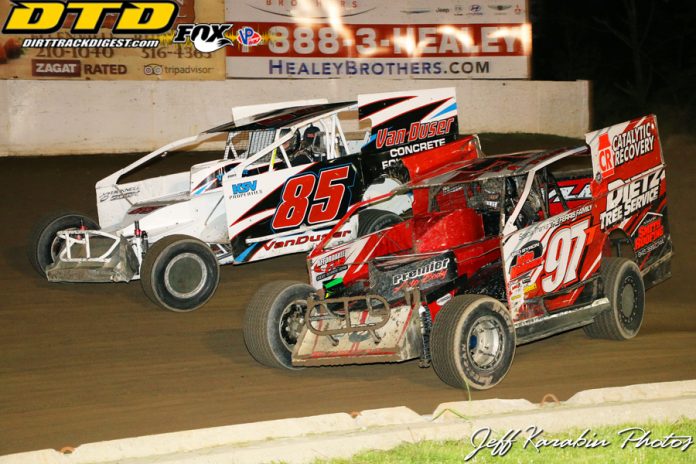 Kyle Van Duser dialed 811 to dig his way to a huge victory with over a 2 second lead over Bachetti and Storms on Dig Safely NY night!!!

Friday kicked off Father’s Day weekend with hot temperatures and some Hot racing as longtime supporters of the Accord Speedway – Dig Safely NY Dial 811, hosted the evenings events which included six divisions and an Enduro for the nights program.

The Arkel Motors Modifieds started their 30 lap feature with the 85 of Kyle Van Duser and the 16 of Richie Smith on the front row. Kyle Van Duser was dominant right from the drop of the green flag. He was able to pull away from the field throughout the race on every restart and held the fastest lap time during the race with a 13.278 second time. Further back in the field, Andy Bachetti in the 17 looked like he was on an unstoppable mission working his way through the field from his 10th starting spot with point leader Michael Storms following right behind him. The 555 of Leo Fotopolous was looking good in the second position but got caught up in a turn one caution. The 97 of Danny Tyler and the 16 of Dan Creeden had a great battle behind the leader as Bachetti and Storms rolled in line. A few cautions would fly again and the crowd was on their feet as now it was Van Duser, Bachetti, and Storms now battling for the lead. Each restart, Kyle Van Duser would pull away and pick up a huge victory! Bachetti would finish second over Storms, Randy Green, Creeden, and Danny Tyler rounding out the top six.

The Mid-Hudson Concrete Sportsman Feature had the 21 of Harry Baldwin and the 55 of Johnny Kendall take the field to the green. Turns one and two were not kind in the early portion of the feature with multiple cautions sending many drivers to the back of the pack. The car on the move was the 15 of Daniel Morgiewicz. He was able to jum to thefront row to battle with Kendall and eventually made the pass for the lead. Point leader Tyler Johnston, started mid pack in the 12th position and kept getting caught up in cautions, but eventually found him-self in the top five. As the checkered flag flew, it was Morgiewicz picking up the win over Stevens, Shultz, Johnston, and Loiodice.

WRWD Country 107.3 Rookie Sportsman Feature had the 24 of Durbin and the 53 of Williams lead the field to the green flag. Williams would take the high line and jump out to the lead. The 24 of Durbin would grab the second spot as the 25 of Armstrong got caught up in a caution and had to start in the rear of the field. For the second time in a row it would be Steve Williams getting the win over Durbin, Daley, Paulison, and Brewer rounding out the top five.


WRWD Country 107.3 NEWS Wingless Sprints Feature had the 611 of Corey Wood and the 91D of Mick D’aGostino take the front row at the start. D’aGostino had his notebook and got his car dialed in and was unstoppable. Jeremy Quick had a borrowed ride in the H2O and tried to catch D’aGostino. D’aGostino gets the win over Larry Ricci and Jeremy Quick.
Upstate Auto Pure Stock Feature would see the 36 of John Hechinger pick up a well-deserved and needed victory over Ryan Brockner and Walt Henry.

Dan’s Towing Fireball 4 Cylinder Feature would see another huge field of cars on hand as King and Barringer took the field to the green. At the end it would be the M28of Mike Travis picking up the win from the seventh starting spot. Kingeter would finish second over Barringer and Conklin.

Dial 811 Dig Safely NY Enduro – Johnny Bankich drove the J13 to the 40 lap victory over Jeff DeGroat aboard the M28 and the 84 of Timothy DeGrote.

Special Thanks to the great folks at Dig Safely NY for presenting the nights events and their long-time support!

This Friday, June21st, presents Kingston Nissan night! All divisions on the program with the NE Vintage cars returning to the speedway! Also, the following Saturday the Kenny Wallace Driving Experience will be at the speedway! Check out www.accordspeedway.com and get signed up!