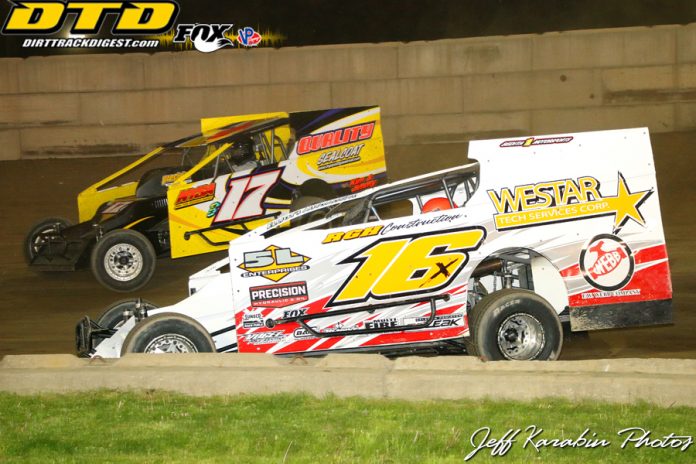 ACCORD, NY – The B17 Marks his spot on the 2019 win list! Jesse Marks pulls off an impressive win on Kingston Nissan Night at the Accord Speedway!!!

Friday night kicked off another beautiful weekend with hot temperatures and some Hot racing as longtime supporters of the Accord Speedway – Kingston Nissan, hosted the evenings events which included seven racing divisions and the North Eastern Vintage Modifieds returning for the second time for the nights program.

The Arkel Motors Modifieds started their 30 lap feature with the 406 III of Rich Ricci III and the B17 of Jesse Marks on the front row. Jesse Marks was dominant right from the drop of the green flag as he has been all season long. He was able to pull away from the field throughout the race on every restart and held the fastest lap time during the race with a 13.731 second time. Father and son – Rich Ricci Jr. in the 406 and Ricci III in the 406 III had an intense battle that lasted the entire race for the second and third positions. This was a huge bonus for Marks as he was able to pull away from the field with no contest for the lead. Cautions would fly a few times in turns one and two as cars would get together.

The winningest driver this season, Michael Storms was on a tear coming through the field from his eighth place starting position. Another caution in turn one while he was racing hard with the 16 of Dan Creeden and the 97 of Danny Tyler, which would end Tylers night. As the green flag was ready to fly, the 14 of Storms went pit side as he had motor issues ending his night also. AndyBachetti seemed to be the next dominant car as he drove his number 4 through the field. As the race continued, it was Marks out in front, the Ricci’s still side by b=side for second and third… Creeden all alone in the fourth position as Jimmy Wells cranked it up and grabbing the fifth position from Bachetti and Randy Green. Green was able to follow Wells and was able to secure the pass around Bachetti and hold on to a sixth place finish. Jesse Marks would pick up win number one on the season with Ricci III, Ricci Jr, Creeden, and Wells rounding out the top five.


The Mid-Hudson Concrete Sportsman Feature had the 27 of Danny Carlough and the 21 of Harry Baldwin take the field to the green. Turns one and two were not kind in the early portion of the feature with multiple cautions sending many drivers to the back of the pack. Many cars were battling side by side throughout the pack making it an awesome race for the fans! Last weeks winner in the 15, Morgewicz, had a great starting position but had to battle to finish in spot number three. The 24 of Shultz looked to be the car to beat in the early portion of the race, but the number 5 of Tyler Johnston decided to put on a clinic as he drove through the field and picked up another dominant win! Travis Green would finish second with Morgewicz, Johnson, and Shultz rounding out the top five.

WRWD Country 107.3 Rookie Sportsman Feature had the P3 of Kevin Murphy and the 24 of Durbin lead the field to the green flag. Durbin threw it into turn one like a man on a mission as he would take over the number one spot and never looked back. Steve Williams in the 53, who picked upthe last two feature event victories fought his way up to the second spot,but it would be Durbin picking up the victory. Williams would finish second followed by Murphy, Daley, and Higbie.

WRWD Country 107.3 NEWS Wingless Sprints Feature had the 6 of Steve Kyzer and the 91D of Mick D’aGostino take the front row at the start. D’aGostino had his notebook and got his car dialed in and was unstoppable as he has been all season. Kyzer had some trouble and would be out of contention for the win. Larry Ricci will finish second followed by Quick and Kyzer.

Upstate Auto Pure Stock Feature would see the 171 of Walt Henry pick up his first ever Pure Stock victory over a hard charging Hechinger finishing in the runner up spot. Henry dominating the field, and the only driver to run a GM 602 crate motor.

Dan’s Towing Fireball 4 Cylinder Feature would see another huge field of cars on hand again as Ken Barringer and Jeff DeGoat took the field to the green. Tons of crazy action took place throughout the field and a wild flip for Conklin going down the bactretch into turn three. The ride Conklin would take will bring out the red flag.. Conklin and DeGraw were racing for position as Conklin got into DeGraw comng out of turn two, both got a littleloose and Conklin going over on his roof. All ok and race was on, Jeff DeGroat would pick up the win over Mike Travis.

North East Vintage Modified Feature – Another healthy field of cars on hand as we turned back the clock for the second time this season. A great race was brewing as the cars took the green flag. The 333 of Schmidt looked dominant in the early stages but hammering down from the back was the 03 of Charlie Houghtaling taking the feature event win.
Special Thanks to the great folks at Kingston Nissan for presenting the nights events and their long-time support!

This Friday, June28th, presents our Fireworks Extravaganza! The nights events being presented by Dan’sTowing and Brian Hummel Home Improvement! All divisions on the program for the night