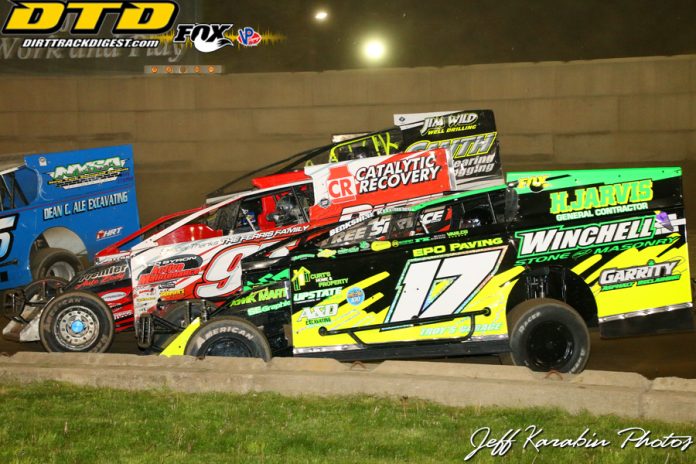 ACCORD, NY – The Palmer family kicked off the Fourth of July Independence week in an amazing way with a fireworks extravaganza presented by Dan’s Towing and Brian Hommel Home Improvement and when feature events came out on the track – it was SHOWTIME at the Accord Speedway!!!!!

Friday night kicked off another beautiful weekend with hot temperatures and again, some Hot racing as longtime supporters of the Accord Speedway – Dan’s Towing and Brian Hommel Home Improvement, hosted the evenings events which included a HUGE fireworks display and six racing divisions for the nights program.

The Arkel Motors Modifieds started their 30 lap feature with the 555 of Leo Fotopoulos and the 3j of Joe Judge on the front row. The 3j ofJudge jumped out to the early race lead but it was Showtime Danny Tyler in the 97 who was the man on a mission. Tyler had the inside second row starting spot due to having the back luck bug in previous weeks, but he was hungry to get out front.  Tyler was on a tear from the start, but back in the pack, Bachetti in the 17 looked strong as he was moving up through the field. Also, Michael Storms was on a mission, but got caught up in an early race caution putting him back to the rear. A few yellow flags would fly in the first half of the race, which would tighten up the field and made for some of the best side by side racing in the 2019 season! Coming from the inside of the fifth row was the 831 and current points leader, Jimmy Wells. Wells had a great side by side run with Bachetti and was heading to the front. Following his line was the 406 of Rich Ricci Jr. as he was fast, but had to battle with the 17 of Bachetti. As the checkered flags would fly, it was Showtime DannyTyler picking up his first win of the 2019 season with Jimmy Wells finishing second, Rich Ricci Jr, Andy Bachetti, and Anthony Perrego rounding out the top 5.

The Mid-Hudson Concrete Sportsman Feature had the 22 d of Aaron Doolittle and the 19 of Jason Feinberg take the field to the green. Caution flags would fly numerous times in the early stages of the race as Carlough in the 27 and the 38 of Stevens seemed to be the fastest cars. Kendall was also fast but got caught up in the mix with side by side racing. The 60 of Lapp was also on a mission after a few weeks of bad luck. The one who would make the moves on the high side and drove past them all was the 5 of Tyler Johnston. Johnston would run out of time as the 69 of Travis Green would take off and pick up the win! Tyler Johnston would finish second. Lapp in third, Lawrence fourth, and Kevin Stevens.

WRWD Country 107.3 Rookie Sportsman Feature had the P3 of Kevin Murphy and the 22 of Billy Fiske lead the field to the green flag. Showing up for the second time in the 2019 season, Daley in the 44 was fast from the drop of the green. Two time winner, Williams, had the car dialed in as he would finish in the second spot. Kevin Murphy would finish third as Brandon Daley will pick up the win.

WRWD Country 107.3 NEWS Wingless Sprints Feature had the 32 of Larry Ricci and the 3 of Jeremy Quick take the front row at the start. D’aGostino had his car ready for domination and was unstoppable as he has been all season. Jeremy Quick tried a few times for the lead, but was shut down quickly by the leader. Eric Jennings and Don Malley would round your top four

Upstate Auto Pure Stock Feature would see the 3 of Codi Clark and 85 of Kanuk bring the cars to the green flag. Another epic battle up front, but this week it will be Hechinger taking the win with Henry finishing second.

Dan’s Towing Fireball 4 Cylinder Feature would see another huge field of cars on hand again as Ryan Heady and Jeff DeGoat took the field to the green. Kingeter and Travis were fast right at the start. DeGroat was the car to beat as he picked up the win. Travis will finish second, Kingeter, Hazel, and Smith round out the top five.

Special Thanks to the great folks at Dan’s Towing and Brian Hommel Home Improvement for presenting the nights events and their long-time support!

This coming Friday, July 5th, track will be closed as we celebrate the Fourth of July.

Returning for July 9th, for the- Short Track Super Series invades the track with the Battle Of The Bullring