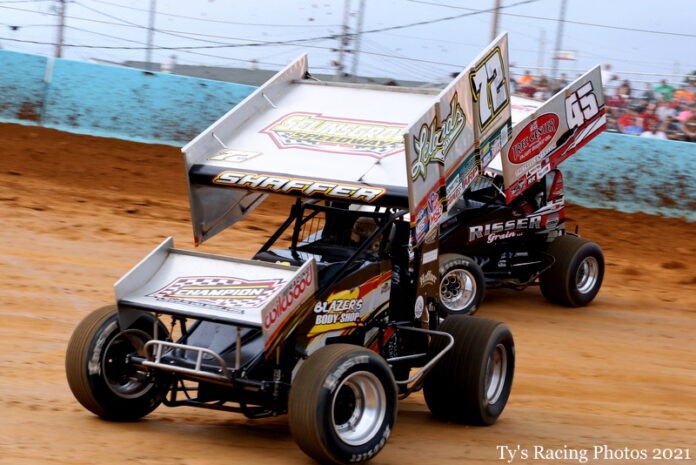 Dave Brown and Ryan Taylor battled for the top spot in the early laps of the main event. After trading slide jobs on opposite ends of the speedway Brown slide in under Taylor and made contact spinning.

Taylor showed the field back to the green flag with Mark Smith a close second in the following laps.

Smith wrestled the top spot away from Ryan Taylor on a mid-race restart during the 35 lap A Main. Lucas Wolfe also moved by Taylor on the restart to take second.

Smith had to “thread the needle” on last time in the closing two laps going around lap traffic to avoid a race with a fast closing Wolfe.

When the checkered flag fell it was Smith, Wolfe, and Tyler Ross the first three across the line to fill out the podium finishers.

The last time the 600 Micro Sprints were in competition at Action Track USA Snyder registered a top three finish and Barry Angstadt told Snyder it wouldn’t be long before he was standing in the winners spot.

Following a restart just past half way, Snyder drove around race leader Tyler Ulrich to secure the top spot for good.

Defending champion Colin White got to second, but settled for the runner up spot. Ulrich was third.

The Action Track is not racing this Wednesday, June 16, but will return with racing on June 23 with the Speedway Entertainment All Pro SpeedSTRs presented by VP Racing Fuel, the Hyper Racing 600 Sprints, and the All Star Slingshots in another exciting program that begins with warm-ups at 6 p.m.

All of the details can be found at www.actiontrackusa.com.