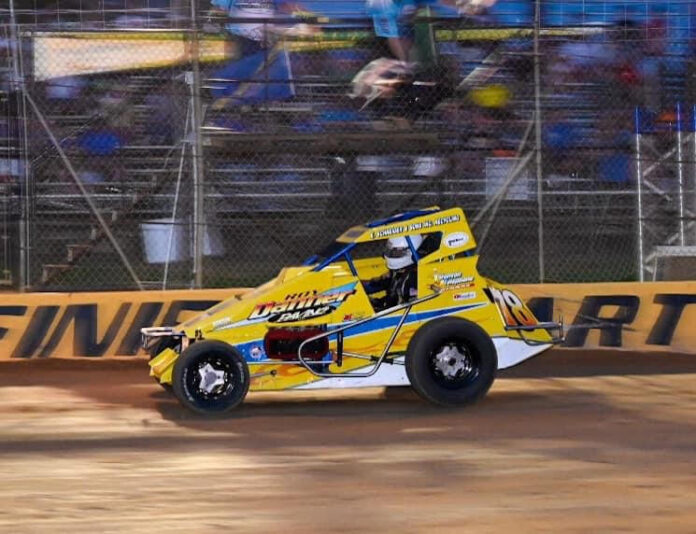 KUTZTOWN, PA — With one race remaining in the 2021 racing season at Championship Energy Action Track USA on the Kutztown Fairgrounds, four drivers have placed themselves on the doorstep of a point title in their respective divisions. For three of them, it would be their first championship effort at the Berks County oval.

When the final checkered flag waves on Tuesday, August 31, Briggs Danner, from Allentown, PA, hopes to be recognized as the Speedway Entertainment All Pro SpeedSTR point king. Danner, a two-time winner this season, carries a 111 point lead into the finale over Mike Bednar, who captured the opener back in May and came within a whisker of beating Billy Pauch Jr. in the recent Dick Tobias Classic.

Feature winners at Action Track USA collect 150 points, while the runner-up earns 125 points. Third place pays 100 points, meaning Bednar must win or finish second to even have a chance at unseating Danner from the top spot in the standings. If Bednar pulls off the win, Danner must finish 16th or better to clinch the title. If Bednar winds up second in the final feature, then Danner needs to finish no worse than 22nd.

Given the wild and extremely entertaining bullring environment at Action Track USA, Danner’s top priority will be to stay out of trouble that could sideline him early in the 30 lap main event.

Steve Buckwalter, last year’s SpeedSTR champion and a one-time winner this season, sits third in the standings and, facing a 143 point deficit to Danner, is certainly a long shot to win a second consecutive title. All Danner has to do is qualify for the feature and S. Buckwalter will be eliminated from championship contention.

Positions three through five in the standings are separated by just 46 points, so the final placement of S. Buckwalter, Alex Yankowski, and Billy Pauch Jr. could be altered on the 31st. Tim Buckwalter, Matt Janisch, Louden Reimert, Tom Mayberry, and Dillon Steuer currently reside in positions six through ten, with a 31 point difference between sixth and tenth.

Snyder caught fire in June and July, winning three in a row and four out of five races from June 13 through July 21. In addition to his victories, Snyder has been a steady resident among the top five finishers in this season’s 600 Sprint features.

Heading into the curtain-closer on August 31st, Snyder has built an incredible 321 point bulge over the defending champ of the 600’s, Colin White. And White has a 70 point advantage over third place Christian Bruno, who is just ten points in ahead of Tim Buckwalter. Several other positions among the top ten are still up for grabs in the season-ending 25 lap feature.

While Snyder has clinched his first title at Action Track USA, he’d like nothing better than to “put the icing on the cake” by winning his fifth race of the year in the finale. White is looking for his third victory of 2021 while Bruno, Tim Buckwalter, and Connor Gross try to visit Weaknecht Archery Victory Lane for the second time this season. And a whole bevy of most worthy candidates are ready to pull out all the stops in an effort to win their first of the year during the final race.

Brett Bieber, from Oley, PA, is looking for his second Action Track USA point title in the All Star Slingshot class. Bieber, the 2015 Slingshot champ, holds a pretty comfortable 135 point lead over Shelby McLaughlin—and they are the only two drivers with a mathematical shot at the crown.

McLaughlin, who won the Slingshot feature on July 28, must triumph in the season-ender and hope there are enough cars that can prevent Bieber from finishing 22nd or better.

The Junior Slingshot scenario has multi-time race winner Chase Schott holding an impressive 145 point lead over Jase Smith. If Schott gets stuck in traffic on the way to the track and Smith wins, the championship will go to Smith. That is about the only way for Schott to lose the point crown.

Pit gates open at 4 p.m. on August 31, with grandstand gates swinging open at 5:00. Warm-ups get underway at 6:15 and qualifying activity begins immediately following the hot lap sessions and National Anthem.

You’ve got one more chance (this year) to get your midweek motorsports adrenaline rush at Championship Energy Action Track USA on the Kutztown Fairgrounds…where the Superstars Come To Race!