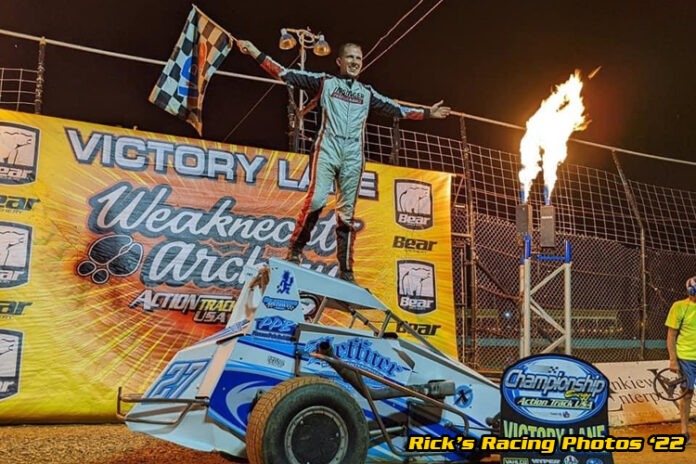 KUTZTOWN, PA – As the late Jerry Reed so eloquently sang, “when you’re hot, you’re hot” and Billy Pauch Jr. is red-hot at the moment.

Pauch Jr. blasted from his outside front-row starting spot to grab the lead over pole sitter Scott Houdeshell on the first trip around the clay. Houdeshell and TJ Mayberry diced for the runner-up spot while Mark Manieri, Dillon Steuer, Doug Snyder, and the Buckwalter cousins, Tim and Steve, waged war for positions four through eight.

TJ Mayberry finally secured second with four circuits remaining and Tim Buckwalter raced into the top five. The final caution period occurred with three tours left and on the single-file restart, the leaders banged bumpers, resulting in a spin by TJ Mayberry. The next attempt at a green flag saw Pauch Jr. dart away from his pursuers and Tim Buckwalter take over third place. On the final revolution, with Pauch zipping to his second consecutive SpeedSTR victory (and the 24th of his career at Action Track USA), T. Buckwalter slipped past Houdeshell to record the runner-up finish. Houdeshell registered the best finish of his young SpeedSTR effort by placing third, with 12th starter Steve Buckwalter finishing fourth and Mark Manieri earning the best finish of his first SpeedSTR season by crossing the line in fifth.

In the past week, Pauch Jr. won the SpeedSTR main in Kutztown, finished second in the King of he Catskills Modified race at Accord, NY, then earned a $5,000 payday for a Modified victory at Bridgeport Motorsports Park. He then returned to victory lane on Wednesday at Action Track USA.

“I’ve got to give credit to my guys; all the guys who have stuck with me through the highs and lows,” said Pauch in his victory lane interview. “We’ve been through a lot, and that’s what makes this hot streak so much better…I can enjoy it with them.”

The Hyper Racing 600 Sprint feature was wildly entertaining…and that is an understatement.

Fred Heinly snatched the early lead over Maddie Boyd but it wasn’t long before Colin White threaded his way past Ryan and Maddie Boyd to claim second. The crowd kept an eye on Alex Ruppert, too, as the Drydene No. 5 found the top and stormed into fourth as lap six was scored.

On a lap seven restart. White and Heinly began assaulting one another for the top spot, with Heinly throwing haymaker-style slide jobs and White responding by dashing back under him on the straightaways. Ruppert found himself locked in a fight for third with Pauch Jr. (who started eighth) while Tim Buckwalter, Steven Snyder Jr., and point leader Christian Bruno wrestling for positions inside the top five.

As the 25 lapper approached its halfway mark, White asserted himself at the head of the pack with Pauch getting by Ruppert and Heinly to gain control of second place. Wheeling the Rodota Trucking & Excavating No. R7, Pauch went on the attack, throwing huge sliders on White, who calmly drove back past Pauch to reassume command. The high speed scenario played out for several laps on both ends of the extremely racy speedway, with Heinly, Ruppert, T. Buckwalter, and Bruno slugging it out behind the front running duo—sometimes in four and almost five-wide formation.

Pauch eventually executed a slider, off turn four, that White was not able to counter, and Billy cleared his rival to lead lap 21. Pauch pulled away by a few car lengths but White remained within striking distance as the laps clicked off quickly. Behind the two leaders, the insanely competitive scuffle continued between T. Buckwalter, Bruno, Ruppert, Steven Snyder Jr., and a late race rally by Zack Weisenfluh. At the finish, it was Pauch recording his second triumph of the night, winning by three-tenths of a second over White, with Buckwalter nipping Bruno for third. Ruppert held on to finish fifth over a fast-closing Weisenfluh.

“I’ll tell you what,” said Pauch in Weaknecht Archery Victory Lane, “I’ll race with Colin White any day of the week. Someone who owns a big car would do well to put him in the seat. He runs super hard but very clean. He’s a really good racer who won’t take you out even if you’re running really close together. I really think highly of him and his ability.”

Brett Bieber, from Oley, PA, became the all-time leader in Slingshot victories at Action Track USA by winning his second consecutive (and fourth overall) feature on Wednesday. Bieber now has 14 career wins at Berks County’s number one bullring as he moved one victory ahead of Dylan Hoch. With the triumph, Bieber also padded his point lead with just one point-paying event remaining on the 2022 schedule.

“The Oley Jet” started fourth on Wednesday, methodically slicing his way forward until he ducked under early leader Amanda Angstadt to grab the top spot on the fifth trip past the flagstand. The race belonged to Bieber from that point on, but a fierce fight for third highlighted the final stages of the 20 lap affair.

Nolan Layser, Andrew Turpin, and two-time winner Tyler Hoch diced for positions three through five as Cody Kline ran a solid second to Bieber. At the checkered, it was Bieber winning again with Kline ending up with second place money.. Layser scored his best-ever Action Track USA finish by crossing the stripe in third, with Turpin holding off Hoch for fourth.

Matthew Laubach roared to his second Junior Slingshot victory of the campaign, and he did it in impressive fashion. Laubach passed the previous week’s victor, Chase Schott, to grab the early lead. He almost gave it away, however, as his No. 17L caught a divot in turn two and turned completely sideways with two tours in the books. Schott was right behind Laubach, and he twisted his mount into a half-spin to avoid contact with the leader. Laubach was able to straighten his car without stopping and drove away still in command, but Schott’s car came to a halt, forcing him to restart in the rear.

Laubach maintained a comfortable margin over Griffin Hendershot, Dylan Hahn, Aubrey Romig, and point leader Weston Doklan as Schott charged from the back of the pack. Hendershot closed the gap slightly during the middle stages of the 15 lapper, but Laubach opened up his advantage once again as the race neared conclusion.

Laubach won by nearly three-quarters of a second over Hendershot, with Hahn finishing in the final podium spot. Schott gassed his No. 10s back up to fourth and Romig wound up fifth in the race that took only four and one-half minutes.

Championship Energy Action Track USA opens its gates this Sunday, August 21st, for the highly anticipated ImPOSSEible, the second annual event featuring the winged 410 Sprint Cars and Hyper Racing 600 Sprints. Pit gates open at 3:30 p.m., with grandstand tickets on sale at 4:30. Heat in the motors and warm-ups get underway at 6:30.

Championship Night takes place on Wednesday, August 31, as the 2022 point champions will be crowned in each of the weekly divisions (SpeedSTRs, 600’s, All Star and Junior Slingshots).