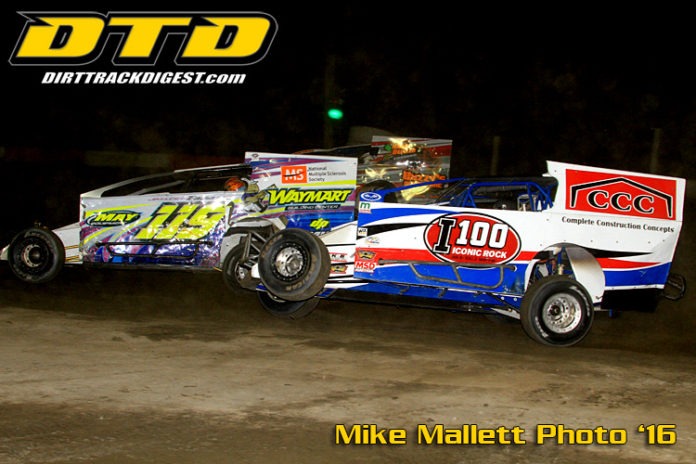 Ronnie Ford and I are the new promoters at the Afton Motorsports Park (A.M.P.).  We are getting ready to meet current and new fans, competitors and sponsors at the upcoming race car show at the Oakdale Mall. The event known as Southern Tier Speed World will be held this weekend Friday – Sunday during regular Mall hours. Then the following weekend they will also have their booth at the Motorsports Expo held at the Center of Progress Building at the Syracuse Fairgrounds on Saturday and Sunday. Saturday the show opens at 10am and closes at 8pm. Sunday it runs from 11am-4pm and you don’t want to miss either show to get schedules and visit with the tracks, drivers, and all the beautiful equipment.

(A.M.P.) will have their schedules for all to get up and to answer your questions along with season tickets for both spectators and racers alike. They believe the brand new shirts and hoodies from Bob Hilbert Sportswear will be in for the Syracuse show. They will have window stickers available for purchase. They will also have a special board honoring all their sponsors and asking you to support them when you need their products or services and tell them where you learned of their business.

Information that we know about that will be happening as the new era begins at the speedway where their motto is fun fast furious. All the track champions will be returning to defend their championships except in the Empire Sport Truck division where champion Rob Loucks as he will be moving full time into the Crate Sportsman division.

Andy Bachetti Modified, Charlie Hendrickson Jr. Open Sportsman, Harold Humphrey Crate Sportsman and Dustin Harris Street Stocks will be heavily contested for their throne as many returning stars are chomping at the bit to try to unseat the champs. Many phone calls and talking to folks we have heard about new drivers in just about every division ready to call (A.M.P.) their home in the 2017-racing-season.


A driver that is really excited about the upcoming season is Crankin Craig Pritchard who will be returning to racing in the Open Sportsman division after many years from being behind the wheel. His business Picture Perfect Pools and Affordable Spas will be one of the many sponsors on his car.

Rusty Smith after finishing second in points to Bachetti has been waiting for the season to start since the end of last season. Since we are on the subject of Rusty Smith please if you haven’t been voting for him on Facebook where he is a finalist for a major sponsorship from Champion Spark Plugs. You can vote once a day until March 23 at http://www.championautoparts.com/…/search-for-a-champion.ht… If you aren’t registered you will have to do this first. Let’s all show support to a guy and family who have been a loyal supporter to this sport for many years on asphalt and dirt.

Two shows for the Modified division will be returning for the Bob Hilbert Sportswear Short Track Super Series in the Halmar International North Region this season. The first will be the Afton Action Fifty a race replacing the Crazy 8 event. The other will be held on Saturday October 7 which is day two of the American Racer Cup Championship Short Track Super Nationals 10 weekend.

The American Racer Cup as mentioned above will be making a return to the speedway for the Modified division and this season for both the Open and Crate Sportsman divisions. It is a great program with good money on the line and Andy Bachetti who was the 2016 champion of this can attest to. Once you sign up you are eligible to win tires or certificates toward the purchase of tires.

Sprint cars will be highlighted in different variety also this season with three visits from the CRSA 305 Sprints. There will be a big special on Tuesday August 8 as the 360 Sprints of the ESS group will be in during the Earl Haliquist Memorial as they have been the past two seasons. The difference this season is they will run in conjunction with the mighty Modified division. The Front wheel drive four cylinder cars will round out the card. Lightning Sprints will also be at the speedway which are a smaller version of the full size Sprints.

A big special for Vintage cars are on the schedule also with one for display of vintage race cars and vintage cars with a lot of history to read and hear about on Saturday July 15. That day it will be just $2.00 admission for this event and yes you read it right just two bongo bucks. In September a vintage group that races will be coming in on our Saturday special.

Another great thing happening at the speedway that Ronnie and I are very proud of is the enhancing of the Kids Club. We will be moving it closer to the main area of the fans so folks can find it and be more involved. They also want to give at least one bike away to a lucky youngster but a pursuing sponsors so they can give one boys and one girls bike weekly. If you or your business would like to support are future racers and fans give either of us a message through our Facebook page or from the Afton Motorsports Park website.

Let us all visit the race car shows and think spring and lets go racing. Please support us in our first season and please support any and all short tracks everywhere.