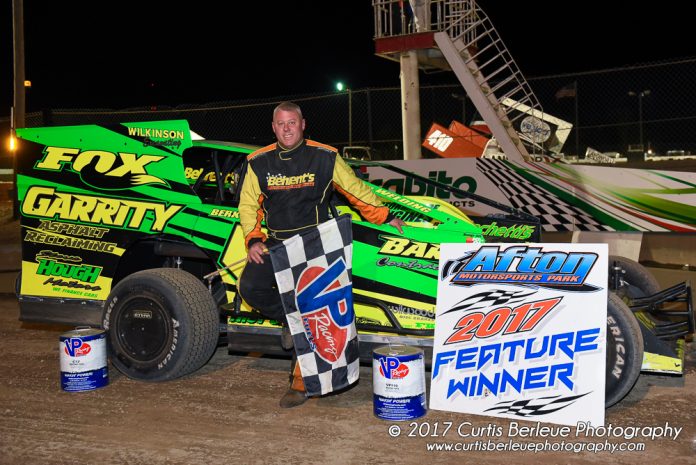 AFTON, NY – A jammed pit area of 103 cars at the Afton Motorsports Park on Friday night put on an entertaining racing show for those in attendance. Feature winners on the night were Andy Bachetti of Sheffield, MA who won his second consecutive Modified feature, Travis Smith of Binghamton, NY won the Open Sportsman feature with Cody Clark of Dolgelville, NY winning the Crate Sportsman feature, while Damon Decker of Afton, NY won the Street Stock feature, and Trey Palmer of Bristol, CT won the Four Cylinder Truck feature.

The Capital Region Sprint Car Association was also in action on this night, please check their website and releases for all of the information in a feature won by Kyle Smith.

Andy Bachetti and Mitch Gibbs paced the Modified field to green to start the 30 lap feature. Bachetti who won his heat impressively after starting near the rear jumped out to the lead over Nick Nye, Gibbs, Mike Trautschold, and Ryan Jordan. Nye hung with Bachetti for the first few laps until the defending track champion got heat into his American Racer tires and he started to pull away.

Bachetti was slowed by three caution flag periods as lap 12 was trying to be scored and on the double file restart Gibbs was able to sneak under Nye for second and that left a exciting battle for fourth between Alan Barker, Rusty Smith, and Brandon Walters.
With the top three all racing by themselves attention was focused on the battle for fourth and Walters finding the extreme bottom groove to his liking moved into fourth on lap 19. Barker did his best in an attempt to hold off Smith for fifth until lap 23 when Smith was able to move into fifth.


At the checkers Bachetti in for the win by nearly a half a track over Gibbs, Nye, Walters, and Smith.

Qualifying races for the Modifieds were won by Bachetti, Gibbs, and Nye.
Craig Pope and Jim Gould brought the Open Sportsman feature to green in their 20 lap contest. The wild action started with less than a half a lap complete as outside pole sitter Gould spun in front of the field on the backstraight. This resulted in a accident, which involved seven cars, no drivers received any injuries due to the safe construction of their cars.

On the restart Pope was able to grab the lead over Travis Smith, Tyler Hart, Jeff Bronson, and Butch Klinger. Pope and Smith put on a great race for the lead, racing side by side for the first six laps, while exchanging the lead three times officially during that period.

A second multi car accident in turn one on lap six shuffled the field once again and this time the red flag was brought out to clear the accident scene. No drivers injuries were reported but several heavily damaged racecars were taken off the track.

The final 14 laps was all Travis Smith as he led with ease to claim the win over Pope, Hart, Dennis Clapperton, and Dwayne Jackson.

Qualifying races were captured by Pope, Gould, and Dave Rosa.
AJ Digsby and Harold Humphrey brought the Crate Sportsman feature to green in their 20 lap feature. Humphrey was able to get the lead over Digsby, Matt Cole, Cody Clark, and Matt Brewer.

With Humphrey in front, Clark jumped to the extreme outside groove and marched his way to the front. Clark took third from Cole on lap three, second from Digsby on lap four, and on a lap six restart got the lead from his outside front row starting spot.

With Clark comfortably in the lead a gaggle of cars were all racing for second between Humphrey, Digsby, Cole, Brewer, and Allan Hodge.

Clark led the final 14 laps without any challenge to come home with the win over Digsby, Humphrey, Brewer, and Hodge rounding out the top five.

Qualifying races were won by Digsby, Humphrey, and Clark.

Dustin Harris and Damon Decker started the 20 lap Street Stock feature on the front row. Decker was able to move from his outside front row starting spot to the lead over Doug Polhamus, Matt Bowman, Harris, and Dave Cronk.

The leading trio of Decker, Polhamus, and Bowman set a blistering pace as they battled for the lead during the caution free event. Meanwhile Harris, Cronk, and Doug Stack, Jr. had their own private battle for fourth, fifth, and sixth.

At the checkers Decker in for the very popular win over Polhamus, Bowman, Harris, and Stack, Jr.

Qualifying races were won by Harris and Decker.

Ralph Cuozzo and Bob Crandall led the Four Cylinder Truck field to green to start their 15 lap feature. Cuozzo jumped out to the lead over Crandall, Trey Palmer, Jerry Lanfair, and Brandon Clapperton.

Cuozzo held the lead while Palmer in his first ever trip to the track worked the outside groove. It took him a couple of laps to get use to the track, but when he did, he made everyone take notice.

The qualifying event was won by Cuozzo.

NEW ERA NOTES; Once again even with the added division the show started on time with all qualifying completed in just 70 minutes. Yellow flag fever ruled all of the features, which did stretch the show out to a 10:55 finish. Track in good condition but it did dust up later due to the strong Southeast wind, both water trucks breaking down, and many racing  machines in competition. Modified runner Brett Tonkin saw his night end in hot laps with a blown motor. Street Stock runner Doug Stack, Sr. experienced mechanical woes in hot laps knocking him out for the night. One lucky boy in attendance did win a bicycle with Modified feature winner Andy Bachetti drawing his name. The track debuted a weekly racing program with stories, photos, drivers roster, points, and other information. Handicap will determine heat and feature lineups starting this Friday night.