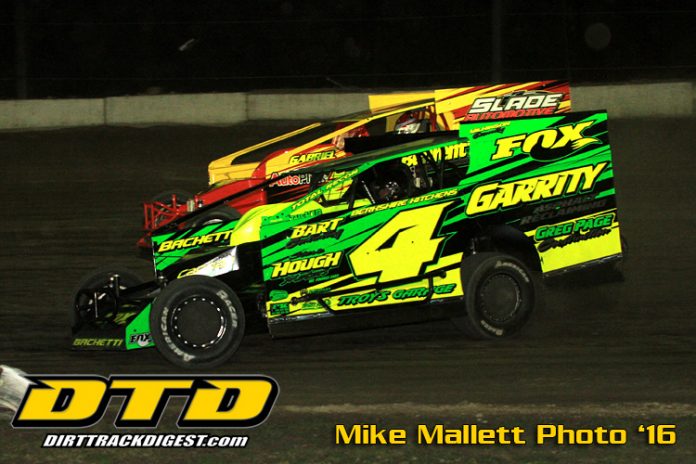 AFTON, NY – The beat goes on for Andy Bachetti at the Afton Motorsports Park as he won his fourth consecutive Modified feature in a row on Friday night. The Sheffield, MA driver started 12th and took the lead with a turns three and four sweeping outside pass of race long leader Kurt Decker on lap 22 and went on for the win. Alan Barker, Decker, Steve Babicek and Brett Tonkin completed the top five.

Relatives Aaron Shelton and Butch Klinger raced for the Open Sportsman feature win with Shelton of Walton, NY getting the win and bragging rights over Klinger, Claude Hutchings, Jr. Bill Deckleman, and Travis Smith rounded out the top five.

Sherburne, NY youngster Allan Hodge won the Crate Sportsman feature as he had to put up with a 30 minute rain delay during the event. Tim French II, Harold Humphrey, Cody Clark, and Daniel Morgiewicz completed the top five.


Kurt Decker jumped out to the lead at the start of the 30 lap Modified feature over Brett Tonkin, Steve Babicek, Matt Roberts, and JR Hurlburt. Decker who put in the hot setup in his sons’ Street Stock, that has won three features in a row was running the exact same groove and opened up a little bit of a lead.

Tonkin, Babicek, and Roberts were putting on a crowd pleasing race for second as each driver held that position for at least two laps before being passed. Unfortuneately for Matt Roberts he pulled into the pits just after making an impressive move from fourth to second on lap eight.

Up front Decker was still holding the lead as he was followed by Babicek, Alan Barker, Tonkin, and Hurlburt. Barker using his favorite extreme high line moved past Babicek for second on lap 14 and quickly closed in a Decker for the lead.

At the halfway point with the field now beginning to string out this allowed Mitch Gibbs and Bachetti an opportunity to get to the front. When the outside suddenly opened up on lap 17 Bachetti jumped at the opportunity and quickly moved from seventh to fourth and the race to the front was on.

Bachetti powered around Babicek for third on lap 18 and at the time he was a full straightaway behind the leading duo of Decker and Barker. Then the racing gods shined down upon Bachetti on lap 19 as the yellow lights flashed on for Mike Trautschold who was in the third turn outside wall.

On the single file restart with 11 laps to go Decker still held the lead entering turn one. Barker tried his best to hold off Bachetti entering the turn, but Bachetti turned the car on a dime and quickly got underneath Barker and moved into second as they exited turn two.

Decker who had been running the middle of the track the entire race moved down the track just a bit and that was all Bachetti needed. Entering turn three coming around to complete lap 22 Bachetti made his patented turns three and four sweeping outside pass to grab the lead.

Once in front Bachetti was long gone while Decker and Barker raced for second with Barker getting around Decker with five to go.

Bachetti in for the win and he said afterwards ” the guys are stepping their game up and that makes it tougher for me each week. I had to step my game up tonight or I would not be here in victory lane. ” Barker, Decker, Babicek, and Tonkin completed the top five.

Qualifying races were won by Tonkin, Decker, and Gibbs.

Dave Rosa and Steve Andersen led the 20 lap Open Sportsman feature to green with Rosa getting the lead over Skip Pickwick, Andersen, Aaron Shelton, and Butch Klinger. Pickwick brought out the only yellow of the race on lap two as he executed a 360 spin in the middle of the backstraight, the yellow was displayed in the interest of safety.

On the double file restart Shelton hugged the inside groove to go from third to first followed by Rosa, Klinger, Andersen, and Claude Hutchings, Jr. Klinger was able to get under Rosa for second on lap four with Hutchings following suit one lap later.

Up front Shelton was setting a blistering pace and this made it difficult for the veteran fast duo of Klinger and Hutchings to make any ground up to challenge for the lead.

Two drivers making some noise coming through the field were Bill Deckleman and Travis Smith. They started together in the sixth row and at the drop of the green Deckleman took to the outside groove with Smith right on his back bumper. Deckleman quickly got into the top five on lap seven while Smith had some trouble getting to the front.

Shelton meanwhile was having his way up front despite heavy lap traffic as he kept the same distance between him and the second place car of Klinger. Shelton in for the win over Klinger, Hutchings, Jr., Deckleman, and Smith who got past Rosa on the final lap for fifth.

Qualifying events were won by Deckleman, Pickwick, and Shelton.

Cole led the first four laps before Hodge got under him in turn two to get the lead and then two laps later Cole pulled in the pits ending his night.

With a drizzle now falling the race stayed under green with Hodge in the lead over Digsby, French, Humphrey, and Cody Clark. French got past Digsby for second on lap eight in heavy lap traffic, while Humphrey was able to grab third on lap 13.

The only yellow of the event came out on lap 14 as the drizzle which had been falling from the start turned into a rain shower. The field was sent to the pits to wait out the rain shower and the track maintenance crew went to work on the track.

After a half hour the field was called to the track to complete the final six laps. On the restart Hodge jumped out to the lead over Humphrey, French, Clark, and Daniel Morgiewicz, who was making his first start ever at the track.

Hodge led the rest of the race with ease for the win over French who got past Humphrey for second with Clark in fourth and Morgiewicz in fifth.

Qualifying heats were won by Humphrey, Cole, and Clark.

The race for the lead would heat up immediately as invader Wolf applied heavy pressue to Harris as they raced for the lead. Wolf was able to get around Harris for the lead and he led laps four and five.

Exiting turn four to complete lap six the move of the race was executed by Decker. Wolf who was leading at time slipped up the track just a bit and Harris stayed in the bottom groove.

Decker shot the gap in the center and came out of the three wide race with the lead.

The remainder of the caution free event was all Decker as he kept a comfortable distance between himself and Wolf. Decker in for his third consecutive win over Wolf, Polhamus, Harris, and Cronk.

The qualifying race was won by Harris.

Christensen grabbed the lead over Jeff Young, Ralph Cuozzo, Lanfair and Dustin Wilbur. Cuozzo moved to the top side of the track to grab the lead on the next lap with Trey Palmer moving into fourth at the same time.

Cuozzo raced like a man on a mission and immediately opened up a big lead. Palmer meanwhile moved into third on lap three and one lap later took second from Christensen.

Cuozzo maintained his lead at the halfway point as Palmer tried everything to cut into the big lead of Cuozzo. Christensen and Young set up their own private race for third at the same time.

Cuozzo in for the win, his second in a row over Palmer, Young, Christensen, and Wilbur. In Victory Lane Cuozzo dedicated the win to Eric Wagner and stated that he was going to present the special trophy that he received to Eric’s parents.

The qualifying event was won by Palmer.

NEW ERA NOTES; the fine people of Pit Stop Auto sponsored the nights racing and enjoyed themselves in the VIP Room all evening long. After a hard week of track work the racing surface was back to it’s normal self with plenty of bite. Bob Crandall blew the motor in his Four Cylinder Truck during the heat race, ending his night. Travis Welch had to give up his outside pole starting spot in the feature as mechanical gremlins in the heat race sidelined him for the night. Eric Wagner was a Four Cylinder Truck racer at the track who lost his life due to a bee sting, his old truck was in action with Bill Cooper racing it. The Auto Plus Street Stocks have been added to the Wednesday June 21st show featuring the Afton Action 50 for the HALMAR Short Track Super Series Modifieds plus Crate Sportsman. The Cam Doctor made a surprise appearance as the top five in the Crate Sportsman feature all underwent extensive inspection on the motor and all five passed. Despite a gloomy day weather wise only a brief shower hit the track at 5 pm and during the Crate Sportsman feature. Due to the weather the show started two minutes early at 6:58 pm and ended at 9:58 pm and this included a 30 minute rain delay during the Crate Sportsman feature.

For more information on Afton Motorsports Park please log on to the World Wide Web at www.aftonmotorsportspark.com.