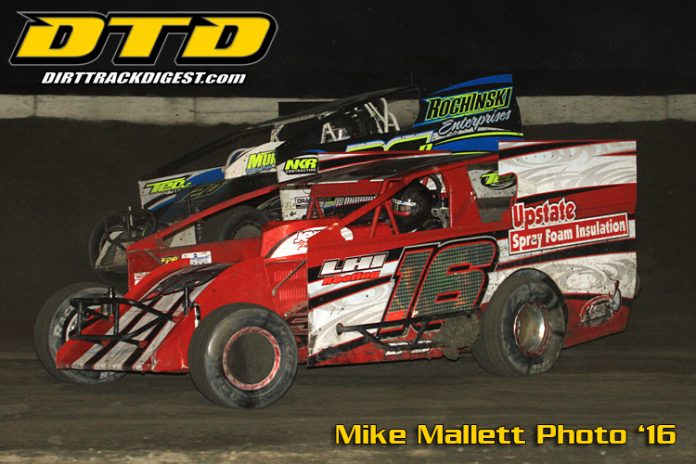 AFTON, NY – He’s known as the ” Highside Hustler ” but on Friday night at the Afton Motorsports Park Alan Barker of Norwich, NY used every inch of the smooth, racey track surface to claim his first feature win of the year in the 30 lap Modified feature. He took the lead on lap 18 from Brett Tonkin and went on to the win over Mitch Gibbs, Nick Nye, Tonkin, and last place starter Ken Titus.

For the first time in his 12 year racing career Dave Cronk of Walton, NY won the 15 lap Street Stock feature. He led the entire distance to claim the win over Doug Polhamus, Damon Decker, Dustin Harris, and Matt Bowman.

Matt Roberts and Brett Tonkin brought the Modified feature to green to start the 30 lap event with Tonkin taking the lead over Roberts, Kurt Decker, Rusty Smith, and Paul Jensen.
With a very wide race track to compete on, the drivers were using all available grooves in an attempt to get to the front as quick as possible. Jensen quickly moved from fifth to third on lap three while Andy Bachetti rocketed from 12th to fifth at the same time.

However the night would end for Bachetti on the next lap as he jumped the berm in turn one  and he lost several positions. In an attempt to regain those positions as quickly as possible he tried to go through the center of an already three wide battle in front of him exiting turn two. The resulting contact bent the front end of the Bachetti car enough that he spun out entering turn three collecting Alex Tonkin in the process. While Alex Tonkin was able to pit, make repairs and continue to race, Bachetti’s crew worked to repair the damage suffered but was unable to complete the repairs in time before the race returned to green and called it a night.

On the lap six restart Brett Tonkin using the extreme high side stayed in front with Roberts in second, Trautschold in third, Alan Barker in fourth and Jensen in fifth. Trautschold spun in turn two on lap seven to bring out the yellow and this moved Mitch Gibbs who started 14th into fifth.

Brett Tonkin continued to lead on the restart with Roberts using a new engine under the hood holding on to second with Barker all over him for the spot. Jensen, Nick Nye, Gibbs, JR Hurlburt, and last place starting Ken Titus all now raced for positions four through eighth.
At the halfway point Tonkin held a slim lead over Barker who just got passed Roberts for second, Gibbs meanwhile was glued to the bottom and raced in fourth with Jensen in fifth.
Coming down to complete lap 18 Barker got under Tonkin exiting turn four to grab the lead for good and once in front Barker opened up a big lead.

Gibbs meanwhile got under Roberts for third on lap 20 with Nye moving into fifth as Jensen pulled into the pits.

The final restart of the race took place on lap 23 and that didn’t phase Barker one bit as he opened up an even bigger lead this time. Gibbs was able to get underneath Tonkin for second on lap 27 but didn’t have enough time to catch Barker for the win. Nye was able to get past Tonkin for third with a lap to go and ended up third with Tonkin in fourth and Titus holding off Smith for fifth at the checkers.

In Mirabito Energy Products Victory Lane Barker had this to say, ” A couple of weeks ago we found something and each week since we have been fine tuning the car and tonight it was just about perfect as we passed a few guys up top, a few on the bottom, and a few in the center. The race track was very wide and you could race from top to bottom all the way around, nice job to the track crew. ”

Qualifying events for the Modifieds were captured by Tonkin, Decker, and Nye.

A pair of 73’s paced the Open Sportsman 20 lap feature at the start with Steve Andersen grabbing the lead over Dwayne Jackson, Craig Pritchard, Dan Burman, and Claude Hutchings, Jr.

Hutchings moved into fourth on lap two and was followed by Butch Klinger into fifth. The march to the front of Hutchings continued as he took third from Pritchard on lap three and settled into that position for the time being.

On a lap 12 restart Hutchings was able to move past Jackson for second behind leader Andersen with Klinger in fourth and Don Hart, Jr. in fifth. Andersen maintained his lead as Hutchings was right on his back bumper waiting for a mistake, meanwhile Hart got past Klinger for fourth on lap 16.

Veteran race fans knew that Hutchings was setting up Andersen for the winning pass as he kept following him in the bottom groove as the laps clicked off. Most thought that Hutchings showed his hand too soon as he jumped to the outside of Andersen in an attempt to get the lead on lap 17 just as the yellow came out to disallow the pass.

On the restart Andersen who had raced exclusively in the bottom groove all race long stayed there as Hutchings once again moved to the outside groove. With the two go to signal being displayed by starter and birthday boy Gary Kinne, Hutchings made the winning pass and went on to the win over Andersen, Jackson, Hart, and last weeks feature winner Aaron Shelton who got past Klinger on the final turn.

A pair of Matt’s brought the Crate Sportsman 20 lap feature to green with Matt Priscott getting the lead over Matt Cole, Tim French II, Matt Brewer, and  John Christian. French moved into second on lap two with Christian taking third from Cole at the same time.

On a lap four restart the big move took place by Harold Humphrey as he moved from sixth to second as French took the lead from Priscott on the restart with Christian now in fourth and Brewer in fifth.

Humphrey racing like a driver determined to win quickly displaced French for the lead on lap five, Christian moved into second on lap seven with point leader Cody Clark taking fourth at the same time.

On a lap eight restart Humphrey opened up another big lead with Clark now in second over Christian, French, and veteran racer Rich Coons who was making his first visit to the track this year now in fifth.

A trifecta of racing battles emerged over the last half of the race with Humphrey and Clark for the lead, Christain and Coons for third, with father Tim French and his son Tim II racing for fifth.

Everytime it seemed that Clark would cut into the lead of Humphrey, Humphrey would pick the pace up to open the lead back up. Christain meanwhile stayed consistent in his racing groove to keep Coons at bay for third.

Humphrey in for the win, his second in three weeks over Clark, Christian, Coons, and following a wild scramble exiting turn four Cole ended up in fifth.

Harris moved into second on lap two while Polhamus took third from his teammate Bowman on lap three. Polhamus took second from Wilbur on lap four and found himself a full straightaway behind leader Cronk at that point, Decker moved into third on lap five.

The remaining ten laps were anti climatic as Cronk drove to his first ever career feature win in 12 years of racing over Polhamus, Decker, Harris, and Bowman.

Brandon Clapperton and Jerry Lanfair brought the Four Cylinder 12 lap Truck feature to green.
Exiting turn two on the opening lap it was a three wide race for the lead and when the lap was scored Bob Crandall was the leader over Ralph Cuozzo, Trey Palmer, Clapperton, and Jeff Young.

With Crandall in front Cuozzo and Palmer raced hard for second with Young and Clapperton doing the same for fourth.

On lap five Palmer raced around Cuozzo for second with Young getting past Clapperton for fourth, Clapperton in his new truck got past Young for fourth on lap seven.

Up front Palmer who drives nearly five hours to Afton to race as his Truck is housed in nearby Sherburne, NY took the lead from Crandall with four laps to go.

Palmer in for his second win of the year over Crandall, Cuozzo, Clapperton, and Matt Johnson who inherited fifth when Young when pitside with a flat tire.

NEW ERA NOTES; many drivers complementing the track maintenance crew for the improving track conditions which featured an even smoother track with plenty of bite in the surface. The fine folks of Ted’ s Body Shop sponsored the nights racing and enjoyed themselves in the VIP Tower during the fast moving racing program which ended at 9:55 Friday evening. Popular Open Sportsman driver Skip Pickwick had his engine swallow a valve while loading the car at home and that ended his night. Charlie Hendrickson, Jr. had an axle break on his trailer a mile from the track, it was repaired and he arrived to make the heat race however mechanical gremlins sidelined his primary ride so he took a lap in the Bill Deckleman Sportsman in the feature. Track management is happy with the Four Cylinder Truck count as it keeps increasing, while very disappointing in the decreasing Street Stock car count, which will force a decision to be made on the future of the division real soon.

Afton Motorsports Park is fast, fun, and furious, come check us out!