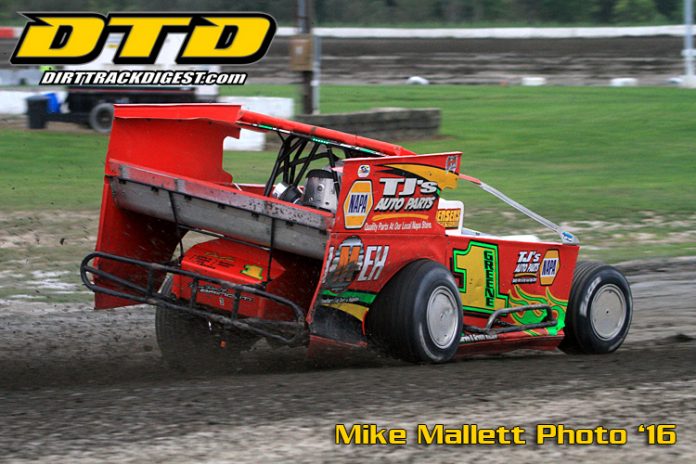 Racing action at the Afton Motorsports Park (A.M.P.) started the last Friday in April and has now completed its first quarter of its racing season. The track that was formerly known as the I-88 Speedway for the past seven years located at the fairgrounds in Afton is now under the promotional partnership of Ronnie Ford and myself. I want to take a quick look on what has transpired so far and some of what is going to be coming up as we have just completed our very first week of this busy month of June.

There has been six races scheduled with five of them being recorded and one won by everyone’s enemy of racing Mother Nature back on May 5. All but two have been under the threat of rain which is never good for any track on race day. The competition in both of the Sportsman divisions Open and Crates have been incredible with very good car counts and four different winners in as many races to up to this past Friday night when we had our first repeat winner. The Open Sportsman under the sponsorship of Scorpion Security Products have seen these winners, Claude Hutchings Jr (84Jr.), Travis Smith (33T), Donnie Hart (35), Aaron Shelton (391) in that order. The first to repeat is the one that started it all off and that is Claude Hutchings Jr. I look for others to park themselves in the Mirabito Energy Products victory lane also this season.

The Crates Sportsman division run under the sponsorship support of Ted’s Body Shop of New Berlin, N.Y. The winners to date have been in the following order from first to most recent has been Matt Brewer (00B), Cody Clark (4), Harold Humphrey (78H) and Alan Hodge (7H). Harold Humphrey also became the first repeat winner in this very action packed division. The night was sponsored by Ted’s Body Shop but unfortunately Travis Welch co-owner with his Dad of Ted’s who competes in this division blew his motor the previous week and didn’t race on his night. The racing throughout the pack has been second to none as the competitors have really stepped up there game so far in the 2017-racing-season.

The ZMK Construction Modified division when you look at just results you would think that it has been a Andy Bachetti (4) only show but that would be far from what has really been going on during the entire race. The first two weeks we ran draw and heads up for all classes and if you were lucky on the heat draw and took advantage in your heat you were up front at feature time. Bachetti who has his program at this track at a very high level right know was able to dominate the first two weeks. Week three when handicapping took affect the drive to the front was much harder. Bachetti was able to catch leader Mike Trautschold (28) behind lapped traffic with two to go and was able to power to the outside to garner his third consecutive triumph. Week four it was much of the same as Bachetti had to work from his twelve starting spot to get back to the front. He first ran down Alan Barker (b16) for second and then finally getting by front running Kurt Decker (89). The most recent event saw the first new winner as Alan Barker went to victory lane on this night to receive the The Trophy Guy winner trophy in victory lane. Bachetti had his night come to an end early as he had a hole close as he was coming through and collapsed his front end. Barker looked really strong on this night and looked liked the winner early on. The previous week Bachetti talked about how everyone is getting tougher and how hard you have to work to get to the front. I tend to agree as driver’s will also pick up their game as competition picks up theirs. It certainly makes for great racing action.

The Auto Plus Street Stock division car count wise has been less than the promotional partners have hoped for but have added money to the purse if the car count can reach fifteen. Other ideas are being tossed around about this and this week anyone that has not raced a Street Stock at A.M.P. season can come and try it out and driver will get free admission. Financially it just isn’t feasible to pay more without the support of the racers. The middle of our payout is as good or better than the other tracks in the area it just isn’t top heavy as we feel we need to get everyone back to the track week in and week out. Former track champion Doug Polhamus (KP1) picked up the win on opening night and then three weeks in a row it has been (89Jr.) Damon Decker the senior at the nearby Afton High School picking up the Trophy Guy’s hardware in the Mirabito Energy Products victory lane. No question that the fourth generation driver is hooked up right now. A big congratulations go out this week to the (01) car of David Cronk who after a few years captured his first career Street Stock feature win. He previous win was years ago in the Figure 8 division. Job well done Sir!

In the Chambers & O’Hara Empire Sports Trucks a four cylinder division it has been the (1) Bob Crandall finding victory lane opening night. Then week two saw Bristol, Connecticut driver Trey Palmer (12) parked his truck in victory lane. Week three and four it was the (00) of Ralph Cuozzo picking up the victories. Trey Palmer got back in victory lane this past week to become the second two time winner of this division. A little change came this past week for the Trucks as they will be running five lap heats and a twelve lap feature due to car count instead of the option of just features only. The promotional pair will also be seriously looking at the Street Stock division for future changes there if need be. The pair didn’t think that was going to be an issue but adjustments as they have learned are part of the promotional business. They are trying this week that if you have not ran a Street Stock this season at A.M.P. The driver will get free admission, so come on out and give it a try you may be pleasantly surprised at the ultra fast wide race track you have to work with weekly. Also above it said 15 for higher pay for Street Stock well scratch that we will do it for 12. Wow!

Since the start of the season the pair have addressed long lines at the concessions to where that have been fixed and as new problems arise they try to find a solution for it. The Joey Coulter’s Kids Club and C.A.R.S. Racing for a Cause has had a rough start. The bikes for a lucky youngster has went off as planned but had to do it different than planned due to absenteeism. That we believed will be alleviated this coming week with a much more responsible person in charge and more activities for the children. Also the video taping problem from same problem as Kid’s Club we believed is now fixed.

The track prep under the direction of Ronnie Ford and his crew have been getting high praise from competitors and fans alike. One little nagging hole in turn one will be getting fixed also as Ronnie’s brother Mike has equipment there now needed for the repair as he is a master of heavy equipment use. One of the biggest hits of the early season has been something we are proud of is the expediting of the nightly race program in general. Other than the night the Capital Region Sprint Series (CRSA) were in for their first of three visits the shows have been done before 10pm. That night it was done at 10:32pm meeting their goal of a fast paced show. Two weeks ago Friday with a thirty minute rain delay the final checkered flag flew at 9:54pm, and this past week at 9:55pm. The Modified division which runs third weekly have had the winner in victory lane before 9:15pm.

A look ahead to the very busy month of June awaits fans and competitors here at A.M.P. The entire month is full with great sponsors up in the VIP Tower and fan appreciation nights for the other four divisions as the Modified division has had theirs already. This past week will be fan appreciation for the Open Sportsman and the Trucks. The Crates and Street Stocks will be held this coming week. Then we get into mid-season championships for a couple of weeks with three on one week and two the other. The fine folks from the New York State Stock Car Association (NYSSCA) will be having their safety awards on Friday June 23. I urge all folks from track personnel to all in the pits to be a member of this great organization. The final Friday of the month will be a return for the CRSA 305 Sprint Cars and I believe like the first time they will bring a full field to the track.

The biggy of the month and the first of two mid-week specials for the promotional team will be held on Wednesday June 21 with Thursday the 22nd used as a rain date. It will be the first of two appearances of the Bob Hilbert Sportswear Halmar International Fueled by VP North Series of the Short Track Super Series. It is dubbed the Afton Action 50 paying five grand to win. The Crate Sportsman will be on the card in a one grand to win and a American Racer Cup Challenge Series race. The event will be a quick paced two division show with plenty of traveling stars in both divisions taking part in this huge event. All this for the generous price for adults at just $20.00 so bring a friend or two to enjoy this huge event.

Please support the folks that support auto racing every chance you get and please get out and support your local race track wherever that may be. If you have visited us before thank you for that and if you haven’t please take the time and give us a chance and let us show you what we have to offer and bring a friend. Thank you all for reading.