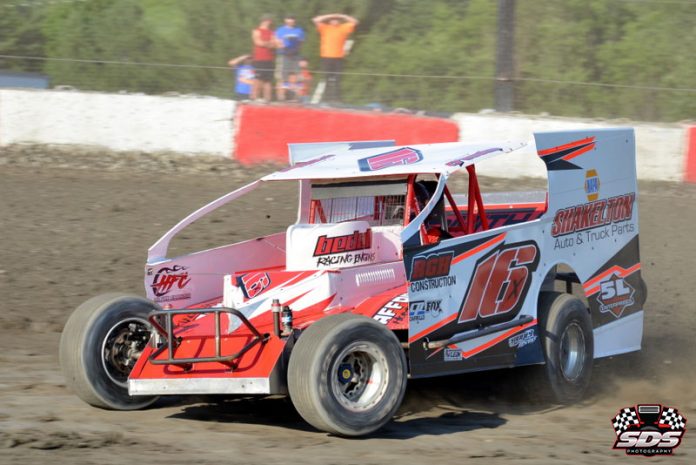 AFTON, NY – After his normal Friday night track was rained out Danny Creeden had in his mind not to race on Friday night. But crewman Dennis Dietrich kept after the Wurtsboro, NY driver that four hours before race time the decision was made to go to Afton Motorsports Park and race.

That was the correct decision as Creeden came from 15th place starting spot to grab the lead from Mike Trautschold with an inside turn four pass coming down for the two laps to go signal. Creeden in for the very popular win over Trautschold, Paul Jensen, Kurt Decker, and Mitch Gibbs.

Brandon Kuhn of South New Berlin, NY after a couple weeks of bad luck got the monkey off of his back with a Mid Season Championship feature win in the Open Sportsman division. Kuhn took the lead with five laps to go from Lucas Heintz and held him off for the win, Butch Klinger, Claude Hutchings, Jr. and Travis Smith completed the top five.

After winning on opening night Matt Brewer of Hallstead, PA has been in a slump. Well Matt broke out of the slump with a Mid Season Championship feature win in the Crate Sportsman division. Matt took the lead on lap four of the 20 lap contest from Matt Cole and led the rest of the race to win. Cody Clark, Harold Humphrey, first time visitor Corey Cormier, and Cole rounded out the top five.

Damon Decker of Afton, NY continued his impressive season as he won the 20 lap Street Stock feature, his fourth win of the year at Afton. Decker took the lead on lap five from Dustin Harris and led the rest of the event to claim the win over Harris, Doug Polhamus, Matt Bowman, and Dave Cronk.

Roberts took the lead on a lap two restart while Trautschold returned the favor with a pass for the lead on lap three.

Veteran Paul Jensen moved into second on lap four and immediately applied pressure on Trautschold for the lead with Roberts, Decker, and Sheeley racing for positions three, four, and five.

With good racing taking place within the top five positions, the racing action behind them was just simply, amazing with three and sometimes four wide racing going on as all of the heavy hitters were trying to work their way to the front.

At the halfway point Trautschold still held a commanding lead as the yellow came out. Jensen, Roberts, Decker, Alex Tonkin, Gibbs, Sheeley, Bachetti, Ken Titus, Creeden, and Smith were the top ten at this point.

On lap 18 the most serious incident of the race happened as the great run of Roberts ended entering turn one as the right front spindle broke sending him into the outside concrete block wall, Tonkin and Alan Barker were also involved.

On the restart Trautschold still held the lead over Jensen, Decker, Bachetti, and Creeden.

Bachetti and Creeden were like a tag team with Andy working the extreme top groove and Danny using the bottom groove as they entered third and fourth with ten laps to go.

Bachetti moved into second lap 23 and set sail after Trautschold who had a half a straightaway advantage. Creeden meanwhile moved into third on lap 24 and a three car battle was setting up for the win.

With five laps to go all three cars were now under a blanket with three different grooves being used as Trautschold was in the center with Bachetti up high and Creeden down low.

Coming down to complete lap 26 it was three wide for the lead for just a second as the right rear tire of Bachetti went flat due to earlier contact with the outside concrete block wall on the homestretch. The yellow lights flashed on and Bachetti pitted for a new right reart tire and returned to the race.

Up front it was now a two car race for the win with Trautschold holding the lead for lap 27. Entering turn three coming around to complete lap 28 Creeden was able to get under Trautschold and exiting turn four Creeden had the lead for good.

Creeden in for the win over Trautschold, Jensen, Decker, and Gibbs.

In a joyous victory lane Creeden commented on his day and win. ” We weren’t coming here, but Dennis kept bugging me and bugging me until I said yes we’re coming at 3 pm today. I’ve wanted to run here all year because I like the track, but Accord is so close to home that we go there but next year, who knows we might come here. Just look at the job Ronnie ( Ford ) and Leon ( Andrus ) have done here, the track is smooth with great bite, and we are done at 9pm. ”

Top five running order would stay the same until lap nine when Deckleman trying to grab the lead clipped an inside track marking uke tire exiting turn four and spun out to bring the yellow out. On the restart Hart slowed to bring out another yellow and this shuffled the top five with it now reading Heintz, Pope, Rosa, Dennis Clapperton, and Aaron Shelton.

A significant shuffle in the running order took place on lap 11 as exiting turn four Pope got out of shape and almost spun out in front of the field. He made a great save but when he got the car straightened back out Clapperton had no place to and piled into Pope to bring out the yellow.

On the single file restart Rosa who was now second got shoved into a inside track marking uke tire by Shelton bringing it out on to the racing surface to bring out another yellow, both participants were sent to the rear.

On the restart Heintz had Brandon Kuhn hot on his back bumper and the two drivers took off to settle who was going to win the Mid Season Championship.

Heintz who had been running a flawless race made one mistake and it came exiting turn four coming down to complete lap 15. Heintz drifted high on the race track and that is all Kuhn needed as he darted underneath to grab the lead.

Kuhn in for the win over Heintz, Butch Klinger, Claude Hutchings, Jr., and Travis Smith.

Qualifying races were captured by Heintz, Pope, and Clapperton.

Brewer quickly moved into second on lap two and set sail after Cole for the lead. Meanwhile Humphrey moved into third on lap three and he was followed by Cody Clark who took fourth.

A pair of Matt’s battled for the lead with Brewer getting under Cole exiting turn four to complete lap four to get the lead.

On a lap eight restart Brewer kept his lead while Clark went from fourth to second, Humphrey moved into third on lap 12.

Brewer impressively held a big advantage to maintain his lead while Clark kept Humphrey at bay for second. First time visitor Corey Cormier got past Cole for fifth with five laps to go.

Brewer in for the Mid Season Championship win over Clark, Humphrey, Cormier, and Cole.

Decker who will be graduating from Afton High School this upcoming Friday night moved into second on lap two and immediately pressured Harris for the lead. Harris did an outstanding job holding off Decker for the lead until a lap five double file restart.

Decker shot into the lead on the lap five double file restart and essentially the race was over. Decker in for the win over Harris, Polhamus, Bowman, and Cronk.

Harris won the heat race earlier in the racing program.

Jeff Young and Bob Crandall led the Four Cylinder Truck 12 lap feature to green. Ralph Cuozzo rocketed from his fourth place starting spot to grab the lead before one lap was complete.

Cuozzo made it a clean sweep of the night as he won the heat race to start the evening off.

NEW ERA NOTES; the fine people of Auto Plus sponsored the nights racing program which was quickly run off due to cold tempatures and damp conditions with Modified feature done at 9:02 Friday night and entire program over at 9:42 pm. Track management decided for the Mid Season Championship races to award championship points instead of adding feature laps and increased admission. Nine new cars made to AMP on Friday night with several new weekly Modified racers joining the field. Skip Pickwick picked up the ride in the Crate Sportsman of Rob Loucks for the Open Sportsman division. New Modified regular Greg Tatich broke in hot laps ending his night. Due to a pit altercation after the Open Sportsman feature Bill Deckleman was suspended for a rule violation for the next 2 weeks of racing. This upcoming Friday is Mid Season Championship Night presented by NYSSCA for Modifieds and Street Stocks with Championship Points being offered, NYSSCA will be presenting several cash bonus awards in all divisions to racers who are members.

Coming up this Wednesday night June 21st is the first big race of the year at Afton Motorsports Park. As the North Region of the Short Track Super Series comes to town in a 50 lap Modified feature along with a 25 lap American Racer Cup Crate Sportsman feature and a 20 lap Front Wheel Drive Four Cylinder Stock feature. Gates open at 3 pm, with a drivers meeting at 5:45 pm, hot laps are at 6pm, with first heat starting at 7pm. In case of inclement weather Thursday night June 22nd is the raindate. Track regulars who show up and attempt to qualify will receive 25 show points for their respective division . Grandstand admission is $22 with Pit admission being $35.

Afton Motorsports Park is fast, fun, and furious…check us out!