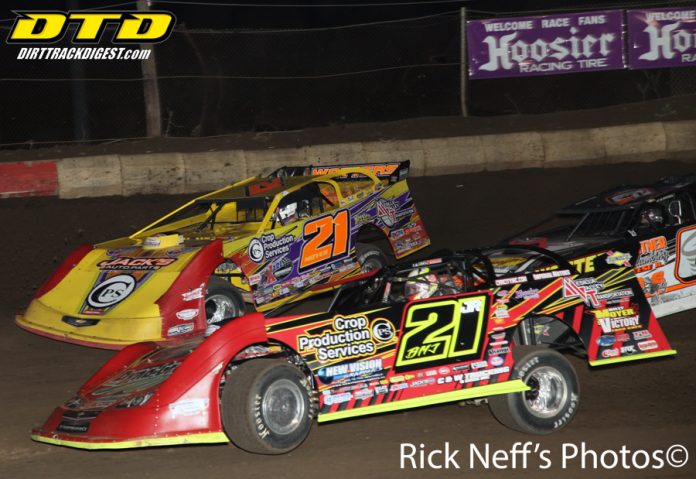 The Batesville, Ark., Hall of Famer’s car was pushing in the corners while first Shannon Babb and the Pierce challenged him, but Moyer pulled away to win by 2.2 seconds for his first victory at the quarter-mile fairgrounds oval.

Moyer, a six-time Summernationals champion threatening to run the full tour for the firs time in many years, solidified his series points lead with the $5,000 payday in beating Pierce, the two-time and reigning series champ from Oakwood, Ill.

Pierce, who rallied from his 18th starting spot in a backup car after being snakebitten in preliminaries, couldn’t maintain his rally after a lap-30 caution with his right-rear tire losing air.

Babb, of Moweaqua, Ill., ended up third with Billy Moyer Jr., the winner’s son, and polesitter Brent Larson of Lake Elmo, Minn., who led the first 10 laps, rounding out the top five.

The feature was slowed four times, including for a red flag on the ninth lap when Blake Spencer’s car got upside down on the backstretch in the St. Augustine, Fla., driver’s first series feature. Emergency crews quickly attended to him and he climbed out unhurt.

The first yellow flew on the third lap with Jason Perry and Rick Salter tangling and spinning between turns one and two. A lap-seven caution appeared when Jason Feger’s engine flamed up as he slowed and rolled to the infield. He climbed out with no harm as crews extinguised the fire.

The final caution flew for on lap 30 for eighth-running Rob Mayea’s turn-three incident that ended with smoke wafting from under the hood.