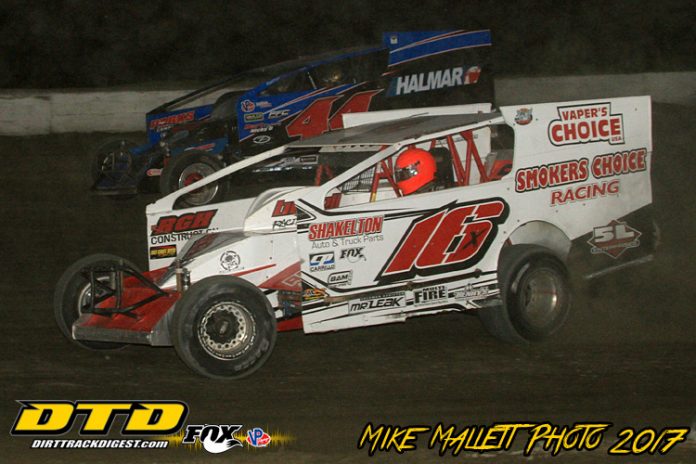 Picking the worst number in the redraw – 12 – Friesen shot through the field in the outside lane and drove to the win in the 50-lap Bob Hilbert Sportswear Short Track Super Series (STSS) Fueled By VP big-block/small-block Modified event, Round No. 3 of the Halmar International North Region.

The Sprakers, N.Y., driver received $5,100 for his efforts. The win was Friesen’s STSS-leading ninth victory and second of his career with the series at Afton, previously winning at the fairgrounds facility in July 2015.

There have been three different winners in as many STSS North events contested this season. Friesen does have a 2017 STSS Velocita-USA South Region score to his credit in April at Bridgeport (N.J.) Speedway.

“The top (lane) was good,” Friesen said after drawing a rise from the grandstands in Victory Lane. “It just took a few laps to clean it off. Once you got rolling up there, you could make ground.”

When the 50-lap main event received the green flag, outside pole starter Nick Nye – a series and Afton regular – shot into the lead. Groton, N.Y.’s Nye authored an outstanding drive to lead the opening 17 laps before Danny Creeden, who started fourth, used the outside groove to take command.

As Creeden was pressuring Nye, Friesen had been simultaneously picking off car after car on the topside of the speedway in his Halmar International-backed No. 44. At lap 22, Friesen sat third behind Creeden, who was negotiating lapped traffic, and Nye.

At the halfway mark, Friesen had moved into second, but was a straightaway behind the high-flying Creeden, who maintained a comfortable edge until a yellow on lap 35.

During a pair of consecutive restarts, Creeden held an edge on Friesen.

However, using his high-side momentum, Friesen forged ahead on lap 37.

“I wasn’t sure if I would get by Danny,” Friesen said. “He’s fast at these places and he definitely had a good car. The restarts helped group us back up.”

With time winding down, 17th-starter Ryan Godown of Ringoes, N.J., began to make his presence felt. Godown, who won both STSS races at Afton a year ago, arrived in third place at lap 39. Five laps later, he put the Searock Fabrication-backed No. 26 into second.

A final caution on lap 45 set up a five-lap dash to the finish. Friesen was able to keep Godown at bay for the victory.

Godown, after surviving early scrapes in traffic, was a happy runner-up finisher.

“The track was tough in the heat races,” Godown said. “Putting that water down at intermission brought it back. The place was racy, but it was wild there in the back. I spit the middle a few times, people were low, high: it was exciting.

“To come out of here with two wins and a second in my last three races, I can’t complain.”

Triangle, N.Y.’s Jeremy Smith continued to impress in his first full season chasing STSS points, driving his self-owned No. 46 to third at the finish. Creeden ultimately was shuffled to fourth and Ryan Jordan of Dryden, N.Y., placed a steady fifth, his second consecutive top-five finish on the series.

Two-time series champion and current Afton point leader Andy Bachetti of Sheffield, Mass., salvaged a sixth-place finish. Bachetti needed a provisional to get in the main event, starting 25th, and survived an early spin to charged back through the field.

Completing the top-10, respectively, were Jerry Higbie of Newburgh, N.Y., in another solid effort with the United Pump & Tank No. 48; Billy Decker of nearby Sidney, N.Y., up from 23rd in the Smith Racing No. 91; track regular Brett Tonkin of Carbondale, Pa., who started 19th; and fellow Afton mainstay Ken Titus of Kirkwood, N.Y., in a steady performance.

Cody Clark of Salisbury Center, N.Y., dominated the 25-lap Crate 602 Sportsman headliner, picking up a $1,000 payday. Clark held a lead of more than a straightaway for much of the event. Chasing Clark across the line were Harold Humphrey, Matt Brewer, Tim French and Kyle Rohner.

Next up for the STSS is the ‘Battle of the Bullring 5’ at Accord Speedway, a 50-lap, $5,000-to-win clash on the Ulster County quarter-mile, Round No. 4 of the Halmar International North Region, joined by the STSS Sportsman ($1,000 to win) and Slingshots.

AFTON AFTERTHOUGHTS: The ‘Afton Action 50’ marked the first midweek event under the new promotional team led by Ronnie Ford and Leon Andrus. The program spun off quickly, with the STSS Modified feature completed by 9:15 p.m. and the remainder of the show in the books by 10 p.m. on a weeknight….

An impressive 16 of the top-20 in STSS Halmar North Region points were on hand for the event, with 38 Modifieds signing in for action….

The strong run by Nick Nye in the STSS event was short-circuited by a power steering pump failure, causing Nye to retire from the event with only 11 laps remaining….

A very healthy midweek crowd turned out for the first of two STSS visits to Afton Motorsports Park this season. The series returns for American Racer Cup Weekend/Short Track SuperNationals 10 in October….

The Ricci family was out in full force, with Rich Ricci Jr. and Allison Ricci in the Modifieds plus Rich Ricci III in the Crate 602 Sportsman division….

Tough break for series traveler Brian Krummel, who was sidelined by engine woes while in a qualified spot during heat-race action with the Zubi’s Racing No. 17Z…. 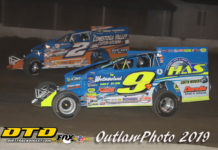 Modified Double-Header Weekend at Fonda, DTD TV is there for Both 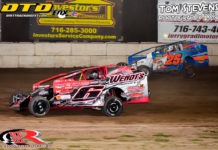