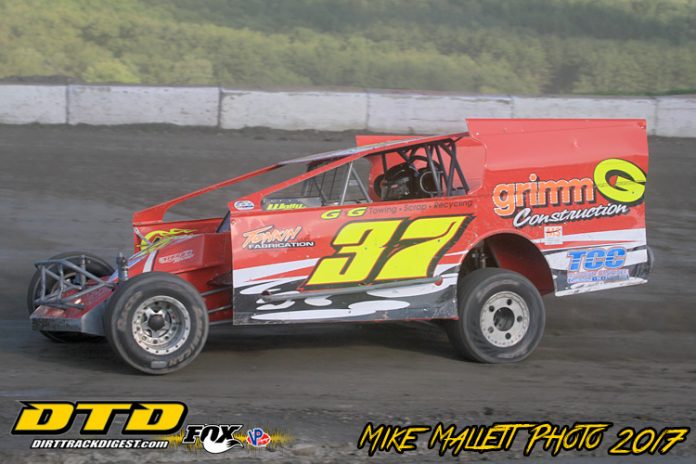 AFTON, NY – After a four week hiatus due to three weeks of rainouts and a week off for the Afton Fair. The Afton Motorsports Park returned to action on Friday night with Alex Tonkin outdueling his brother, Brett to win the Mid Season Championship feature for the Modifieds. Dennis Clapperton captured his first career feature win by winning the Open Sportsman feature with Allan Hodge winning the Crate Sportsman feature. Recent Afton High School graduate Damon Decker continued his great season as he captured the Street Stock Mid Season Championship and Bob Crandall won the Four Cylinder Truck feature.

Eddie Newell and Matt Roberts brought the Modified field to green to start their Mid Season Championship 30 lap feature and with three caution flag periods taking place before a lap was scored, track officials called for a single file start.

Babicek moved into second on lap three and the backslide of Newell continued as Alex Tonkin dropped him to fourth on lap four and Brett Tonkin passed Newell for fourth on lap five.

The early big move took place on lap seven as Andy Bachetti moved from 12th to sixth with a four wide pass on the backstraight among the highlites. As soon as Bachetti made this outstanding move, smoke started to puff from the engine.


Alex Tonkin was leading the Tonkin Family charge to the front with his brother Brett right on his back bumper. The Tonkins’ moved into second and third on lap eight with Alex now breaking away from Brett as he set sail after leader Roberts.

Up front Roberts who was looking for his first career Modified win, lost the lead to Alex Tonkin who was glued to the bottom of the track on lap 15. The great run of Roberts ended one lap later as he rolled to a stop in turn two to bring out the yellow.

On the restart the Tonkins’ pulled away from Bachetti who started to see power loss from the oil smoke puffing from the engine. Following a lap 17 restart the power was even less in the Bachetti car as he was passed for third by Decker. But Bachetti kept driving hard and repassed Decker for third on lap 19 and he brought Babicek along with him as he moved into fourth. Finally the motor in the Bachetti car gave up as he stopped to bring out the yellow on lap 20 ending his night.

On the restart with ten laps to go Alex Tonkin pulled out to a comfortable lead over his brother Brett. Meanwhile Decker hopped up to the extreme high side to grab third back from Babicek on lap 21.

Alex Tonkin in for his second career Modified feature win over his brother Brett, Decker, Babicek, and Ken Titus rounded out the top five.

The 20 lap Open Sportsman feature was the last feature on the racing program and due to the earlier rain the fog started to roll in as the feature went to green.

Polesitter Don Hart, Jr. jumped out to the lead over Craig Pope, Dennis Clapperton, Craig Pritchard, and Dave Rosa. Butch Klinger was making his presence felt as he moved into fifth on lap three.

Following a lap four restart Clapperton moved into second behind Hart with Pope, Rosa, and now Aaron Shelton moving past Klinger into fifth.

Clapperton moved into the lead with an inside turn four pass coming down to complete lap seven and at the same time Klinger moved back into fifth. Once in front Clapperton opened up a big lead as he was going to take control of the feature.

With Clapperton nearly a full straightaway ahead all eyes were focused on Klinger who moved to the extreme outside groove and he started to move quickly to the front. Klinger took fourth from Rosa on lap 11, third from Pope on the next lap, and second from Hart with five laps to go.

The huge lead of Clapperton was erased as the caution lights came on for the stopped car of Skip Pickwick with two laps to go. During the yellow Klinger tried to rattle Clapperton as he pulled up alongside him, to try and intimidate him.

The Klinger intimidation didn’t work one bit as when the green lights came back on Clapperton shot quickly out to a five car length lead.

At the checkers Clapperton in for his first career feature win over Klinger, Pope, a hard charging Travis Smith, and Hart.

Qualifying heat races were won by Hart, Clapperton, and Pope.

Craig Monroe and Duane Knapp brought the 20 lap Crate Sportsman field to green. Knapp would jump out to the lead over Monroe, Tim French II, Tyler Ward, and Allan Hodge.
Knapp looking for his first career feature win opened up a big lead with Ward moving into second on lap four and Hodge who moved into third on lap five.

The big mover during the first five laps was 15th place starter Cody Clark. Clark the current track point leader moved into fifth by lap five, but it wasn’t without controversy. On lap one Clark ran over the front end of Colby Hendrickson to gain a position and track officials deemed that Clarks’ action was driving too aggressive and a one spot penalty would be given to Clark at the next caution period.

Knapp continued to lead but his big advantage was getting smaller each passing lap as the trio of Ward, Hodge, and Clark were closing in. As the lead pack entered lap traffic on lap 10 Knapp continued to lead but Ward got trapped behind a lap car and it cost him second with Clark going from fourth to second. Ward got blocked by the same lap car again on the next lap and it cost him third to Hodge.

Clark clearly the fastest car in the field motored under Knapp to gain the lead on 13. With the drivers not knowing about the upcoming one spot penalty to Clark for rough driving. Hodge made a key pass as he got past Knapp for second on lap 14.

With five laps to go the yellow came out for Monroe who slid into the mini pond of water on the inside of the homestraight. During the yellow period Clark was given his one spot penalty for rough driving on the opening lap, this gave the lead to Hodge.

The final five laps youngster Hodge drove like a veteran as he made his car just wide enough to keep Clark behind him. At the checkers Hodge in for his second win of the year over Clark, Knapp, Ward, and Harold Humphrey who nipped Matt Cole at the line for fifth.

Harris running in the extreme top groove got around Bowman for the lead on lap three and at the same time Decker moved from fourth to second in the bottom groove.

Harris and Decker put on a great show for the lead by racing in two distinct grooves. Decker was inching closer each passing lap to Harris and finally with the half way signal being given Decker got enough of a bite exiting turn four to grab the lead.

Decker in for his fifth win of the year over Harris, Polhamus, Bowman, and Cronk.
Harris won the qualifying event ran earlier in the evening.

Crandall moved into second on lap two and set sail after Cuozzo for the lead, Christensen and Young held their own private battle for third until they made contact with each other and both ended up in the mini pond on the homestraight.

There were two different restarts on lap four and on the second one Crandall was able to take the lead from Cuozzo with Lanfair moving into third and he was followed by Brandon Clapperton and Bill Cooper.

Lanfairs’ great run came to an end with a broken front end on lap five and on the final double file restart of the race Crandall left no doubt who was going to win the race. Crandall jumped out to a big lead to lead the remainder of the race to grab his second win of the year over Cuozzo, Clapperton, Young, and Cooper.

Crandall made it a clean sweep of the night as he won the qualifying race earlier in the evening.

NEW ERA NOTES; Mirabito Energy Products and Nu – Look Collision sponsored the nights racing, kiddie rides were held until a thunder shower hit the race track. Track co – promoters Ron Ford and Leon Andrus would like to thank the 49 racing teams who came out and helped run the track in after a pop up thunderstorm hit the track at 5:55 Friday evening and lasted to 6:25pm. Without their help the show more than likely would not have been completed due to fog that rolled in during the last feature of the program. The show started at 8:11 pm and was completed at 10:49 pm Friday evening. During intermission drivers went through the stands to collect funds for track co – promoter Ron Ford who lost his business, Pit Stop Auto to fire two weeks ago, a bake sale was also held with close to $1,000 being raised. Championship points were awarded to the Modifieds and Street Stocks who competed in their Mid Season Championship races. Jeff Bronson blew the engine in his Modified in the heat race drove the Randy Gates Sportsman in the Modified feature. Due to weather issues and the Afton Fair this was the first race at the track in 30 days. Afton Motorsports Park invites all competitors and fans of the Thunder Mountain Speedway to join us next Friday night as Thunder Mountain is off next week.
This Friday night Magic 101.7 along with the New York State Stock Car Association presents a complete show of Modifieds, Open Sportsman, Crate Sportsman, Street Stocks, and Four Cylinder Trucks. All gates open at 4 pm, Hot laps begin at 6:15 pm, with the first heat starting at 7 pm sharp. Adult Admission is $12 with Senior Citizens age 62 and up admitted for $10, youth aged 9 to 14 are $5, and children under the age of 8 are admitted free with a paid adult admission.

Afton Motorsports Park is fast, fun, and furious….come check us out.