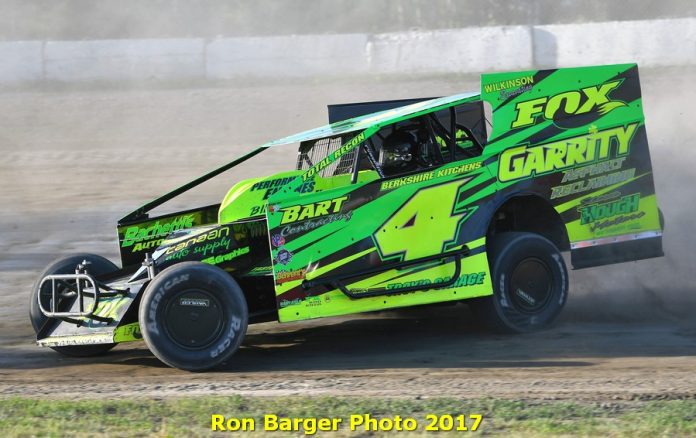 Afton, NY –  With one month remaining in the point season at the Afton Motorsports Park, the point leaders in the Modifieds, Open Sportsman, Crate Sportsman, Four Cylinder Trucks decided that Friday night was an excellent night to widen their leads in the point standings.

Division point leaders Andy Bachetti in the Modifieds, Claude Hutchings, Jr. in the Open Sportsman, Damon Decker in the Street Stocks, and Ralph Cuozzo in the Four Cylinder Trucks all won their respective features. All four drivers opened up bigger leads in the point standings for their respective division in the quest for the track championship.

The 30 lap Modified feature had a Fulton Outlaw 200 Guaranteed Starting Spot on the line which had Alan Barker and Mitch Gibbs lead the field to green. Gibbs debuting a brand new Bicknell 2017 x chassis jumped out to the lead over Barker, Ken Titus, Nick Nye, and Paul Jensen.

The top five stayed the same until lap five when one of the best racing moves you will witnessed was pulled off by tenth place starter Andy Bachetti. Bachetti was racing in tenth entering turn three in the extreme top groove, he diamonded the corner off and somehow the red sea parted on the race track. Bachetti rocketed across the race track and into the bottom groove exiting turn four and he came across the line in fifth.


Up front Gibbs had his new car really running and opened up a full straightawya lead over Barker with Titus in third and Bachetti who moved past Nye for fourth on lap six.

The top three cars with distance between them all were now in heavy lap traffic on lap ten. Bachetti made up the track difference and took third from Titus on lap 11 and was closing in on Barker when the caution came out on lap 13 to bunch the field up.

The double file restart was an interesting one indeed as what everyone expected to take place didn’t happen as a surprise result occurred. Gibbs kept the lead, which everyone figured he would. But the shocker was Rusty Smith rocketed from fifth to second with Bachetti, Barker, and Brett Tonkin now rounding out the top five.

You could tell that Smith’s charge woke up Bachetti, even if Andy didn’t need any waking up. Bachetti moved back to the extreme top groove in turns one and two to claim second from Smith at the halfway point. Barker, Tonkin and Paul Jensen were now in a tussle for positions four through six.

Gibbs was looking strong in the lead as it seemed that Bachetti didn’t have anything to catch him. This was proved after a lap 19 restart when Gibbs pulled away to open up a six car length advantage over Bachetti who had to worry about Smith who was still nipping at his back bumper. Barker, Tonkin, Jensen, and Nye were all racing for fourth at the time.

An extended caution period on lap 22 was the downfall for Gibbs as he admitted later after the feature that maybe he didn’t keep enough heat in his tires. As on the restart Gibbs didn’t pull away to a big lead like before as Bachetti got underneath Gibbs in turns one and two. Gibbs was able to keep the lead with a strong run down the backstraight but pushed up in turns three and four and that was all Bachetti needed. Exiting turn four to complete lap 23 Bachetti got the opening he needed and raced through the opening to grab the lead for good.

Once in front Bachetti opened up a sizeable lead over Gibbs who now had to contend with Smith for second. Tonkin, Barker, Nye, and Jensen all continued to wage an excellent battle for positions four through seven.

At the checkers Bachetti in for the win over Gibbs, Smith, Barker, and Tonkin. After the race Bachetti accepted the Fulton Outlaw 200 Guaranteed Starting Spot, but the next morning reports that he was not going to take it circulated. As of press time it could not be 100 % confirmed whether Bachetti was taking the spot or not. If he does not take the spot it would go to second place finisher Gibbs.

Qualifying heat races were won by Nye, Barker, and Jensen.

Skip Pickwick and Craig Pritchard brought the 20 lap Open Sportsman feature to green but the racing would be halted almost immediately as Don Hart, Jr. had the throttle stick entering turn one.

Hart hit the outside wall twice before the car came to a rest in turn two with heavy damage. Hart was checked out by the Afton Emergency Squad EMT’s and taken back to his trailer where he was released.

When the race resumed Pickwick grabbed the lead over Pritchard, Dave Rosa, Claude Hutchings, Jr., and Dwayne Jackson. Pritchard raced past Pickwick to grab the lead on lap two with Rosa moving into second on lap three.

On a lap four double file restart Rosa was able to outpower Pritchard to grab the lead with Hutchings, Butch Klinger, and Tyler Hart now completing the top five.

With the remainder of the race going caution free it was a two car battle for the feature win. Rosa holding his groove on the bottom with ease as Hutchings was trying every little move in the book to sneak under Rosa, but Rosa held his ground.

We have seen this performance by Hutchings before this year at Afton Motorsports Park where he hugs the bottom behind the leader and then all of the sudden with a few laps to go he jumps to the outside to take the lead.

Rosa who was running a great race made one mistake entering turn three coming around for the white flag. Rosa missed his mark entering the turn and slid up the race track and that was all Hutchings needed as he bolted through the opening to grab the lead with one lap to go.

Hutchings in for the win over a very disappointed Rosa with Klinger, Tyler Hart, and Dennis Clapperton completing the top five.

Digsby who has suffered through a tough seaosn of inconsistent car setups found a set up on this night he liked. He grabbed the lead from French on lap three and once in front he opened up a big lead.

Loucks found his way past French for second on lap five with Harold Humphrey now entering the fray as he took fifth on lap six from Cole.

With a caution free feature taking place Digsby got into lap traffic and handled it with ease and kept his lead over Loucks, French, Humphrey and Tyler Ward at the half way point.

With five laps to go Humphrey and Ward both got past French for third and fourth respectively. Matt Brewer now entered the battle for fifth as he got past French on lap 16 for the position.

At the checkers Digsby in for the popular win over Loucks, Humphrey, Ward, and Brewer.
French, Cody Clark, and Loucks captured the qualifying heat races.

Harris moved into second on lap two and he had Polhamus right on his back bumper as he took third form his teammate Bowman.

Behind the top three the racing was intense as Shane Wolf, Jr., Earl Zimmer, and Damon Decker was all racing their way up through the field as they were in positons five, six, and seven.

With the lead pack in heavy lap traffic many twists and turns of the running order took place. Cronk still held the lead over Harris, Polhamus, Fowlston and Decker at the halfway point.

The heavy lap traffic started to come into the play as Wolf took advantage of a lap car holding up Fowlston and Decker to go from sixth to fourth on lap 13.

The first yellow of the feature came out on lap 14 with second place runner Harris getting tangled up with a lap car and also Wolf spun into the mix.

When the race resumed Cronk still led over Polhamus, Decker, Fowlston, and Zimmer. Crank and Polhamus had the cars to beat and they were having their own private race for the lead.

Coming around for the two lap to go signal contact between the first two cars saw leader Cronk spinning out with Polhamus being sent to the rear of the field for the contact.

Decker inherited the lead with Zimmer, Fowlston, Wolf and Bowman completing the top five with two laps to go.

Decker who earlier in the race had to race over an inside track marking uke tire to avoid a spinning car brought his mangled car somehow in for the win over Zimmer, Wolf, Fowlston, and Bowman.

The top three of Cuozzo, Crandall, and Palmer pulled away to a big lead to settle the winner amongst themselves. Cuozzo opened up a big lead over Crandall who had to deal with Palmer for second.

Behind the top three the racing was good with Clapperton, Chapman, Jerry Lanfair and Pete Christensen all racing for positions four through seven.

Palmer running the outside line got past Crandall for second on lap seven and set sail after Cuozzo.
The big lead of Cuozzo was cut into by Palmer but he ran out of laps as Cuozzo in for the win over Palmer, Crandall,  Lanfair, and Christensen.

Crandall won the qualifying race earlier in the program.

NEW ERA NOTES; track co -promoters Ron Ford and Leon Andrus would like to say Thank You to John & Laura Wight and Cory Reed of the Fulton Speedway for awarding the Fulton Outlaw 200 Guaranteed Starting Spot to the Modified feature winner on the night. MAGIC 101.7 along with the New York State Stock Car Association sponsored the evenings racing. The top two finishers in each feature who were New York State Stock Car Association members before the racing program started received bonus money from the club. Alicia Trautschold sang the National Anthem before racing started on the evening. Leo Fotopoulous lost a serpentine belt off his engine during the heat race and could not find a replacement, which ended his night. Brandon Walters changed the entire rear end assembly in his Modified after the heat race. With over 15 Street Stocks in attendance the higher feature purse format was paid out and that will continue if 15 or more attend each race night. Races started at 7:06 and ended at 10:01.


For more information on the Afton Motorsports Park please log on to the World Wide Web at www.aftonmotorsportspark.com.

Afton Motorsports Park is fast, fun, and furious….come check us out!