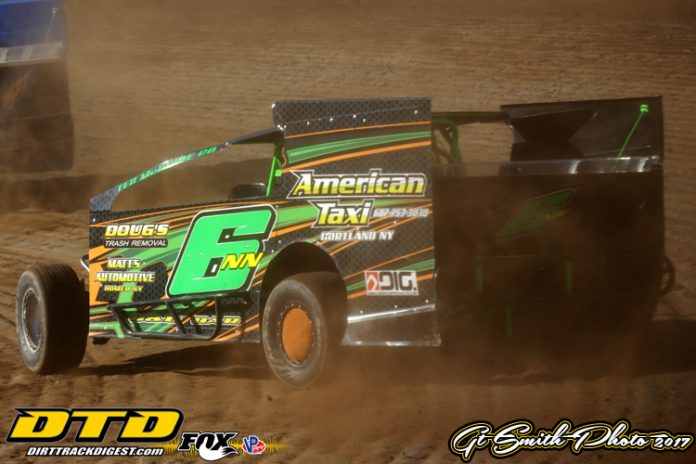 AFTON, NY – The final night of points, otherwise known as championship night brought the weekly racing curtain down for the 2017 racing season at the Afton Motorsports Park. The racers were greeted with an all new clay racing surface that was applied during the week in the corners by Mike Ford of ZMK Construction.

Nick Nye has been knocking on the door for a feature win all season long and tonight he put it all together in the Randy Metcalf owned car as he dominated the 30 lap Modified feature for his first win of the year. Nye took the lead on lap 10 from Paul Jensen and was never headed after that. Alan Barker, Jensen, track champion Andy Bachetti, and JR Hurlburt completed the top five.

Claude Hutchings, Jr. won the 20 lap Open Sportsman feature to win the track championship. He took the lead on lap 17 from Don Hart, Jr. and went on to the win over Hart, Craig Pope, Aaron Shelton, and Travis Smith.

Allan Hodge won the 20 lap Crate Sportsman feature, Hodge inherited the lead when leader Cody Clark was penalized one spot for rough riding during a lap 13 yellow flag period. Hodge and Clark battled tooth and nail over the final seven laps with Hodge taking the win by a couple of feet over track champion Clark, Matt Cole, AJ Digsby, and Tim French II rounded out the top five.


Just signing in to race Ralph Cuozzo won the Four Cylinder Truck track championship. Ralph then he went out and won the 12 lap feature as he took the lead on lap five from Bob Crandall, Brandon Clapperton, Pete Christensen, and Jeff Young completed the top five.
Jeff Sheeley and Paul Jensen brought the 30 lap Modified feature field to green with Jensen using a new motor under the hood grabbing the lead over Sheeley, Charlie Hendrickson, Jr., JR Hurlburt, and Jim Becker.

Nick Nye took a liking to the all new clay surface in the corners and he immediately jumped up to the extreme high groove to move into fifth on lap two from his eighth place starting spot, Nye moved into fourth on lap three.

A grinding homestretch crash on lap four saw the fortunes of many drivers altered for the remainder of the evening. Five cars were stopped blocking the track after the dust settled, but another five cars who made it through the melee also had damage. Only two ( Jeff Sheeley and Kyle Weiss ) of the ten cars involved were unable to continue, there were no driver injuries.

On the restart Jensen opened up a big lead over Hurlburt, Nye, Mitch Gibbs, and Alan Barker. Nye quickly disposed Hurlburt for second and set his sights on Jensen for the lead. Meanwhile Gibbs, Barker, and Andy Bachetti were in a crowd pleasing race for positions four, five, and six.

After a lap nine restart Jensen and Nye raced side by side for the lead and entering turn three coming around to complete lap ten. Nye using the extreme high groove grabbed the lead and opened up a big lead.

With the rest of the race going non stop Nye left little doubt who was going to win as his lead kept getting bigger and bigger. Meanwhile behind him Jensen and Hurlburt were now in an all out battle for second with Barker breathing down their necks as he was in fourth, Gibbs and Bachetti raced for fifth.

With five laps to go in the race Nye entered heavy lap traffic, but it didn’t phase him one bit and he raced through it cleanly. But the lap traffic did cause problems for the remainder of the top six as positions changed on every lap.

Nye in for the dominating win with Barker inching past Jensen for second at the line, Bachetti sneaked past Hurlburt for fourth and JR held off Gibbs for fifth.

Qualifying races were won by Jensen and Nye.

On a lap four restart Hart remained in the lead over Shelton, Craig Pope using the extreme high groove moved into third and he was followed by Andersen and Travis Smith.

Pope moved into second on lap six and tried to close in on Hart for the lead. But the crafty veteran, who has had a rough year kept his line consistent and even opened a bigger lead.
With Hart in the lead the second half of the feature became the Claude Hutchings, Jr. show and he showed why he was the track champion. Hutchings started 11th and took his time coming up through the field, and entered fifth on lap ten. Hutchings moved into fourth on a lap 11 restart, took third from Shelton on lap 13 with a nifty inside pass. Hutchings quickly got past Pope for second on lap 14 and settled in behind Hart for the lead.

After watching where Hart was racing and he knew he wasn’t going under Hart for the win. Hutchings found the new clay to his liking as he jumped to the outside groove and took the lead exiting turn four to complete lap 17.

Hutchings in for the win over Hart, Pope, Shelton, and Smith.

Qualifying heat races were captured by Andersen, Shelton, and Greenier.

Clark aggressively got past Cole for third on lap four and was immediately called for rough rding and a one spot penalty at the next yellow. Hodge also got past Cole for a position, thanks in part to the contact made by Clark.

Coons and Brewer checked out from the field and were setting up their own private race for the win. The veteran Coons and the youngster Brewer were racing cleanly as they entered lap traffic on lap 13.

Going into turn three coming around to complete lap 14 disaster struck the top two as the lap car of Craig Monroe spun in turn three. Coons and Brewer were left no place to go and piled into the disabled car of Monroe to bring out the caution.

Clark inherited the lead but due to the rough riding call earlier in the race, he was placed into second with Hodge now the leader. First time visitor Leo McGurrin was now third with Cole in fourth and AJ Digsby in fifth.

The last seven laps of the feature had more action than you could shake a stick at. As you didn’t know where to watch as there was racing action all throughout the field, with a majority of the attention on the race for the lead.

Hodge and Clark were racing side by side for the lead with two laps to go, at the same time McGurrin suffered a right rear flat ending his impressive run.

With the white flag waving Clark edged past Hodge to officially be scored as the leader of lap 19. Hodge fought right back to regain the lead going down the back straight and the duo was side by side entering turn three.

Coming down for the checker as they exited turn four the cars of Hodge and Clark made heavy contact racing for the lead. Both cars were nearly sideways, but both straightened them out with Hodge winning by almost two feet over Clark, Cole, Digsby, and Tim French II.

Qualifying races were won by Brewer, Coons, and Hendrickson.

Wolf quickly moved into second with his crate engined car while Decker got past Christ for fourth. Decker moved into third on lap eight, and took second from Wolf on lap 11.

Bowman was racing a very consistent line while Decker was trying to get under him for the lead as the top six runners could have a blanket tossed over them as they entered heavy lap traffic on lap 13.

Trying to go four wide in heavy lap traffic is not a good idea and that is what took place on lap 14 in turn one. As the yellow came out with Decker, Harris, Doug Polhamus all involved with two lap cars.

That incident shuffled the running order as now Bowman had to deal with Wolf once again for the lead with Christ in third, Ralph Cuozzo in fourth, and David Stalker in fifth.
When racing resumed and lap 15 was scored Bowman was holding off Wolf while Christ was third, Harris in fourth and Decker in fifth.

The final five laps saw Bowman have no trouble holding on to the lead and he went on to win over Wolf, Harris, Decker, and Christ.

Qualifying races were won by Decker and Wolf.

Jeff Young and Pete Christensen brought the 12 lap Four Cylinder Truck feature to green with Christensen taking the lead over Bob Crandall, Ralph Cuozzo, Jerry Lanfair, and Young.
Crandall, who a week earlier flipped his truck at another track worked all week and got it back together took the lead on lap two. Cuozzo was right on the back bumper of Crandall and took second at the same time. Brandon Clapperton wheeling the Skip Pickwick owned truck took fifth on lap three.

Cuozzo got the lead from Crandall on a lap five restart with Dustin Wilbur moving past Clapperton for fifth. Clapperton made a bold move to go from sixth to fourth on lap six just before the yellow came out. Clapperton continued his charge to the front as he moved into third on lap eight.

Despite a late race rash of yellows Cuozzo held off Crandall for the win over Clapperton, Christensen, and Young.

The qualifying race earlier in the program was won by Cuozzo.

NEW ERA NOTES; for the first time all season a dry week of weather allowed the track maintenance crew the proper time to apply clay to both ends of the speedway, the surface came up table top smooth and caught some drivers off guard. ZMK Construction and Wagner Lumber of Nineveh sponsored the nights racing with both companies enjoying themselves in the VIP Towers all evening long. All five drivers who claimed track championships on the night took matters in their own hand by finishing where they had to, which clinched the track championship. Several new drivers made their season debuts on the night with most of them getting set up for the upcoming Short Track Super Nationals X / American Racer Cup Weekend. 14 year old Blaine Klinger, a Slingshot graduate looking right at home in a Crate Sportsman with a ninth place finsh in only his second race. As usual a quickly run show even with five extra interviews with the track champions saw the final checker fall at 10:09 Friday night.

Afton Motorsports Park co – promoters Ron Ford and Leon Andrus would like to say Thank You to all of the racing teams and racing fans who made AMP their Friday night home this year. Many people said that they wouldn’t make it past July, but despite the awful weather, they did make it with hard work and a dedicated staff of volunteers and officials. The future looks bright at AMP with plans already being put into place for the 2018 racing season.

The fastest time for the Modifieds will receive a guranteed starting spot for the next night.
Saturday October 7th will see an American Racer Cup Modified and Street Stock Dash for the Track Champions. Also on the racing card will be the IMCA Modifieds, Street Stocks, and the evening will be topped off by the 50 lap HALMAR International North Region Race 8 of the Bob Hilbert Sportswear Short Track Super Series for Modifieds.

Sunday October 8th is reserved as a raindate for either show on that weekend. Gate and race times, prices, race rules, race purses, camping information for this weekend will be released in the coming weeks.

For more information on the Afton Motorsports Park please log on to the World Wide Web at; www.aftonmotorsportspark.com.

Afton Motorsports Park is fast, fun, and furious…check us out!