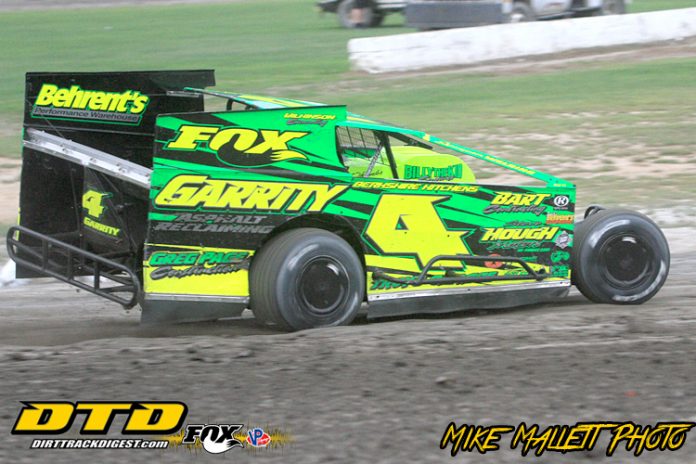 AFTON, NY – The final curtain came down on the 2017 racing season on Saturday night at the Afton River Club with the season ending banquet for the Afton Motorsports Park. Nearly 200 drivers, owners, fans, and track personnel attended the festive evening to celebrate the accomplishments of the past racing season.

After an outstanding all you wish to eat buffet of eye of round roast beef, honey ham, rigatoni, real mashed potatoes, mixed vegatables, mixed salad, and rolls and butter. The award presentations with awards supplied by The Trophy Guy were presented to all of winners.

In the ZMK Construction Modified division for the second year in a row it was all Andy Bachetti. The Sheffield, MA driver called Afton Motorsports Park his home speedway on Friday nights and won the track championship. Bachetti won six features during the year, which found his final point markers being 639, Bachetti as of this time is unsure whether he will be back to defend his title for the 2018 racing season.


The second five were led by JR Hurlburt who was sixth in points with 521. Alex Tonkin was seventh in points with 509 and one feature win with his brother Brett Tonkin in eighth with 506. Kenny Titus was ninth in points with 481 and Paul Jensen was tenth with 477.
A familiar face also found himself as track champion in the Scorpion Security Products

Open Sportsman division as Saquoit, NY driver Claude Hutchings, Jr. claimed the track championship for the second year in a row. Hutchings won four times during the season to chalk up 616 points, Hutchings will be back to defend his title for the 2018 racing season.
Butch Klinger was second with 556 points with his neighbr Aaron Shelton ending up in third with 533 points with one feature win. Travis Smith was fourth in points with 530 and two feature wins and Craig Pope rounded out the top five with 526 points.

Dolgelville, NY driver Cody Clark claimed his first Afton Motorsports Park track championship as he won the Ted’s Body Shop Crate Sportsman division. Cody won four times during the season to rack up 699 points, Clark will be back to defend his title for the 2018 racing season.

Matt Cole ended up sixth with 523 points, Tim French, II was seventh with 499 points, Rob Loucks was eighth was 450 points, Duane Knapp was ninth with 439 points, and Tyler Ward was tenth with 417 points.

The Auto Plus Street Stocks saw Afton, NY driver Damon Decker claim the track championship, his first ever title for the 18 year old driver. Damon scored six feature wins during the year to garner 679 points, he will be moving up to the Modified division for the 2018 racing season.

The Chambers and O’ Hara Four Cylinder Trucks saw Bainbridge, NY driver Ralph Cuozzo claim the track championship with 704 points and five feature wins. Ralph who also races in the Street Stock division said that he will be back in both divisions for the 2018 racing season.

Rookies of the Year award were presented to Matt Roberts in the Modifieds, Dennis Clapperton in the Open Sportsman, Rob Loucks in the Crate Sportsman, Dan Roe in the Street Stocks, and Jeff Young in the Four Cylinder Trucks.

Perfect Attendance for the year which saw drivers who accomplished this fete were entered into several drawings for some big ticket drawings. The Hig Fab Chassis which was drawn for drivers in the Modifieds, Open Sportsman, and Crate Sportsman with perfect attendance was won by Cody Clark. For the Street Stocks and Four Cylinder Trucks with perfect attendance a $500 gift certificate from Leaf Racewear was won by Pete Christensen.
Henry’s Exhaust Systems awarded a $300 gift certificate to a Crate Sportsman driver in the top ten in points and that winner was Matt Cole.

The Horizon Award winner was Dennis Clapperton while Wendy Kuhn won the Under the Radar Award.

Short Chance entertained the attendees at the close of the awards.

Afton Motorsports Park co – track promoters Ron Ford and Leon Andrus thanked everyone for supporting the track during a difficult 2017 racing season basically due to the weather. The banquet was the last official responsibility for Leon as he stepped down from the co – track promoter role at the end of the season.

Looking ahead to the 2018 racing season at the Afton Motorsports Park there are many positives to get everyone excited.

Ron Ford will be taking over as the sole promoter of the facility that now features an all new blue clay racing surface that was applied just after the Thanksgiving holiday by WD Smith Development and ZMK Construction. Extra blue clay was also trucked in and will be stockpiled at the speedway in case any additional blue clay needs to be added throughout the season.

Afton Motorsports Park will be again be an IMCA sanctioned track in 2018 after taking a year off in 2017. The IMCA Modifieds will be a weekly division and featuring a larger purse than they are normally paid at IMCA sanctioned facilities.

AMP also has boosted the competitive Street Stock division a purse increase for the upcoming season. The weekly purse at Afton now matches the outstanding purse that is paid at the Thunder Mountain Speedway weekly.

Despite going through difficult times with car counts, rules, and unsatisfactory comments made on social media. Track promoter Ron Ford is bringing back the Four Cylinder Truck division for the 2018 racing season. Ford has made rule adjustments and went to the track enforcing the rules for the divisions, instead of a private club like it did last year.

AMP has also received notification that they will be gaining at least four new Modified drivers for the 2018 racing season. Tim Mayne, Craig Hanson, Damon Decker, and Jeremy Smith have all informed track officials that they will be at Afton Motorsports Park on a weekly basis in 2018.

Once again the AMP racing season will conclude on Columbus Day Weekend with the 11th running of the Short Track Super Nationals presented by American Racer and Sunoco Race Fuels.

Afton Motorsports Park will be participating in three car shows during the month of March. AMP will have a booth during the first wekeend of the month at the Oakdale Mall in Johnson City, NY. The next week AMP will be participating at Motorsports Expo that takes place at the Center of Progress Building on the grounds of the New York State Fair in Syracuse. After a week off AMP will be at Speed Sport Showcase in Scranton, Pa. during the last weekend of March.

For more information on the upcoming racing season at the Afton Motorsports Park please log on to the World Wide Web at; www.aftonmotorsportspark.com.

Afton Motorsports Park is fast , furious, and fun, come check us out in 2018!