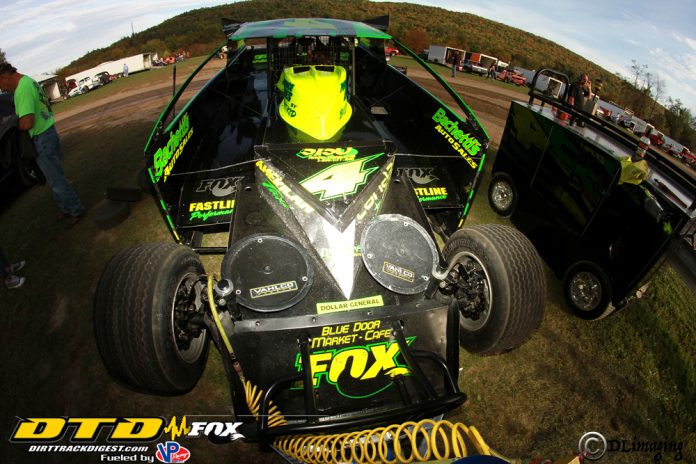 This week Afton Motorsports Park track preparation guru Mike Ford was able to remove all of the snow that was sitting on top of the all new blue clay racing surface. Now the hope is that Mother Nature will co – operate and become warmer, which will thaw out the grounds, and allow Ford and his crew ample time to work the all new racing surface into shape by the April 13th practice.

Ithaca, NY resident Barry Goodband has been named as the new voice of the Afton Motorsports Park for this season. Goodband currently co – announces at the Thunder Mountain Speedway and is looking forward to his first full time head announcing job.

Two time and defending ZMK Construction Modified track champion Andy Bachetti has informed Afton Motorsports Park that he will be calling Afton his home on Friday nights in 2018 and will be going for the three peat. Among the new Modified weekly racers that will be calling Afton their Friday night home and look to knock Bachetti of his throne are; Jeremy Smith, Craig Hanson, Travis Smith, Damon Decker, Tim Mayne, and Harold Humphrey.

Long time local racer and race fan Sonny Barrett has come on board at Afton Motorsports Park and will be heading up the computer for transponder scoring this year.

This year at Afton Motorsports Park there will be some adjustments to how handicapping is done. Of course the IMCA Modifieds will be adhering to their IMCA handicapping rules. The other five classes will be drawing for the first two weeks of the racing season, with handicapping going into effect starting with week three of the racing season. The new changes are any division in order to compete in heat races must have 12 racing machines registered. If there are less than 12 racing machines registered, that division will run extended hot laps and will run a feature only before intermission. Depending on car count in each division, this will determine how many cars will be handicapped for the feature lineup. With the anticipation of larger car counts there is a possibility of consi’s being run this year and no more than 26 cars will start in a feature on a Friday night this year.

Thirty – five year track official veteran JR Kennerup, who was in charge of handicapping and scoring last year at Afton Motorsports Park, will be returning this year with additional duties as Kennerup has been named by Afton Motorsports Park track promoter Ron Ford as the Director of Media Relations.

Due to new insurance regulations this year there will be strict enforcement of no charcoal or gas grills being used in the pit area. Afton Motorsports Park insurance carrier has mandated that no grills be allowed in the pit area due to the possibility that one of these fires could become out of control.

The 2018 racing season at Afton Motorsports Park begins on Friday April 13th with night one of Test and Tune Sessions for any racing machine that is in competition at the track this year. Friday April 20th will be night two if Test and Tune Sessions and each of these nights will see a $20 pit admission fee while the grandstand admission is free with the donation of a canned good with all of the food being donated to the local area food banks.

Friday night April 27th is Opening Night for the ZMK Construction Modifieds, Chambers & O’ Hara Open Sportsman, Butler Auto Sales Crate Sportsman, Rinker Insurance Agency Street Stocks, IMCA Modifieds, and Four Cylinder Trucks. Pit gates open at 4 pm, grandstands open at 4:30 pm, drivers meeting will be at 5:55 pm, hot laps at 6:15, and the first heat begins promptly at 7 pm. Pit admission is $30, adult admission is $12 with senior citizens ages 62 and up admitted for $10, youth aged from 9 to 14 are $5, and 8 and under are free.

Information for the track can also be found on the World Wide Web at www.aftonmotorsportspark.com.

Afton Motorsports Park is furious, fast, and fun….come check us out!