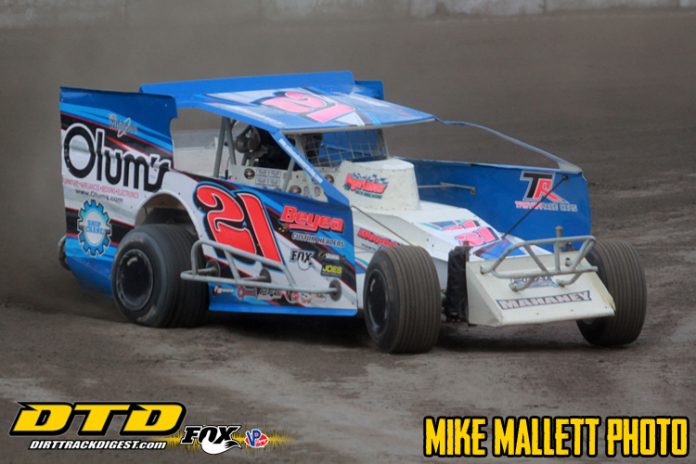 AFTON, NY –  After a two week delay due to the late winter, Afton Motorsports Park swung open their gates for the 2018 season opener on Friday night. It was quite an opener that will keep everyone in attendance talking about it for some time.

In the 30 lap ZMK Construction Modified feature leader Andy Bachetti made one bobble exiting turn four on lap 28 and that allowed Mike Mahaney to slip underneath. Mahaney then drove under Bachetti to complete the pass in turn one and go on to the win. Chad Cook, Darwin Greene, and Mitch Gibbs rounded out the top five.

The 20 lap Butler Auto Sales Crate Sportsman feature was led flag to flag by Corey Cormier who held off a determined Allan Hodge for the win. Blaine Klinger, Matt Roberts, and Gary Smith rounded out the top five.


The 20 lap Rinker Insurance Agency Street Stock feature saw veteran driver Butch Green inherit the lead on lap 17 when the leader spun out due to mechanical failure. Green then held off Dustin Harris, Earl Zimmer, Dave Cronk, and Shawn Boynton for the win.

The 20 lap IMCA Modified feature saw James Cornell take the lead from Beau Ballard on lap two and appeared that he would be in for an easy win. But a fast closing Jake Maynard made him work for it over the final stages of the feature. Cornell in for the win over Maynard, Ballard, Tyler Stoddard, and Bill Nichols.

The 15 lap Four Cylinder Truck feature saw Ralph Cuozzo start deep in the field and he took the lead on lap seven from Jeff Young and go on to the win. Young, Brandon Loucks, Jerry Lanfair, and Dylan Nichols completed the top five.

An early race rash of yellow fever slowed the pace with four yellows within the first four laps. After that a long stretch of green flag racing took place as the next 24 laps went caution free.

Bachetti still held a comfortable lead with Cook now getting past Jordan for second on a lap five restart. Meanwhile seventh place starter Mike Mahaney was making his presence felt as he moved into fourth on lap five.

The top five of Bachetti, Cook, Jordan, Mahaney, and Darwin Greene remained the same for the next 13 laps.

On lap 18 in turn two Bachetti caught a soft spot in the track and Cook brought the crowd to their feet as he got by him for the lead. But Bachetti only let that last for a straightaway as he motored under Cook in turn three to regain the lead on lap 19.

With leader Bachetti mired in heavy lap traffic, but with a comfortable lead, the action behind him was outstanding. Cook, Jordan, Mahaney, Green, Brett Tonkin, and Mitch Gibbs all were racing for positions second through seventh.

The final caution of the event happened on lap 28 as the lap car of Kailee DiMorier spun in turn one and at the same time Jordan and Tonkin stopped too to shuffle the running order.

Bachetti pulled away to a small lead on the restart but exiting turn four he slipped up the track, this small opening gave Mahaney the advantage he needed as he got under Bachetti going into turn one to take the lead.

Mahaney led the final lap to score the win in his Charlie Davis owned ride sponsored by Olum’s. Bachetti settled for a disappointed second with Cook, Greene, and Gibbs rounding out the top five.

With the top four cars staying in the same running order for the first six laps. the racing action was focused on a pair of Bill’s in Bill Deckleman and Bill Spoonhower were making their way to the front.

Up front Hutchings sped away to his big lead on lap six restart while Andersen got by Rosa for second, Deckleman moved into fifth with Spoonhower now taking seventh.

One lap later the running order would be shuffled once again as Hart, Deckleman, and Butch Klinger all became entangled to bring out the yellow. Hart and Deckleman were both done for the night while Klinger made a pit stop to return to the race two laps down.

At the crossed flags Hutchings had a comfortable lead over Andersen, Rosa, Spoonhower, and Clapperton.

Spoonhower moved past Rosa for third on lap 12 and on a lap 15 restart he got under Andersen and set his sights on leader Hutchings.

But Spoonhower ran out of time as Hutchings came home for the win with Andersen in third, Rosa in fourth, and Clapperton in fifth.

Qualifying for the 16 car field saw heat wins go to Rosa and Hutchings.

The racing action was intense within the top ten as teenager Blaine Klinger pulled off a veteran drivers’ move to go from sixth to third on lap five.

Matt Roberts who started in 11th and 15th place starter Gary Smith were now both making some noise as they were coming through the field quickly by lap seven. Roberts moved from seventh to fourth as he hugged the bottom on lap eight with Smith literally glued to his back bumper as he took fifth.

On a lap 13 restart, the first of the race two, three car battles took place. The top three cars of Cormier, Hodge and Klinger raced for the lead while Roberts, Smith, and Michael Schane all raced for fourth.

Despite two restarts within the final five laps Hodge didn’t have enough to get by Cormier as the new track regular took home the win over Hodge, Klinger, Roberts, and Smith.

Qualifying for the 19 car field had heats wins go to Cormier, Christ, and Hodge.

Earl Zimmer and Jerry Lobdell, Jr. brought the Street Stock field to green for the start of their 20 lap feature. Zimmer jumped into the lead over Lobdell, Butch Green, Dustin Harris, and Shawn Boynton.

This highly entertaining feature  saw Lobdell get past Zimmer who hit a soft spot in the track to grab the lead on lap three. At the same time Green hit the same exact spot and lost two positions to fall back to fifth.

Boynton meanwhile was showing that he had a very fast racecar and he proved it with a power move on the outside to move past Harris for third on lap five. The third generation racer didn’t stop going forward there as he moved past Zimmer for second at the half way point.

Green recovered from his early race bobble to move back into third on lap ten and Harris got past Zimmer one lap later for fourth.

Boynton once in second applied heavy pressure on leader Lobdell. Boynton who was running exclusively the high groove changed it up and tried to sneak under Lobdell for the lead exiting turn two on lap 15. Lobdell literally slammed the door as he chopped down on Boynton and this cost Boynton two positions.

One lap later leader Lobdell had mechanical trouble on his mount and spun out in turn two to bring out the yellow, Boynton was also involved as the top four cars were racing under a blanket.

The running order was now shuffled as Green inherited the lead over Harris, Zimmer, Dave Cronk and Doug Stack, Jr.

Green led the final four laps in the Jack Holcomb owned car to claim the win over Harris, Zimmer, Cronk, and Boynton.

Qualifying for the 14 car field saw Zimmer and Lobdell win the heat races.

Ballard vaulted into the lead over James Cornell, Nichols, Jake Maynard, and Tim Vandemark. Cornell who knows the Afton Motorsports Park like the back of his hand quickly disposed of Ballard and took the lead on lap two.

Maynard hit a soft spot in the track and lost two positions on lap two with Tyler Stoddard getting past his team mate Nichols for third on lap four.

Cornell was literally on a Friday night cruise out front by lap seven. Behind him though there was good racing taking place as Ballard, Stoddard, Maynard, Nichols, and Vandemark all raced for positions three through sixth.

The top five running order of Cornell, Ballard, Stoddard, Maynard, and Nichols remained the same until lap 12. At this point an impressive drive authored by Maynard began to take place.

Maynard moved past Stoddard with a slick inside move to take third on lap 14. Two laps later Maynard all of the sudden showed quickness as he moved into second past Ballard and set his sights on leader Cornell who was a full straightaway ahead.

Cornell who at once thought he had an easy win all of the sudden had Maynard right on his back bumper with two laps to go. Cornell turned up the wick to hold off the hard charging Maynard for the win with Ballard, Stoddard, and Nichols rounding out the top five.

Crandall moved into second on lap two with Cuozzo right on his back bumper. Cuozzo showing his dominance of this class went from third to first on lap seven to grab the lead.

With Cuozzo way out in front the story for the second half of the feature was teenager Brandon Loucks who was in his first ever race. Loucks started third but dropped back at the start and raced at his own pace for the first few laps. Loucks started getting quicker and quicker the longer the race stayed green and by the halfway point he was in third.

Cuozzo in for the easy win over Young who held off Loucks with Lanfair in fourth and Nichols in fifth.

NOTES; track promoter Ronnie Ford would like to say Thank You to everyone in attendance for their patience on the evening. Spring like track conditions still playing havoc with the smoothness of the track as a couple of track maintenance sessions had to be done during the program. Modified racer Tim Mayne had his night end before hot laps as he couldn’t get his car out of high gear and didn’t want to do any drive train damage by racing it. Jeff Bronson was shook up after taking a hard ride in the Modified feature as his car went airborne after contacting an inside track marking uke tire and ended up against the outside wall. Consla Stone Products of Susquehanna, Pa. put up a $100 Modified Hard Charger Award on the night and that was claimed by Craig Hanson who came from 24th to tenth in the feature. Many delays during the program due to drivers refusing to stay out of the infield, which in turn pulled up the inside track marking uke tires on to the racing surface. All features were started via heads up from heat finishes with the exception of the IMCA Modifieds who re drew the top four starting spots due to their sanctioning.

This Friday night May 18th will be Fan Appreciation Night for the Modifieds and IMCA Modifieds. As both divisions will be in front of the grandstands at intermission to sign autographs and have pictures taken. Also in action will be the Open Sportsman, Crate Sportsman, Street Stocks, and Four Cylinder Trucks. Pit gates open at 4 pm, grandstand gates open at 4:30 pm, hot laps at 6 pm, and the first heat at 7 pm. Pit admission is $30, grandstand admission is $12, senior citizens age 62 and up is $10, youth aged 9 to 14 are $5, and 8 and under with a paid adult admission are free.

For more information on Afton Motorsports Park you can log on to your computer at www.aftonmotorsportspark.com or call 607 – 624 – 3772.

Afton Motorsports Park is fast, fun, and furious… come check us out!