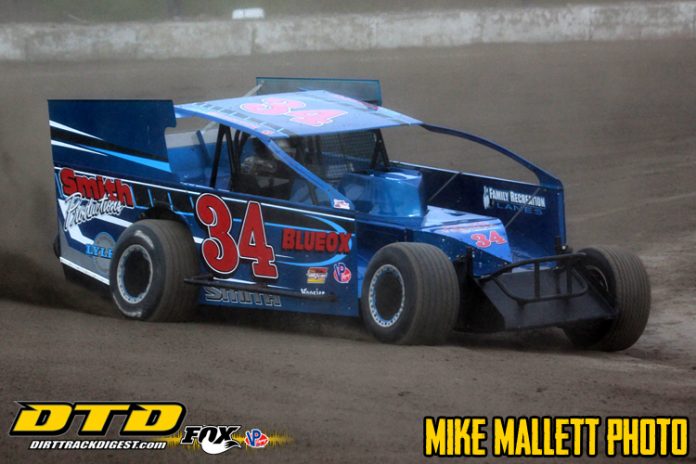 AFTON, NY – The second week of racing at the Afton Motorsports Park saw three new feature winners in the Modified and both Sportsman divisions. While in the Street Stock, IMCA Modified, and Four Cylinder Truck divisions there were repeat feature winners.
The ZMK Construction Modified feature saw Rusty Smith inherit the lead when leader Brett Tonkin broke a rear end with nine laps to go. Smith went on to the popular win over JR Hurlburt, Mitch Gibbs, Jeremy Smith, and Darwin R. Greene.

The Rinker Insurance Agency Street Stocks for the second week in a row the win went to Butch Green in the Holcomb Racing entry over Dustin Harris, Jerry Lobdell, Jr., Shawn Boynton, and Dave Cronk.

Rusty Smith and Brett Tonkin brought the Modified 30 lap feature field to green with Tonkin grabbing the lead over Smith, Paul Jensen, JR Hurlburt, and Nick Nye. Hurlburt got past Jensen for third on lap six and set sail after the leading duo.

With the race staying under green flag conditions the Smith car was becoming quicker and quicker each passing lap and on lap ten he got past Tonkin for the lead. Smith entered heavy lap traffic one lap later but he sliced through these cars with ease to keep a comfortable lead.

The first yellow of the race came out on lap 13 as Jensen and Nye both got tangled up with a lap car to end both of their nights.

On the double file restart Tonkin once again was able to get the jump on Smith to grab the lead over Hurlburt, Mitch Gibbs, and Jeremy Smith.

The action behind the top five was hotly contested to say the least with a gaggle of cars all racing for positions sixth through tenth.

Tonkin’s great run ended on lap 21 as the rear end broke entering turn one to bring out the caution. Rusty Smith was now handed the lead over Hurlburt, Gibbs, Jeremy Smith, and Darwin R. Greene.

On the lap 21 restart Hurlburt tried to sneak under Smith for the lead but Smith would have nothing of it. Despite one final restart with six laps to go Rusty Smith in for the popular win over Hurlburt, Gibbs, Jeremy Smith, and Greene.

Mady grabbing the lead over Kuhn, Tyler Hart, Claude Hutchings, Jr., and Butch Klinger.
On a lap four restart Hutchings jumped the birm in turn two and this allowed Steve Andersen to go to fourth and Bill Deckleman to fifth.

With eight laps to go Mady entered heavy lap traffic but that didn’t phase him one bit as he raced through it with ease. With Mady way out in front a blanket could have been tossed over the next seven positions.

With the white flag waving Kuhn slipped up the track and this allowed Hart to take second and at the same time Spoonhower went from eighth to fifth.

Mady in for the win over Hart, Kuhn, Andersen, and Spoonhower.

Clark was able to wrestle the lead away from Ward on a lap three restart with Cormier going from fifth to third and Blaine Klinger going from eighth to fifth. Klinger got past Roberts for fourth on lap four and set his sights on the top running trio of Clark, Ward, and Cormier.

With the remainder of the feature staying under green flag conditions and racing in lap traffic made things interesting at times for a majority of the top five.

With four laps to go Cormier was able to slip under Ward for second and one lap later Klinger who was in fourth slipped out of the groove and this allowed Gary Smith to go from seventh to fourth and Roberts moved back into fifth.

Veteran driver Smith continued his charge to the front as he took third from Ward with two laps to go.

Clark in for the win over Cormier, Smith, Roberts, and Ward.

Qualifying heats for the 19 car field were captured by Ward, Roberts, and Clark.

The top four cars pulled away from the rest of the field while Dave Cronk moved into fifth on lap four.

Green applied relentless pressure on Lobdell for the lead and it paid off as he took the lead on lap nine.

Harris was able to move into second on lap 12 as Lobdell slipped out of the groove.
With the feature going caution free, Green in for the win over Harris, Lobdell, Boynton, and Cronk.

Due to a small number of entries, eight, no qualifying heat races were conducted.

Second generation racer Stoddard took the lead on lap two and at the same time Maynard slipped past Cornell for third.

Maynard continued his charge to the front as he motored around Vandemark for second on lap three, but one lap later got into the loose stuff and lost two spots.

Stoddard was in full control of the race on lap five, Cornell got past Vandemark for second on this lap and set sail after Stoddard.

Cornell was able to catch and pass Stoddard for the lead on lap eight. Meanwhile Beau Ballard moved into third with Maynard and Vandemark rounding out the top five.

Just like a week ago when Cornell got the lead he was pressured for the lead, as Stoddard stayed right on the back bumper of the Cornell machine. Meanwhile Ballard and Maynard were swapping paint for third and the resulting contact by both forced both of them to spin out on lap 17.

Cornell in for the win over Stoddard, Ballard, Vandemark, and Nichols.

Stoddard won the qualifying event for the eight car field.

Cuozzo who started seventh made quick work of the field as he moved into the lead on lap two with a three wide inside turn two pass for the lead.

With Cuozzo out in front and Crandall chasing him a good race for third was taking place between Lanfair, Loucks, and Jeff Young. The good run of Lanfair was sidelined with a flat right rear tire sending him pit side.

Cuozzo in for his second consecutive win over Crandall, Young, Loucks, and Pete Christensen.

No qualifying events were held for the field of nine.

NOTES; despite the extra work during the week put in by the track maintenance crew in removing the new surface, the track still did end up being soft and rough in spots. Track promoter Ron Ford and his staff vowed to once again put in many long hours to get the track straightened out, plus Mother Nature needs to cooperate too. For the second consecutive week Craig Hanson claimed the Consla Stone Products Hard Charger Award in the Modifieds worth $100 and this award will be a weekly award. The Trophy Guy has signed on to be the division sponsor for the IMCA Modifieds. Tired Iron Repair of Saquoit, NY came on board as the Kids Club sponsor this past week. Once again the inside track marking uke tires took a beating on this night. Track management would like to thank all of the Modifieds and IMCA Modifieds who brought their car over to the midway at intermission for Fan Appreciation Night, which was very popular with the fans.

Next week a big seven division show, with no increase in admission will kick off the

Memorial Day Weekend as the Lightening Sprints join the card and it will be their Fan Appreciation Night. Also on the card are the ZMKConstruction Modifieds, Chambers & O’ Hara Open Sportsman, Butler Auto Sales Crate Sportsman, Rinker Insurance Agency Street Stocks, The Trophy Guy IMCA Modifieds, and the Four Cylinder Trucks. Pit gates open at 4, grandstand gates open at 4:30, hot laps are at 6 pm, and the first heat goes green at 7 pm sharp. Pit admission is $30 with no license required, grandstand admission is $12, senior citizens age 62 and up are $10, youth aged 9 to 14 are $5, and 8 and under are free with a adult admission.

Afton Motorsports Park is fast, fun, and furious … come check us out!