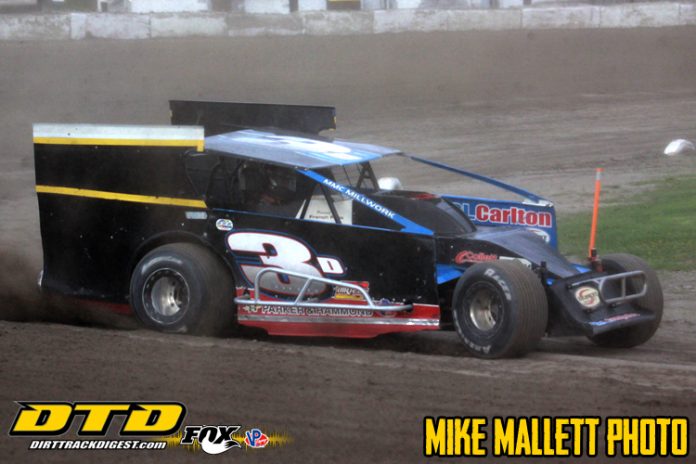 Rinker Insurance Agency Street Stock 15 lap feature for the fourth week in a row was all Butch Green as he claimed the win over Dustin Harris, Jonathon Fowlston, and Ralph Cuozzo.

The Eric Wagner Memorial Four Cylinder Truck 15 lap feature was all Ralph Cuozzo, who won this race for the second year in a row; Bob Crandall, Jeff Young, Trey Palmer, and Brandon Loucks rounded out the top five.

The 30 lap Modified feature had Steve Babicek and Kenny Titus bring the field to green with Babicek getting the lead over Brett Tonkin, Titus, JR Hurlburt, and Darwin R. Greene.
The smooth racing surface led to plenty of passing early in the race with Mitch Gibbs moving into fifth on lap three.

On a lap seven restart Hurlburt was able to get under Tonkin to take second and he applied heavy pressure on Babicek for the lead, Gibbs got by his future son in law Tonkin on lap eight for third.

At the halfway point, three different racing battles kept everyone’s attention with Babicek and Hurlburt racing for the lead. Gibbs and Tonkin were racing hard for third with Titus, Andy Bachetti, and 14th place starter Nick Nye all racing for fifth.

On a lap 18 restart Bachetti was able to move into fifth, upfront Babicek opened up a small lead as it seemed the tires on the Hurlburt machine sealed over.

What once was different races for positions now all of the sudden became a five car race for the lead as Babicek was leading Hurlburt, Gibbs, Tonkin, and Bachetti with ten laps to go.

Tonkin passed his future father in law Gibbs for third on lap 22 and immediately applied heavy pressure on Hurlburt for second. Gibbs was left meanwhile to fend off Bachetti for fifth who had Nye all over him too.

The frustrating season for Bachetti at Afton Motorsports Park cropped up once again as his engine expired with five laps to go as he rolled to a stop in turn four.

Babicek led the last five laps unchallenged in his unsponsored car to claim the win over Hurlburt, Tonkin, Gibbs, and Nye.

Qualifying races were captured by Tonkin and Babicek.

The 20 lap Open Sportsman feature was brought to the green by Craig Pope and Brandon Kuhn. Pope jumped out to the lead over Kuhn, Dennis Clapperton, Tyler Hart and Bill Deckleman.

The racers were all showing what they can do on a smooth race track as passing was plentiful throughout the early portions of the event. Clapperton took second from Kuhn on lap two, but Kuhn returned the favor two laps later.

Deckleman moved into third on lap five with Claude Hutchings, Jr. moving into fifth on this lap.

The top four cars of Pope, Kuhn, Deckleman, and Hutchings were pulling away while Clapperton, Tyler Hart and Don Hart, Jr. all raced hard for fifth. The hard racing for fifth saw Clapperton and Tyler Hart come together on lap eight to bring out the caution.

On the restart Pope pulled out to a small lead while Deckleman slipped under Kuhn to take second, and Don Hart, Jr. moved into fifth.

Deckleman glued to the bottom part of the smooth surface took the lead at the halfway point. Once in front Deckleman was on a Sunday afternoon drive on a Friday night as he opened up a huge lead within a lap of getting the lead.

Hutchings got past Kuhn for third on lap 12 and set sail after Pope who was running second.

After several laps of trying Hutchings was able to grab second from Pope with two laps to go. But the defending track champion ran out of laps as Deckleman in for the win over Hutchings, Pope, Kuhn, and Don Hart, Jr.

Qualifying races were captured by Butch Klinger and Pope.

The 20 lap Crate Sportsman feature had Duane Knapp and Fred Christ bring the field to green with Knapp getting the lead over Christ, Rob Loucks, Blaine Klinger, and AJ Digsby.
Passing was plentiful early in the race with Loucks moving into second on lap two and Corey Cormier moving into fourth at the same time.

Cormier was a driver on a mission on this night as he moved into third on lap three and applied heavy pressure on Loucks for second.

On a lap eight restart Cormier motored into the lead over Knapp, Christ, Digsby, and Klinger. Once in front Cormier meant business as he opened up a full straightaway lead in a matter of two laps.

Shelton was able to race into third by lap 12 with Christ, Klinger, Bobby Flood, and Smith all in tow.

The final yellow of the of the race came out on lap 15 and it set up a five lap shootout.
Cormier was up to the task as easily captured the win over Knapp, Shelton, Smith, and Klinger.

Qualifying races were won by Klinger and Kinser Hill.

Gary Roberts and Jake Maynard brought the 20 lap IMCA Modified feature to green with Roberts getting the lead over Maynard, Tyler Stoddard, James Cornell, and Beau Ballard.
Cornell who has won the three previous features this year wasted no time in showing just how hooked up his car is on the smooth Afton Motorsports Park track. Cornell moved into third on lap two and into second one lap later, and on lap six powered around Roberts in turns three and four to grab the lead.

With Cornell out front and unchallenged for the lead an outstanding race for second was developing between Roberts, Maynard, and Ballard. These three drivers were racing hard for position and trying every little move they knew, to try and gain a position.

The only thing slowing Cornell up was yellow flags, which came out twice during the later portions of the event.

Cornell in for the win over Roberts, Maynard, Ballard, and Stoddard.

The qualifying race earlier in the program was won by Cornell.

The Street Stock feature due to low numbers was reduced to 15 laps on this night which saw Jonathon Fowlston and Ralph Cuozzo lead the field to green.

Dustin Harris took the lead from his fourth place starting spot to lead lap one over Fowlston, Butch Green, Ron Greek, and Cuozzo.

Green who entered the program undefeated moved into second on lap two and started to apply heavy pressure on Harris for the lead, Greek meanwhile moved past Fowlston for third.

After three laps of constant pressure Harris left an opening and Green pulled off a Sprint Car type slide job pass in turns three and four to grab the lead as the lap counter clicked to six.

Once in front Green pulled away leaving Harris all by himself in second, Greek and Fowlston put on a great side by side race for third.

Green in for the win with Harris, Greek, Fowlston, and Cuozzo rounding out the top five at the checkers. In post race tech inspection the car of Greek was found to be racing under the minimum weight requirement and lost his third place finish.

The Eric Wagner Memorial for the Four Cylinder Trucks saw Pete Christensen and Jerry Lanfair bring the field to green to start their 15 lap feature.

Ralph Cuozzo bolted from his ninth place starting spot to the lead before the first lap was scored. Jeff Young, Bob Crandall, Trey Palmer, and Christensen rounded out the top five after one lap.

Rookie driver Brandon Loucks after being involved in an accident before one lap was scored raced his way back into fifth on lap two.

Up front Cuozzo was in front with a commanding lead with Crandall getting past Young on lap four.

A double file restart on lap six gave Crandall his shot at getting past Cuozzo for the lead. But Cuozzo was ready for the Crandall charge and he kept his teammate at bay for the lead.

Loucks got past Palmer for fourth on lap seven and these two drivers set up their own private race for fourth.

Crandall didn’t give up as he applied pressure on Cuozzo for the lead and if he slipped up would be able to make a pass, but that pass never happened.

Cuozzo in for the win, his second consecutive Eric Wagner Memorial checker over Crandall, Young, Palmer, and Loucks.

NOTES; the much improved racing surface received great reviews from all drivers for it’s table top smoothness. It was a blown engine night for several teams with Andy Bachetti blowing one in the feature. Jeff Sheeley exploded an engine in the heat race and drove the Olin Renwick car in the feature. Butch Klinger had to vacate his outside pole starting spot due to low oil pressure in his engine and he drove the Craig Monroe car in the feature. ZMK Construction sponsored the night and their employees filled up both VIP Rooms in the tower. Don Hart, Jr. was racing the backup car of his nephew Tyler on this night as the team was trying to figure out an laying down engine issue. Good to see former Utica – Rome Speedway owner Gene Cole in attendance on this night.

Admission prices for the June 15th show are grandstand admission is $12 with seniors age 62 and up being admitted for $10, youth aged 9 to 14 are $5, and 8 and under are free with a paid adult admission. Pit admission with no membership required is $30.

Pit gates open at 4pm with grandstands opening one half hour later at 4:30 pm. Hot laps begin at 6 pm and the first heat will be green flagged at 7 pm sharp.