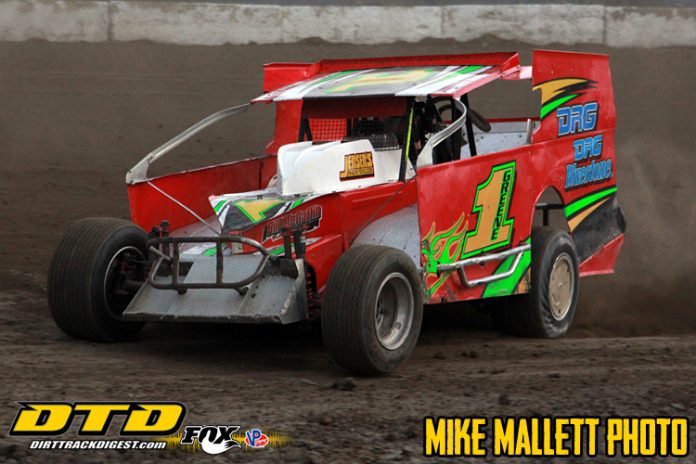 AFTON, NY –  The 129th Afton Fair was kicked off in fine fashion on Friday night at the Afton Motorsports Park with a jammed packed facility to start the three day fair along with good racing on a ever widening track surface.

In the ZMK Construction Modifieds. Darwin R. Greene got the monkey off his back by leading the entire distance to capture the win and did his celebratory victory laps running around the car in victory lane with his son. Mitch Gibbs, Steve Babicek, Brett Tonkin, and Rusty Smith rounded out the top five.

The Chambers & O’Hara Open Sportsman feature saw it’s first repeat feature winner of the year. As Bill Deckleman outgunned Don Hart, Jr. on a restart midway through the feature to go on to the win. Hart, Jr., Claude Hutchings, Jr., Dennis Clapperton, and Tyler Hart completed the top five.
Butler Auto Sales Crate Sportsman point leader Corey Cormier got back to victory lane for the fourth time this year with his victory. Cormier passed Kinser Hill on a lap 13 restart and then held off the high flying Gary Smith for the win; Ryan Macartney, Hill, and Aaron Shelton rounded out the top five.
Like it has been all season long in the Rinker Insurance Agency Street Stocks. Butch Green wheeling the Jack Holcomb owned entry raced to the feature win with ease. Green took the lead on lap six from Dustin Harris and went on to the win over Harris, Dave Cronk, Ron Greek, and Shawn Stalker.
The Four Cylinder Truck feature saw Bristol, CT. driver Trey Palmer come home the feature winner  for  the first time this year. Palmer inherited the lead on lap six when leader Bob Crandall was spun out by second place runner Ralph Cuozzo. Palmer led the remaining distance to grab the win over Crandall, Cuozzo, Scott Chapman, and Brandon Loucks.

The 30 lap Modified feature was led to green by the front row of Steve Babicek and Darwin  R. Greene. Greene using the quick outside groove bolted into the lead over Babicek, JR Hurlburt, Mitch Gibbs, and Craig Hanson.

Greene who has had some rotten luck this year to date was running on all cylinders on this night and opened up a full straightaway lead within the first five laps of the feature. Behind him the racing action was intense to say the least with a multitude of side by side racing taking place.

Greene was setting a blistering pace while the battle for second place was heating up. Gibbs jumped to the outside groove and immediately found success as he got past Babicek for second on lap eight.

Once in second Gibbs found the outside groove to his liking and was slicing into the huge lead of Greene. Meanwhile the race for third intensified as Tonkin, Smith, and Nye were all racing for Babicek for the show position.
At the halfway point Greene’s once huge lead was now down to ten car lengths as Gibbs was a half second quicker than anyone else in the field according to AMB Transponder lap times.

Greene entered heavy lap traffic on lap 17 and not only did he have to try and get through the lap cars quickly, he had Gibbs now right on his back bumper racing him for the lead.

The only yellow of the event came out on lap 19 as Randy Green rolled to a stop in turn one with a broken right rear axle.

On the single file restart Greene once again bolted out to a big lead as it appeared that the heat went out of the tires on the Gibbs machine.
Greene easily led the remaining distance to capture the win over Gibbs, Babicek, Tonkin, and Smith.

Qualifying heat races were won by Nye, Greene, and Hurlburt.

The complexion of the race would change greatly on a lap three restart as Deckleman was able to race alongside of Hart to grab the lead exiting turn two.

Once in front Deckleman wasn’t going to be caught as he opened up a big lead over Hart, Jr., Hutchings, Jr., Dennis Clapperton, and Tyler Hart.
With Deckleman out in front all alone Hutchings raced with Hart, Jr. for second while Clapperton was holding off Tyler Hart for fifth.

At the checkers Deckleman in for the dominate win, the first repeat winner in the division this year. Hart, Jr., Hutchings, Jr. Clapperton, and Tyler Hart rounded out the top five.

Qualifying races were captured by Hart, Jr. and Deckleman earlier in the racing program.

Shelton got past his neighbor Klinger for fourth on lap three while seventh place starting Ryan Macartney moved into fifth at this time.

On a lap four restart Hill was able to wrestle second away from Grover and set his sights on leader Loucks. Meanwhile Corey Cormier who started ninth moved from seventh to fifth on the restart.

Loucks and Hill were running away from the field and setting up their own personal race for the lead by lap eight. A great three wide race for third was taking place behind them between Grover, Shelton, and Cormier. Macartney and Gary Smith were now also getting involved in this race for third as five cars were all racing for third by lap nine.

At the halfway point Loucks was leading Hill, Cormier, Grover, Macartney, Smith, and Shelton in a very heated contest.

On a lap 12 restart Loucks pushed up wide in turns three and four and that was all Hill needed as he darted underneath to grab the lead.

Grover’s great drive ended on the next lap as he spun out to bring out the yellow.

On the restart Cormier dove under Hill and Loucks in turn one to grab the lead. When Loucks pushed up the track in turn three Macartney moved into third and Smith into fourth and Shelton into fifth.

Smith jumped to the outside groove and found immediate success as he went from fourth to second on lap 15.

One  final restart on lap 18 gave Smith one final shot at passing Cormier for the lead. But Cormier held his ground and Smith ran out of time as he came up a car length short at the checkers. Macartney got past Hill for third on the final turn and Shelton settled for fifth.

Qualifying races were won by Hill, Shelton, and Klinger.

The front running trio of Harris, Green, and Cronk all sped away from the remainder of the field. Ron Greek moved from ninth to fourth on lap two as Burgher pulled pit side with mechanical issues.

On a lap five double file restart Green stayed in the upper groove while leader Harris raced in the bottom groove. Exiting turn four to complete lap six Green found the bite that he was looking for to grab the lead.

Once in front Green like he has all year long stepped up the pace and left all of his competition  literally in the dust.

Green in for the win over Harris, Cronk, Greek, and Stalker.
Green swept the evening as he won the qualifying race.

The outcome of the race would change dramatically exiting turn four to complete lap five. Cuozzo trying his best to get around Crandall for the lead got into the rear bumper of the Crandall machine. The contact sent the Crandall machine into a spin into the infield to bring out the yellow. It was determined by track officials that Cuozzo caused the contact and he was sent to the rear of the field as a penalty.
Palmer inherited the lead and on the restart he had Loucks, Crandall, Cuozzo, and Lanfair in tow for the lead.

Palmer was leading comfortably while rookie driver Loucks looked like a veteran driver as he was holding off Crandall and Cuozzo for second. The excellent run of Loucks ended during a lap 10 caution period as his truck lost power and he was pushed to the pits.

Palmer ran the last five laps with ease to win the feature over Crandall, Cuozzo, Scott Chapman, and Loucks.

NOTES; Greg Page Construction sponsored the evening of racing and they enjoyed themselves in the VIP Tower. Last weeks Crate Sportsman feature winner Fred Christ blew an engine in the heat race and was done for the night. Crate Sportsman racer AJ Miller had to scratch from the feature due to rear end hub issues. A very well run racing program saw all racing completed by 9:40 pm, which was then followed by an excellent fireworks display that was sponsored by NBT Bank. Several new drivers in attendance getting set up for the big Short Track Super Series event coming up on Wednesday July 25th. Bud Leizear debuted on this night as the new track co – announcer and did a nice job in his first ever effort.

Next Friday night at Afton Motorsports Park will be Mid Season Championship night with championship points being awarded and there will be no increase in admission and no extra laps in the feature. In action will be the ZMK Construction Modifieds, Chambers & O’ Hara Open Sportsman, Butler Auto Sales Crate Sportsman, Rinker Insurance Agency Street Stocks, and Four Cylinder Trucks. These five divisions will be racing for championship points next Friday night. The Trophy Guy IMCA Modifieds are also in action next Friday night but will be racing for their normal IMCA National points.

Admission prices are $30 for the pits with no track license or membership to buy. Grandstands are $12 for adults, $10 fro seniors age 62 and up, $5 for youth aged 9 to 14, and 8 and under are free with a paid adult admission.
Pit gates will open at 4 pm with grandstand gates opening one half hour later at 4:30 pm, hot laps are at 6:15 pm, and the first heat goes green at 7 pm sharp.