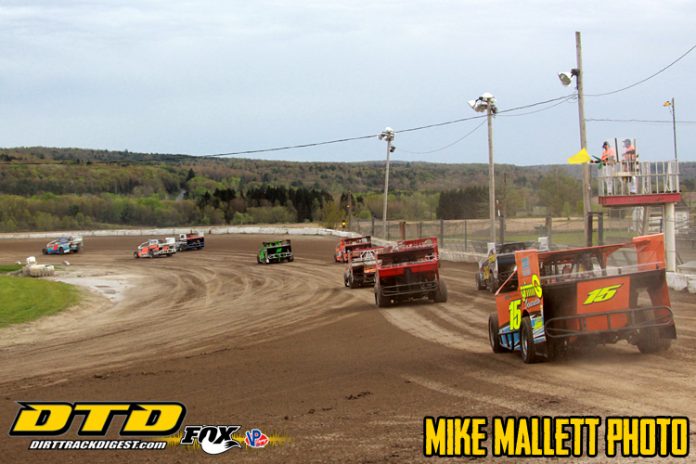 Afton Motorsports Park has hosted more STSS events – a total of eight – than any other track since the series was formed in 2014. And back in 2006, Afton was the site of the first-ever promotion by STSS organizer Brett Deyo with the inaugural “Working Man’s Race” Short Track SuperNationals.

On Wednesday, July 25, the series returns to the Ron Ford-promoted facility with its annual mid-summer stop: the ‘Afton Action 50’ paying $5,000 to win and $400 to take the green flag.

The ‘Afton Action 50’ will serve as the halfway point – race No. 5 – of the 10-race Halmar International North Region dishing out $12,500 to the champion.

Also on the open-wheel doubleheader is the STSS Crate 602 Sportsman inaugural North Region race, the first of five offering a $1,000 champion, paying $1,000 to win for 25 laps. This series was scheduled to kick off on Memorial Day weekend, but rain prompted the postponement of the opener at Thunder Mountain Speedway in Center Lisle, N.Y., to Sept. 23.

Stewart Friesen is the defending ‘Afton Action 50’ race winner. Friesen has two STSS wins at Afton, one a year ago and the second back on July 22, 2015.

The July 25 stop by the series will be among the most lucrative races at Afton this season, with $400 reserved just to take the green flag.

The Crate 602 delayed STSS North opener gives a strong first-to-last payout and the potential to challenge for the series title.

Complete race information for the ‘Afton Action 50’ has been posted at the following link: https://bdmotorsportsmedia.com/afton-action-50-rules-prices-general-info/

There is a scheduled rain date for this event in place of Thursday, July 26.

Afton Motorsports Park has announced its July 27 Friday event has been canceled to put full focus on the ‘Afton Action 50’ event. Track regulars in the Modified and Crate 602 Sportsman divisions will receive 25 points toward the weekly championships by participating in the STSS event.

Afton Motorsports Park is located conveniently off I-88 Exit 7 (Afton), approximately 25 miles north and east of Binghamton, at 46 East Main Street Afton, N.Y. 13730. There is plentiful space for parking and camping. To learn more about Afton Motorsports Park, visit www.aftonmotorsportspark.com.