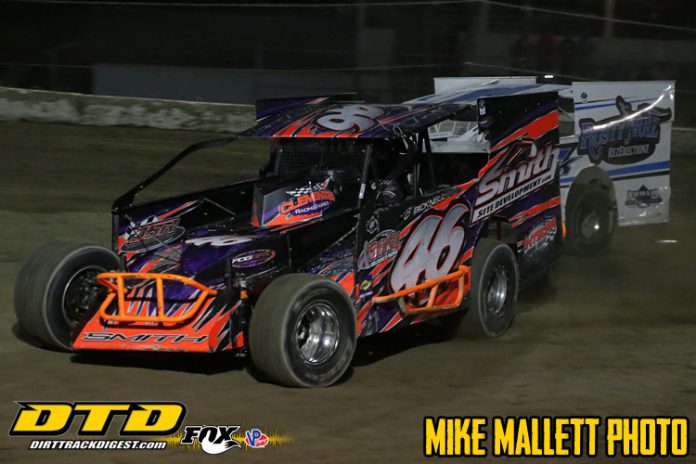 AFTON, NY – It’s been no secret that this racing season has not been the best for the Afton Motorsports Park. From a new racing surface that had to be removed after just three weeks of racing to the silty remains of that surface, which has continued to hinder the ability to race side by side. To drivers leaving the track and not returning because of the track surface and the inability to pass. Finally after the recent Short Track Super Series race, Brett Deyo of STSS told AMP track promoter Ronnie Ford that he had to do something about the racing surface or he would move the Short Track Super Nationals to another facility.

Track promoter Ford decided after hearing that from Deyo, looking things over and thinking about the track surface and what to do, decided to cancel the Friday August 3rd show. It rained on August 3rd so the show would have been cancelled anyway, due to weather.
The past two days ( August 4th & 5th ) Ford has been hard at work on the race track, removing more surface in an attempt to have a racy surface on Friday night August 10th. The hope is that this recent large removal of track surface will allow side by side racing to take place with less silt being present on the race track.

” I keep hearing all the time how people enjoy the racing and the atmosphere here at Afton Motorsports Park ” said track promoter Ronnie Ford. ” But now it’s even more important that if you care about Afton Motorsports Park, you need to come out and support the track this Friday night August 10th. Because being brutally honest with everyone, the track cannot continue to operate and stay open the way it has been of late. That is why I have titled Friday night as Pack the Track to Save Your Local Race Track Night. I encourage all racers and racing fans to come out and not only support Afton Motorsports Park but any local race track. Because local weekly short track auto racing is in trouble, not only here in this area but all over the United States. Racers and race fans need to realize this and get out and support your local race track before it closes, not only for the season but for good.”

Afton Motorsports Park will race this Friday night August 10th with ZMK Construction Modifieds, Chambers & O’ Hara Open Sportsman, Butler Auto Sales Crate Sportsman, The Trophy Guy IMCA Modifieds, Rinker Insurance Agency Street Stocks, and Four Cylinder Trucks on the racing card. Pit gates open at 4 pm, grandstands open at 4:30 pm, hot laps are at 6:15 pm and the first heat goes green at 7 pm sharp. Admission to the pits is $30 with no track license or membership required, grandstand admission is $12 for adults, seniors age 62 and older are $10, youth aged 9 to 14 are $5 and 8 and under are free with a paid adult admission.

There are only four point shows remaining on the 2018 racing schedule and the championship title is very tight in the Modified division. As Mitch Gibbs leads his future son in law Brett Tonkin by just four points, over in the IMCA Modified division it is even closer as Beau Ballard leads Tyler Stoddard by just one point, while in the Open Sportsman Claude Hutchings, Jr. leads Tyler Hart by just 21 points. Corey Cormier, Butch Green, and Ralph Cuozzo have comfortable point leads in the Open Sportsman, Street Stock, and Four Cylinder Truck divisions respectively.