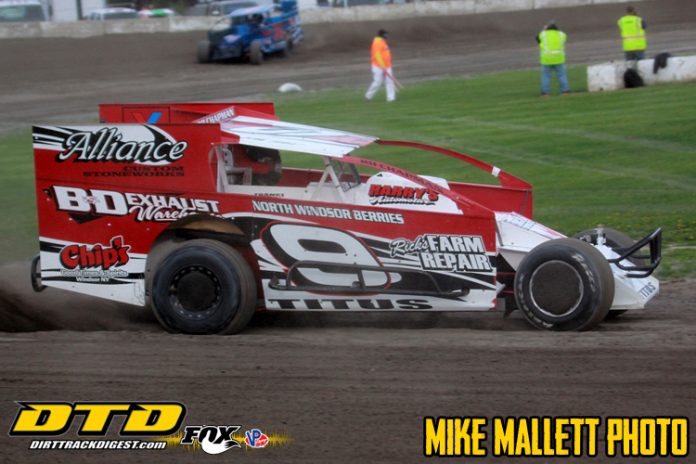 In the ZMK Construction Modifieds Kenny Titus won his first feature in three years as after once getting the lead from Jeff Sheeley. Titus running the extreme high side of the track ended up being on a uncontested Friday night drive.

The Chambers & O’ Hara Open Sportsman saw Craig Pope using his strong powerplant under the hood to lead the entire race to claim his second win of the year.
The Butler Auto Sales Crate Sportsman saw a first time winner in Rob Loucks. Rob driving for car owner Olin Renwick took the lead on a mid race restart and went on to his first career Crate Sportsman win.

The Trophy Guy IMCA Modifieds saw former Mini Sprint driver Bill Nichols drive to his first career feature win in the division, Bill led the entire distance holding off all challengers.
The Rinker Insurance Agency Street Stocks had the most competitive field of the year on hand. But that didn’t make Butch Green flinch as he came from mid pack to win his ninth feature of the year in easy fashion.


The Four Cylinder Trucks saw Ralph Cuozzo claim his eighth checker of the year in a dominating performance.

Kenny Titus and Jeff Sheeley brought the Modified 30 lap feature to green with Sheeley getting the jump on Titus. Behind them the action was exciting with drivers using three and sometime four grooves in their haste to get to the front.

Rusty Smith moved from seventh to third in three quarters of a lap to open the race. Right behind him was Mitch Gibbs who made a three wide backstretch pass to go from eighth to fifth.

The great starts of Smith and Gibbs were derailed when Smith got turned around by another racer exiting turn four to complete lap one. The incident stacked up the field and involved six other cars including the top two in points in Gibbs and Brett Tonkin. All cars continued with the exception of Gibbs who had severe damage to the front end and suspension, while Smith made a pit stop and returned.

On the restart Titus returned the favor and got the jump on Sheeley and took the lead with Nick Nye, Steve Babicek, and Alan Barker in tow.

The last restart of the race on lap four saw Titus once again out gun Sheeley to grab the lead with Nye chewing all over the back bumper of Sheeley while Babicek was holding off Darwin R. Greene for fourth.

Titus once in front moved to the extreme high side of the speedway and extended his lead by a full straightaway in a matter of a few laps. Electronic timing and scoring showed that Titus was a full half second faster than anyone on the track.

The battle for second intensified with Nye trying every move he knew to get around the crafty veteran Sheeley for second.

Meanwhile Rusty Smith was making some noise after pitting as he was coming back up through the field. Smith was able to race his way from 13th to fifth in just six laps and he still had 20 laps to go.

Nye after 15 laps of trying finally was able to pull off a nice move by driving hard into turn three on the outside. He then diamond off the corner and shot to the bottom to get under Sheely and take second with 19 laps in the books.

At the same time of the nice pass by Nye for second, Smith using the extreme high side got past Babicek for fourth.

Titus was comfortably in front with a full straightaway lead with ten laps to go. Nye was trying his best to make up ground and cut into the lead of Titus while Smith was left to race with Sheely for third.

With four laps to go Sheely bobbled entering turn three and that was all Smith needed as he darted underneath to grab third.

At the checkers Titus in for the very popular win over Nye, Smith, Sheeley, and Babicek.
Qualifying heat races were captured by Sheeley and Titus.

Clapperton using the outside groove moved around Hart for second on lap three and three laps later moved around Pickwick for third.

By the time Clapperton got to third, Pope and Rosa had opened up a full straightaway lead and were setting up their own private race for the lead.

Meanwhile a good race for fourth was taking place between Pickwick, his team mate Tyler Hart, and Claude Hutchings, Jr.

Everyone stayed basically where they were in the running order until two laps to go when the engine expired on the Hutchings machine. This relegated the point leader to last in the rundown and tightened up the points.

Pope in for the win over Rosa, Clapperton, Pickwick and Hart.

Pope and Clapperton won the heat races conducted earlier in the evening.

Craig Monroe and Kinser Hill brought the 20 lap Crate Sportsman to green. Hill after weeks of trying to find out his problem of being underpowered motored into the lead over Rob Loucks, Monroe, Fred Christ, and Blaine Klinger.

Klinger made a bold three wide pass work as he moved into third on lap three. At the same time Ryan Macartney moved into fifth and four laps later the teenage driver moved into fourth.

Division point leader Corey Cormier now threw his hat into the race for fifth after starting 11th on lap eight.

By lap nine a blanket could have been thrown over the top six of Hill, Loucks, Klinger, Macartney, Cormier, and Christ.

A lap ten double file restart saw Loucks using the outside groove to grab the lead, Macartney moved past Klinger for third.

Loucks who has been battling a handling problem with his car over the past few weeks, looked as if he figured out the problem. Once in front Loucks moved to the outside groove and opened up his lead to a comfortable margin.

Loucks in for the very popular win over Hill, Macartney, Klinger, and Cormier.

Heat races were won by Gary Smith and Hill earlier in the racing program.

Bill Nichols and Lenny Miller brought a season high car count of IMCA Modifieds to the green for their 20 lap feature.

Nichols moved into the lead over Jake Maynard, Gary Roberts, Beau Ballard, and Will Ward.

Tyler Stoddard moved past Ward on lap two for fifth and right on his heels was Logan Terry who started tenth.

The highly competitive feature featured many two and three car races all the way through the field. With Maynard racing Nichols for the lead while Roberts, Ballard, Stoddard, and Terry all racing for positions three, four, five , and six.

Mechanical woes on lap 14 sent Roberts pit side and when he pulled to the high side of the track to get into the pits, Stoddard got under Ballard for third.

On a lap 15 single file restart Maynard got underneath Nichols going into turn one in a move for the lead. Maynard going for his first win of the year got into the moisture lining the inside of the track and spun out to bring out the yellow.

The final five laps saw team mates Nichols and Stoddard race for the lead. At the checkers Nichols in for the win over Stoddard, Ballard, Terry, and Ward.

Teenager and second generation driver Fowlston moved into the lead over sixth place starter Dustin Harris, Briggs, eighth place starter Jerry Lobdell, Jr. and Dave Cronk.
Harris moved under Fowlston to grab the lead on lap two while Lobdell moved into third.
Butch Green who got mired in traffic to start the race and found himself in eighth on lap two moved into fourth with his patented high side back straight move on lap three.
Defending track champion Damon Decker made his first start of the year and he was starting to make his way to the front after starting tenth.

Lobdell made a three wide pass for the lead on lap 11 and two laps later and still in heavy lap traffic Green got under Harris for second.

Green would make a daring four wide pass for the lead on lap 15 and on lap 18, during a yellow flag period Harris pulled pit side.

The last two laps were anti climatic as Green raced to the win over Lobdell, Decker, Cronk, and Bob Crandall who was in this ride for the first time this year.

Brandon Loucks and Ralph Cuozzo brought the 15 lap Four Cylinder Truck feature to green.
Loucks who earlier in the evening saw his dad win the Crate Sportsman feature raced Cuozzo hard for the lead on the opening lap.

Cuozzo was able to fend off the teenager to lead the opening lap over Bob Crandall, Mitch Dumont, and Dylan Nichols, Crandall got past Loucks for second on lap two.

Cuozzo like he has all season long opened up a big lead once in front. Crandall all year long once in second has chewed on the back bumper of the Cuozzo Truck, but tonight it was different.

Crandall couldn’t get away from Loucks as these two put on an entertaining race for second over the final 13 laps of the race.

Cuozzo in for the win over Crandall, Loucks, Dumont, and Nichols.

Cuozzo swept the evening as he won the heat race.

NOTES; the plea to help save the race track worked with many new faces in the pit area and grandstands. After the racing program track promoter Ronnie Ford said that racing will continue at the track with three more point shows. Speaking of points, the point battles in the Modifieds, IMCA Modifieds, and Open Sportsman are very tight with a new Modified point leader after the racing, IMCA’s have a tie at the top, and in the Opens only a few points are between the top two. Point races in the Crates, Street Stocks, and Trucks saw the point leader extend their leads. Long distance tow award of the night and dedication to racing award of the night both goes to Mitch Dumont. Mitch is from Welland, Ontario, Canada and he races his Four Cylinder Truck at Humberstone weekly. He made the nearly six and half hour tow to come and support the track on this night and came home with a fourth place finish. Track in best condition of the year with still a little silt that was graded off and it led to racers being a full half second quicker in the feature than they were in the heats and very little dust to boot.

Afton Motorsports Park will be idle next Friday night August 17th due to the highly popular Delaware County Fair in Walton, NY.