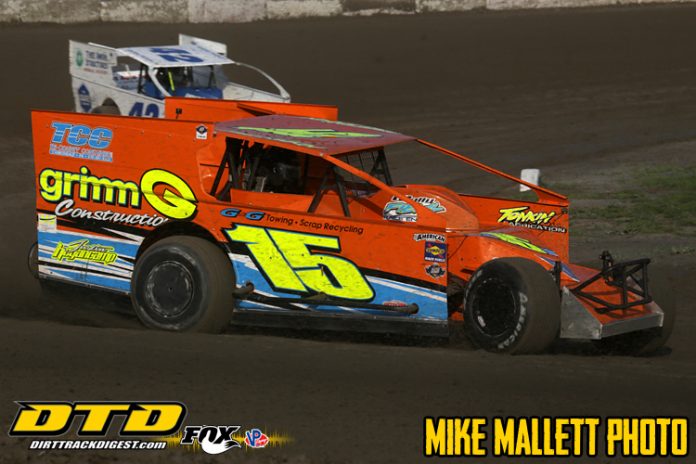 AFTON, NY – After having a week off due to the Delaware County Fair in Walton, NY, the Afton Motorsports Park returns to racing action this Friday night. On the action packed racing card will be six divisions of racing with three of the divisions featuring track championship point battles that would grab any race fans attention. Gates open at 4 pm, with hot laps at 6:15 pm, and racing starts at 7 pm.

In the ZMK Construction Modified division it is a three way race for the lucrative track championship and with three point races remaining, it’s anyone guess who will come out on top. Heading into this Fridays’ show Brett Tonkin is leading the points with 563, his future Father in Law, Mitch Gibbs is second with 557, and Rusty Smith is in third with 547. Sixteen points between the top three in points and this point battle will be worth the price of admission.

The Trophy Guy IMCA Modifieds, which uses the national IMCA Points sees two drivers tied at the top. Beau Ballard and Tyler Stoddard are tied with 365 points with three point shows remaining, with Jake Maynard in third with 353. Although car counts have been on the low side for this division, the racing action is very hotly contested.

In the Chambers & O’ Hara Open Sportsman division it is a two driver race for the championship. Defending and two time consecutive track champion Claude Hutchings, Jr. currently leads the points with 561. Third generation racer Tyler Hart has shown that consistency ( no feature wins ) also wins championships as he sits in second with 550 points. These two talented drivers will race very hard over the last three points races to see who comes out on top in the end.

The Butler Auto Sales Crate Sportsman sees Corey Cormier leading the way with 594 points. Gary Smith is second with 537, so he has a chance if Cormier stumbles over the next three weeks to grab the championship.

Butch Green has dominated the Rinker Insurance Agency Street Stocks all year long with nine feature wins and 636 points. Dustin Harris is second with 563 and is going to need plenty of help to make it interesting for the championship.

Ralph Cuozzo is trying to add to his Afton Motorsports Park Four Cylinder Truck track championships. Currently Cuozzo has eight feature wins and 684 points with his team mate Bob Crandall in second with 625. Anything can happen over the next three weeks and Crandall would love to swoop in and steal the championship away from Cuozzo.

Pit admission where no track license or membership is required is $30, grandstand admission is $12 with seniors age 62 and up $10, youth aged 9 to 14 are $5, and 8 and under are free with a paid adult admission.

Afton Motorsports Park will run on Friday August 31st and also on Friday September 7th, which is Championship Night. Both shows will feature an action packed six division show that is completed in a reasonable time frame.