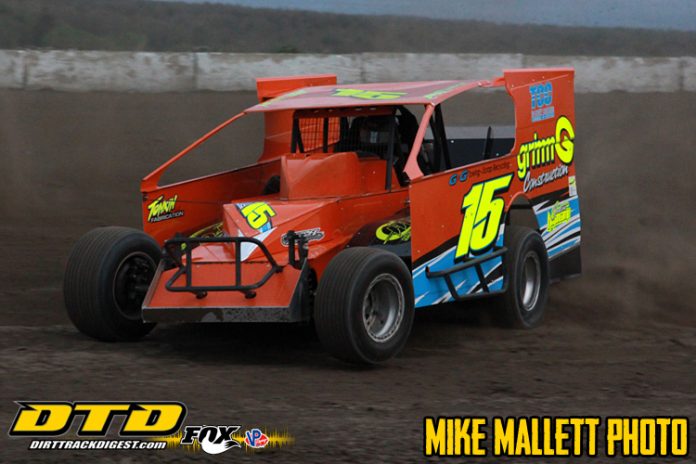 AFTON, NY – Afton Motorsports Park track promoter Ronnie Ford announced today that this Friday nights show at the Fairgrounds oval will be the season finale. Track champions will be determined in all six weekly divisions with Championship Points being awarded this Friday night.

Gates will open at 4 pm with hot laps starting at 6:15 pm and the first heat going green at 7 pm sharp.

” Yes, this was a very difficult decision ” said Ford on Sunday evening. ” We had great support back on August 10th and with the track better I was feeling good about running the final three races of the year. This past Friday night was the worst night attendance wise all year long and with going up against High School Football starting this Friday and then school opening the next week. I figured that it would be best that I call it a year this week, we have some very tight point races which should make Friday night really exciting. ”

In the ZMK Construction Modifieds there are seven drivers who have a mathematical shot at the championship. Going into Friday night Brett Tonkin leads with 615, Mitch Gibbs is second with 613, Rusty Smith has 585 in third, Nick Nye is fourth with 559, Darwin R. Greene is fifth with 558, JR Hurlburt is sixth with 553, and Craig Hanson is seventh with 539.

In the Chambers & O’Hara Open Sportsman there are five drivers in the running for the championship. Currently Tyler Hart leads with 602, Dave Rosa is second with 588, Dennis Clapperton is third with 580, Claude Hutchings, Jr. is fourth with 561, and Craig Pope is fifth 531.

Four drivers have a shot at the Butler Auto Sales Crate Sportsman championship. Currently Corey Cormier leads with 636, Gary Smith is second with 597, Blaine Klinger is third with 559, and Aaron Shelton is fourth with 557.

In the Rinker Insurance Agency Street Stocks Butch Green is the 2018 Track Champion.
In the Four Cylinder Trucks two drivers have a shot at the championship with Ralph Cuozzo leading with 740 and Bob Crandall is second with 673.

In these five divisions Championship Points will be awarded on Friday night with 100 points going to the winner and 20 points being given to the driver when they sign in.

The Trophy Guy IMCA Modifieds, go under national IMCA rules for point distribution and there are three drivers with a shot at the championship. Currently Beau Ballard leads with 399, Tyler Stoddard is second with 398, and Jake Maynard is third with 389. Points are awarded depending on car count with 11 points being given when they sign the car in.

Pit gates open at 4 pm, grandstand gates open at 4:30 pm, hot laps start at 6:15 pm, and the first heat goes green at 7 pm sharp. All feature race distances will be normal length that each class races in weekly.

For more information on Afton Motorsports Park log on to www.aftonmotorsportspark.com or call 607 – 624 – 3772.

Afton Motorsports Park is fast, fun, and furious..come check us out for the final time in 2018 this Friday night.