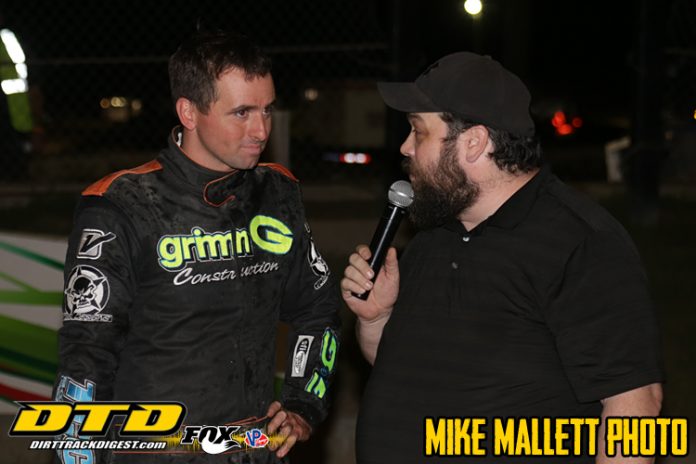 By JR KENNERUP​
AFTON, NY – This past Saturday night the curtain came down on the 2018 racing season at the Afton Motorsports Park as the season ending banquet was held at the Afton River Club.​

Following the buffet dinner Leon Andrus served as Master of Ceremonies for the festive evening as the top five in all divisions with the exception of the Four Cylinder Trucks, where the top three were recognized with customized plaques and point fund money.​

The ZMK Construction Modified division saw Carbondale, Pa. driver Brett Tonkin capture his second career track championship at the Afton oval. Tonkin indicated that he will be back with an all new Hig Fab Chassis to defend his track championship.​

In the Butler Auto Sales Crate Sportsman division Otisville, NY driver Corey Cormier made the weekly one hour and forty minute one way drive to Afton pay off with his first career Afton track championship. Cormier will be back to defend his title in 2019.​

The Chambers & O’ Hara Open Sportsman division produced a wild finish in the points. Going into the final night of points Dennis Clapperton of Oxford, NY was third and needed a win and a massive amount of help to win the points. Well that is exactly what happend as the second generation driver won his first career track championship. Dennis will be back to defend his title.​

Clapperton won one feature and wound up with 680 points. Dave Rosa used consistent finishes to end up second with no feature wins and 678 points. Bill Deckleman ended up winning three features and 604 points to end up in third. Craig Pope won two features to earn 603 points to finish fourth in points. Tyler Hart ended up fifth in points with no feature wins and 602 points.​

The Trophy Guy and Sports Connection IMCA Modifieds produced due to an ironic situation dealing with their sanctioning body, IMCA, two track champions in Beau Ballard and Tyler Stoddard.​

With the final point show for the division taking place during the IMCA Super Nationals, that nights race only counted for track points as IMCA National, Regional, and Track points were concluded the week prior.​

With all of these scenarios taking place Beau Ballard of Grand Gorge, NY with one feature win was declared and recognized by IMCA as the IMCA Track Champion and he will be back to defend his title.​

Kattelville, NY second generation driver Tyler Stoddard ended up winning two features and was named the Afton Track Champion. Stoddard who drove his dad’s car to a championship this past year will be back in the same equipment to defend his title.​
Stoddard and Ballard both ended up with 436 points.​

The Rinker Insurance Agency Street Stocks was dominated by Newark Valley, NY driver Butch Green wheeling the Jack Holcomb owned car to ten feature wins and the track championship. Green will be back to defend his title and 2019 will be his final season behind the wheel of a racecar.​

The Four Cylinder Truck division saw Bainbridge, NY driver Ralph Cuozzo dominate the division to capture the track championship and he will be back to defend his title.​
Cuozzo won nine features to capture 840 points. Bob Crandall ended up winning two features to take second in points with 768 markers. Rookie Brandon Loucks didn’t win a feature and ended up third in points with 728 points.​

During the racing season Most Popular Driver Ballots were in the Afton Motorsports Park Racing Program. Racefans who purchased a program filled out the most popular driver ballot for each division.​

BANQUET NOTES; track promoter Ford addressed the gathering of loyal track supporters and thanked them for sticking by the track during a difficult 2018 racing season. Ford also thanked sponsors who were in attendance and Rhonda Barringer of the Afton Driving Park ( Afton Fair ) who is a huge supporter of racing at the track. Also announced was that Leon Andrus will be back as the lead announcer in 2019. IMCA will be back to sanction that division in 2019. Real clay has been found and will be placed on the track when spring weather hits. GRIT Sportsman Series will have a show in June at the track while a Street Stock Pro Stock Challenge race will be held in May. As usual a quickly paced Afton Motorsports Park program with all awards over at 7:45 after starting with dinner at 6 pm sharp. Many attendees then spent the next three hours and fifteen minutes bench racing.​

For more information on Afton Motorsports Park please log on to the World Wide Web at www.aftonmotorsportspark.com or by calling 607 – 624 – 3772.​