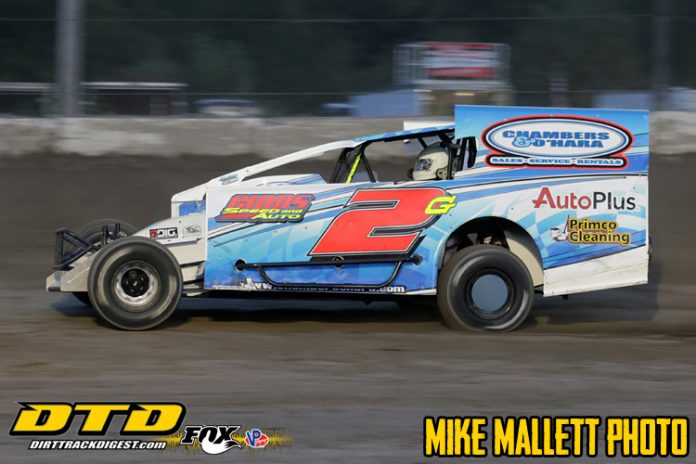 AFTON, NY – A great night of three and four wide racing treated the race fans this past Friday night at the Afton Motorsports Park (A.M.P.). Leading the way in the exciting action was the man they call the ‘Show Stopper’ Mitch Gibbs as he captured the win riding the high side of the speedway. Chris Jordan in the Open Sportsman blistered the speedway in a convincing feature win. The 602 Crate Sportsman it was A.J. Digsby in a very exciting feature victory. Butch Green in the Street Stock division and Tyler Stoddard in the IMCA division won their second feature of the year out of three that have been ran. Ralph Cuozzo stayed undefeated in the Four Cylinder Truck/Car division.

The night started out on a somber note as the race fans were asked to say a prayer in their own way for Ron Ford the promoter of the speedway and the rest of his family as his Mom passed away the previous night. In the ZMK Construction Modified division the feature started out with Tim Mayne and Kurt Decker occupying the front row. It took three tries to officially get the race started as the competitors were really anxious to get going. At the drop of the green Mayne got away with the lead with Decker holding strong on the top side of the speedway. By lap three third place starter Travis Smith and fourth place starter Mitch Gibbs both overtook Decker for second and third respectively. Decker running fourth now and Darwin Greene occupying the fifth spot. ‘Top Gun’ Travis Smith takes over the top spot on lap four and opens up a three-car advantage over Mayne and Gibbs in a torrid battle for second that Gibbs finally grabs running high on the speedway. Good racing going on throughout the field especially in the top ten as cars are swapping positions it seems like every lap. Gibbs rim-riding the top-side of the speedway takes the top spot away from Smith on lap nine and the two, race hard lap after lap. They stay this way until a caution on lap twenty for a spinning car. Smith regained the lead on lap twenty-one after the restart but was short lived as Gibbs running the top-side to perfection retook the top spot on twenty-two. At this point last week’s winner Brandon Waters is moving up through the pack as he was in the early jingle and had to restart from the rear. The top five at the finish was Gibbs, Smith, Walters, Greene and Mayne. Gibbs in victory lane says that it was great to get back here into the Mirabito Energy Products victory lane as he hasn’t got there since 2016.The two heats wins went to Tim Mayne and Kurt Decker.

In the Chamber’s & O’Hara Open Sportsman division the front row on the start was Olin Renwick and Craig Pope. Renwick powered away for the top spot at the drop of Scott Stevens green flag. Pope slid back at the start before getting back going. First caution came out on lap four as last week’s winner Jim Rockwell got into the front stretch wall and broke his rear end on his machine. Dave Rosa went to the rear at this point as track officials said that was the reason for Rothwell’s crash. At this point opening night winner Dennis Clapperton left the speedway also out for the night. After the restart Tyler Hart overtook Renwick for the top spot on lap five. Chris Jordan making his second start of the year takes over the top spot right after a caution came back out and starts to run-away in a very convincing feature win. Following Jordan across the line was for the top five were Brandon Kuhn who had a great late charge to the front, Dave Rosa who recovered to get back to third. Fourth was Renwick and fifth was Dan Burman. Jordan was quick to thank the Brandon Walters Modified crew for helping him it the pits in making some changes on his car. Heat race winners were Pope and Clapperton.

Brandon Loucks and Mike Grover brought the Rinker Insurance Agency Crate 602 Sportsman feature to the green. Loucks get the initial lead and stays out front holding off challenges from Gary Smith trying high and low to get by the youngster. On lap ten restart after Blaine Klinger and Mike Grover got together Loucks had the lead over Smith, Kinser Hill, Allan Hodge and Ryan Macartney. Smith gets by Loucks for lead on lap eleven at the same time A.J. Digsby comes alive from his eleventh starting spots and starts to pick them off one at a time. At the finish it was Digsby for his first of the year followed by Smith, Macartney, Hill and Steve Anderson rounding out the top five. Digsby was happy in victory lane and said he had a solid piece tonight and gave great credit to his crew. The three heats winners were Hodge, Macartney and Hill.

The Pit Stop Auto Street Stock event saw Bob Crandall and Steve Polhamus bring the starting field to the green. Butch Green opening night winner wasted no time from his fifth starting spot to grab the lead before lap one was complete as he used the bottom, middle and top to get by everyone. After five laps the first caution flew for a spinning car and the top five running order was Green, Jake Fowlston, Doug Polhamus, Donald Briggs and Steve Polhamus. After taking two tries to get back going after the lap five caution the rest of the way went non-stop with plenty of action behind the top two which was Green and Doug Polhamus who got by Fowlston after a few laps back under green. At the line after the twenty-lap feature it was Green, Doug Polhamus, Fowlston, Dave Cronk and Steve Polhamus. Green said that he wanted to get to the front fast and try to get his line and set his pace. The two heats were taken by Green and Cronk.


The Trophy Guy IMCA Modified division saw Eion Whitehead and J.T. Roe bring the field to green with Roe charging to the front sixth starting Jim Cumming charging to second after one complete. Roe went to high in turn two and Cummings takes the lead with Lenny Miller following through on the bottom. Beau Ballard starting to move into contention on lap three, as he started ninth and was up to third. At the halfway point it is Miller, now Tyler Stoddard the previous week winner fast approaching for second. Third know is opening night winner Matt Roberts, Ballard and Gary Roberts. Racing continued with a few cars rattling off one another and finally on lap nineteen Matt Roberts drops down pit road out of contention. A couple laps before that final caution Tyler Stoddard grabbed the lead and stayed there until the black and white silks waved. Stoddard gave credit once again to Dad and crew and mention how great the track is right now. Heat wins were captured by Ballard and Tyler Stoddard.

In the Four Cylinder Truck/Car division on this night was just trucks Had Pete Christiansen and Jeff Young on the front row of the fifteen-lap feature go. Eighth starting Ralph Cuozzo grab the lead at the stripe on lap one and cruise in for the third consecutive week. He has won them all. At the finish it was Cuozzo, Dylan Nichols, Christiansen, newcomer Dane Hedlund and Jerry Lanfair. Cuozzo spoke about it was good win as he remembered Eric Wagner and how much of a competitor he was. Cuozzo won the only heat also.

A.M.P. Notes; Every division had at least one new driver at the track and some more with the only exception being the IMCA division. The best finisher of the newcomers was a sixth-place finish by Corey Cormier making only his second start in a Modified. The first was the previous Sunday at Thunder Mountain for the Lightning on the Mountain event. Right behind him was Jeremy Smith making his first start at the track this season. In the Open Sportsman getting back into racing after a few years away was Danny Yankowski who ended early with mechanical woes. Also, in the Open division Tyler Hart with engine problems took over for Rob Loucks who has been filling in for Skip Pickwick. Leah Decker had a fine sixth place run in only her second start ever at the speedway.

The Slingshot division is added to the card this week with the Crate and Open Sportsman having their meet and greet down on the horse track. The Chenango County Law Enforcement Association will be on hand in the VIP Tower enjoying the action. They will give two bikes away to the youngsters and the grown-ups they are bringing a number of restaurant gift certificates to give away. Make sure when you come through the gate you get one of the special tickets. A huge thank you to those fine folks as Blue Lives do Matter.

Another note to add here as you take note of your schedule it says no racing for the Open Sportsman on the 14th and 21st but they have been added back on the schedule.

Finally, all the drivers and fans alike have been raving over the track surface and how wide the race track has been. Come check it out you won’t be sorry and the show it getting done at a reasonable hour. Modified division runs third every week and Friday the checkers dropped at 9:14PM. The entire show was in the books at 10:01PM. One last thing to add Modified, Open Sportsman and Crate Sportsman three weeks in and no repeat feature winner with still many to choose from. 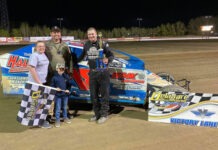 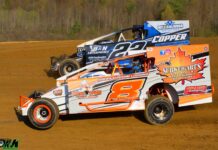 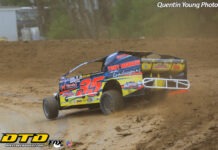